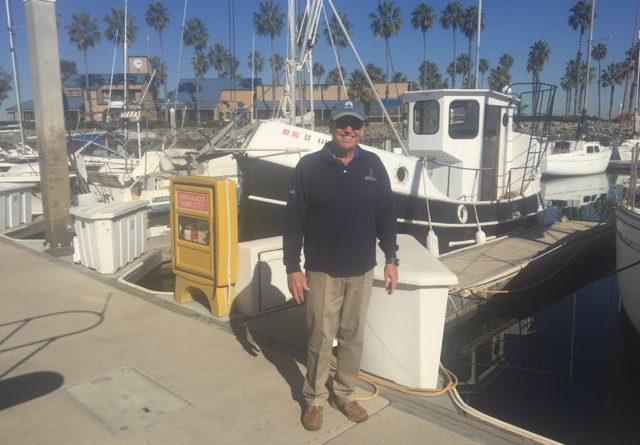 Mike Sullivan discusses the perks and pitfalls of working at Chula Vista Marina, his lifelong joy of sailing, and potential changes in the South Bay.

CHULA VISTA — Mike Sullivan, who has been a well-known active dockmaster at Chula Vista Marina for the past six years, retired on Dec. 31, 2017. Sullivan spent much of his time enjoying the benefits, as well as the challenges, of being dockmaster, including starting a much-needed boat concierge service and creating one-of-a-kind boating courses in the Marina Room.

With a background in broadcasting for 25 years, Sullivan told The Log his previous job utilized a lot of the same skills. Sullivan was familiar with the marina because he used to visit the restaurant with clients when he was a broadcaster.

Initially one might not see the connection, but Sullivan compared it to where in broadcast one is selling “air time or a theater of the mind – a non-tangible thing” to selling boat slips in a marina. In Chula Vista, selling slips can be a difficult task.

Chula Vista Marina is in a farther proximity to the ocean as well, about 10 miles away, which may also be a factor as to why it can be more difficult to find patrons to rent the slips. Another issue may be the proximity of the dock to the nearest fuel station. “Nearest fuel dock is 7 miles up the way,” Sullivan said, “but fuel is expensive.”

During the 70s, Sullivan built and taught others to sail Hobie Cats in Mission Bay, which developed his lifelong passion for sailing. In fact, the Baja Ha-Ha sailing event really impressed Sullivan and was partial motivation for him to retire.

Sullivan told The Log, “Chula Vista Marina is larger so Latitude 38 created Baja Ha-Ha to train people to cruise in a group. People from all over were able to come here. All the competitors were closer to my age, wrapping up their careers, sending the kids off to college. I would encourage those people to come here. It’s good motivation for the people on the dock and they motivated me to say, ‘hey, I’ve got to get out there.’”

While walking on the marina, Sullivan seemed to know each and every boat, regaling stories of boat owners ranging from marine biologists who came to Chula Vista to study plankton to young engineering types with the brains to revitalize quite old vessels.

Keeping the marina busy with plenty of activities for boaters to do has been one of Sullivan’s best accomplishments.

Chula Vista Marina has also had its fair share of problems with derelict boats, so Sullivan began a boat concierge service to help long-distance visitors upkeep their boats while they were away from the marina.

Sullivan also maintained the Marina Room with Bill Anderson to provide boating classes for boaters of all levels and ages to learn about safety, navigation, electronics and more.

Another fun event created by Sullivan was a dinghy poker run, complete with prize giveaways and dozens of participating boats. Sullivan also wrote the Chula Vista Marina newsletter because no one else wanted to take on the task.

In a lot of ways, Chula Vista Marina runs more like a yacht club than some of the other marinas in San Diego, but without the exclusivity.

At Chula Vista Marina liveaboards are popular and there is a revolving crowd of people since the RV resort is also a part of the marina for now. “People are thinking more of boating as liveaboard,” Sullivan said. “When you have a big boat, you turn it into a condominium and come in from Arizona or hot climates. Boating to me was always recreational and racing. Get back to the dock, have a drink or two, and go home. I never really thought of it as an option to liveaboard.”

Though Sullivan stays positive about the more enjoyable and exciting parts of his job, there have been some more difficult tasks to deal with as well. As a dockmaster, you are on call 24 hours a day and Sullivan had his fair share of calls in the middle of the night for emergencies where vessels had sunk.

“We recently had a very interesting emergency. There was an owner from Florida with a 82-foot 1952 Feadship trying to get it back to Netherlands to fix, but it popped a plank and security officers had to untie it to let it go down. I just heard it’s going into a box to be shipped to a boatyard in Scotland to have it completely refurbished. “

Another way recreational boating has changed over the years can be seen simply from the aging generations changing.

“The WWII-era have mostly aged out,” Sullivan said. “They knew how to fix everything and had no qualms about fixing everything themselves. If you have to start paying to do some of that stuff it gets really expensive. We’re not seeing the number of guys who can do all that stuff themselves.”

However, the younger generations seem to be revolving back around to the mentality of “mend it, fix it, make do or do without.”

Sullivan mentioned that some of the younger boaters are engineers with the intelligence to fix almost anything that breaks, but also some are embracing the internet age of knowledge. “Now you can log onto YouTube and see how to rebuild a carburetor from 1979, so if you go on YouTube you can see all that.”

With the changes in recreational boating, Sullivan also hinted at change that may be coming to Chula Vista. The renovations that are being undertaken at Port of San Diego, Chula Vista is on a track similar.

“[I think the city is] Trying to create another Seaport Village. There are some rumors starting that the RV Park may move and the new construction may impact the Chula Vista hotels.”

In the future, Sullivan wants to travel and spend time with family. “I have a daughter in Hawaii. My wife’s family is in Boston and they have a house on an island in Maine.”

For the time being, it is unknown who will take over Sullivan’s position as dockmaster. “There are 100 people who would want this job tomorrow. I’m going to miss it for sure.”

With a change of hands from one dockmaster to the next, there is sure to be more in store for Chula Vista. Mike Sullivan would like to stay active in boating events and other passions that call to him, so the residents of Chula Vista Marina will likely keep seeing his name as he enjoys his retirement.