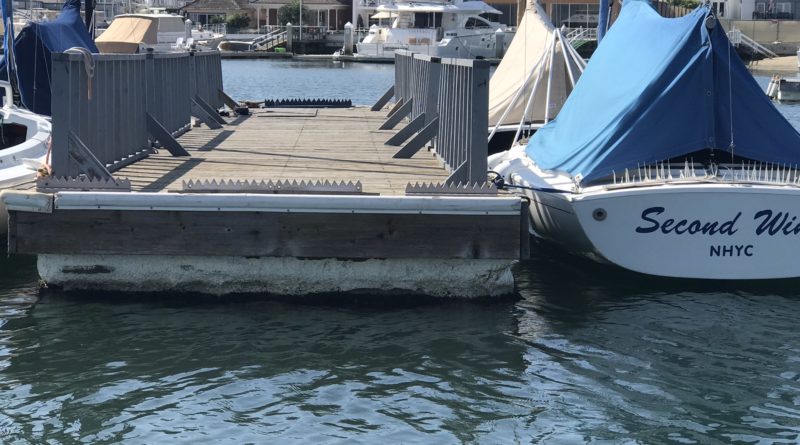 One floating dock in Newport Beach Harbor had a wooden bar at its far ends (white or grey colored) and fencing along the broadsides. The bar replaced spiked nails placed along the dock’s edges as a sea lion deterrent.

Nails used as spikes on the perimeter of docks in Newport Harbor were removed, but is the replacement legal?

NEWPORT BEACH — A group of floating docks near Newport Harbor Yacht Club in Newport Beach, which previously had the sharp end of nails used as stakes along their perimeter, were removed. The Log reported on the docks in our June 15-28 issue, showing images of the sharp end of nails sticking upwards and spaced closely together along the perimeter of each dock. Newport Beach city staff was quoted in our coverage, stating the nails used as stakes were an illegal sea lion deterrent.

The Log navigated to the floating docks on Aug. 16 to visually determine whether the nails were still there. None of the docks were spiked with nails (sharpened side up). At least two of the docks had minimal defense measures. There appeared to be a thin wire wrapped around the perimeter, elevated about one inch above the dock and held up with small screws (sharp end down).

Two of the docks had a pair of wooden bars with jagged/pointed edges at the top at its far ends (see photos). The alternative deterrent measures appear to be an improvement from the nails-as-stakes defense mechanism. Whether the wooden bars are consistent with city code and federal policy, however, is yet to be determined. The city of Newport Beach did force the owner of the floating docks to remove the nail stakes. Would city officials consider these wooden bars with a jagged-edged top to also be a violation of city code? Is this a second violation of law? These answers have not yet been answered by city officials? 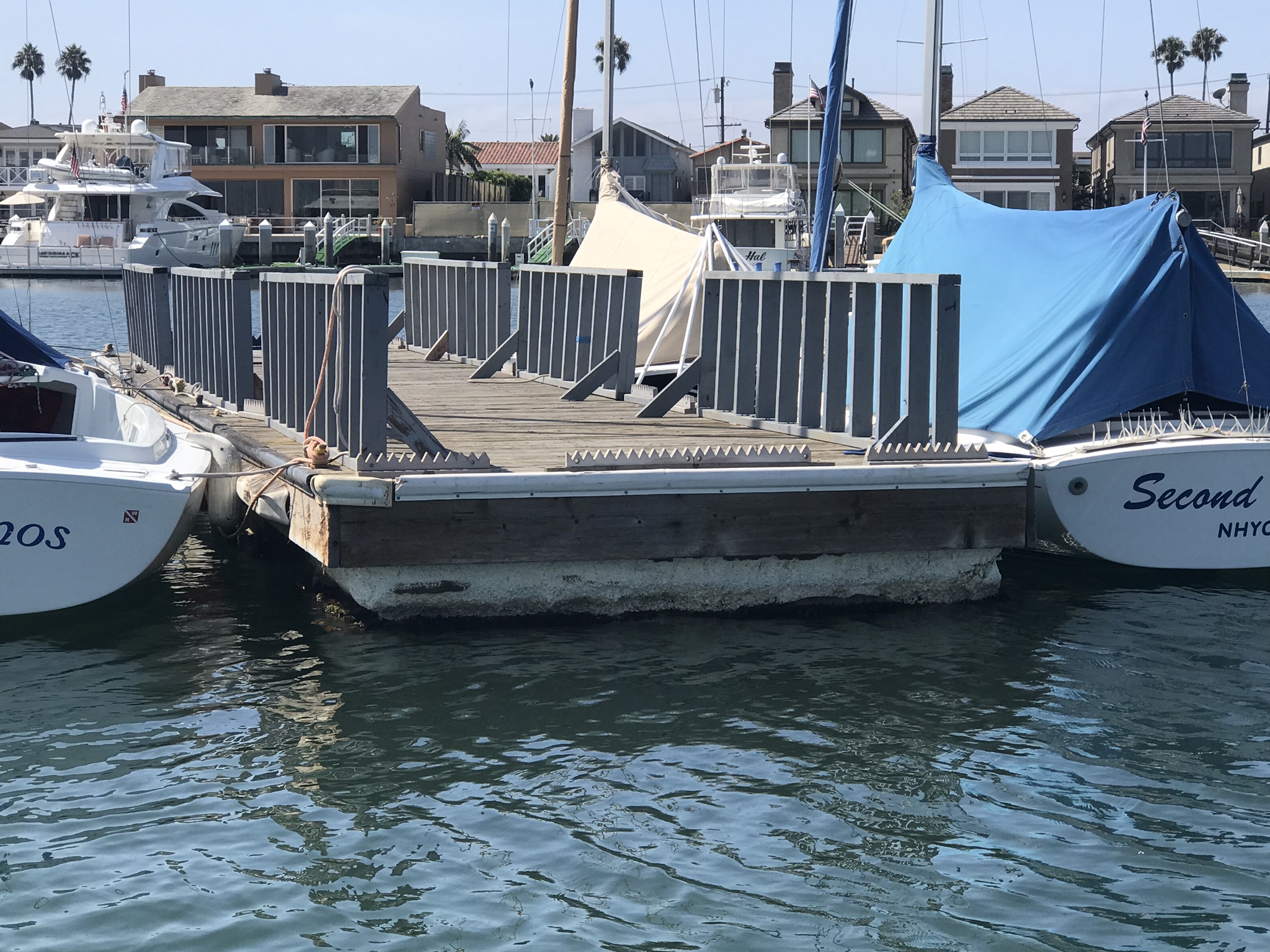 The Log observed at least one boat at the docks with NHYC – or Newport Harbor YC – designated as its home base.

The question is whether the jagged edged wooden bars would be considered legal within federal guidelines for sea lion deterrents (as established by the National Oceanic and Atmospheric Administration, or NOAA).

NOAA specifically lists objects that are sharp and pointed as a deterrent to avoid using.

The Log is inquiring as to whether the current deterrents on the floating docks are legal. Sources familiar with Newport Beach city codes and NOAA’s approved/unapproved deterrent measures did not immediately respond to The Log’s questions.

Sea lions, as mentioned in The Log’s June 15-28 issue, “are a protected species under federal law (Marine Mammal Protection Act, or MMPA).

“Anyone who has questions on best techniques to deter sea lions should contact their local harbor patrol or law enforcement office,” The Log’s initial article on sea lion deterrents stated. “NOAA’s West Coast Fisheries office in Long Beach is also available for advisement or guidance; the office can be reached at 562-980-4050.”

“The report of the nails on the floating dock was responded to promptly and the nails have been removed,” Mary Locey, a spokesperson for Newport Beach, told The Log in an email. “The Harbor Department staff is actively patrolling the harbor. As code violations are witnessed or reported, staff is following the city’s established protocols to gain compliance by issuing a notice of violation. If the violation is not cleared, a citation can be issued which includes a fine starting at $100 and up to $500.”

“The City Council approved the creation of the Harbor Department on July 10,” Locey stated in her email to The Log. “One of the first steps was to temporarily relocate the city’s Code Enforcement Supervisor to work with and train the department’s staff on addressing code violations in the harbor.”

Lt. Christopher Corn added code enforcement in the harbor is the responsibility of city and county officials.

“Both the city code enforcement and the Sheriff’s Harbor Patrol have the authority to enforce city municipal codes in the harbor,” Corn stated in an email to The Log.

5 thoughts on “Docks with sea lion deterrents have been altered”