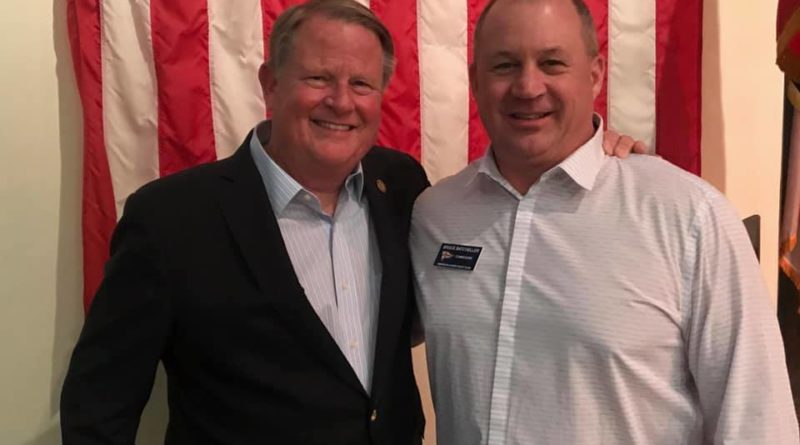 NEWPORT BEACH—Dredging and harbor management – these are the two drums Newport Beach City Council member Marshall “Duffy” Duffield has been beating since he became a policymaker and thought leader in one of Orange County’s most recognizable cities.

The city council member who was born and raised in Newport Beach spent about two hours speaking to the membership of the American Legion Yacht Club on Feb. 13. Much of his presentation focused on Duffield’s youth, when he spent time on the local harbor and eventually invented the electric boat known as the “Duffy.”

But some of Duffield’s comments here at American Legion YC’s Feb. 13 dinner focused on his two specific goals as a policymaker.

“My whole goal is to manage the harbor and get it to its designed dredge depth,” Duffield, who spent 10 years on Newport Beach Harbor Commission and five years (so far) on the City Council, said. “Those are my two issues. I’m not a politician. I’m not going to be a Congressman or a Senator or any of that.”

Duffield said his biggest complaint is the lack of boating representation on the dais. Newport Beach’s City Council was lacking in mariner experience just before Duffield’s election to the dais in 2014. (Brad Avery, another experienced mariner, would be elected to the council a few years later.)

“The tendency of the last 30 years for council was to avoid the [Newport] Bay at all costs. It was complaint-based management,” Duffield told the crowd of about 150 people here at American Legion Yacht Club in Newport Beach. “For a long time, you could almost get away with that, but today … on any given July afternoon … are you kidding me. There are more people having fun and doing different things than we have ever experienced.

“We need to manage our harbor again,” Duffield continued.

The city of Newport Beach, accordingly, needs to rely upon more than law enforcement to effectively manage the harbor area, Duffield said. He pointed to the creation of a Harbor Department and the work city leaders are putting into the updating of Title 17 (which regulates who can do what on the harbor).

“We don’t want to run around and tell people to stop having fun, but what we do have to do is, when you’re having too much fun, and you may not know what you’re doing is wrong, we just need somebody to come up and say, ‘if you keep doing this, we’re going to have to cite you,’” Duffield said.

The Newport Beach City Council member said the new harbormaster is working hard to ensure people observe of the rules of the road and everyone has a great time on the harbor.

Dredging was also one of Duffield’s talking points at the American Legion Yacht Club dinner. He pointed out the harbor was first dredged to its design depth in 1936.

“It has never been to that design depth since that time,” Duffield said. “One of my goals is to try to get it there.”

Duffield, who served as Newport Beach’s mayor in 2018, said the city spent four years and $2 million of taxpayer money to campaign federal officials in Washington, D.C. to commit $23 million for the city’s long-term dredging efforts. The campaign has not yet been successful, but Duffield does believe Newport Beach’s efforts will yield positive results sooner than later.

He also spoke about sediment buildup in Upper Newport Bay, a solar-powered trash-collecting vessel (to pick up marine debris) and how he built a company around his invention, the Duffy boat.