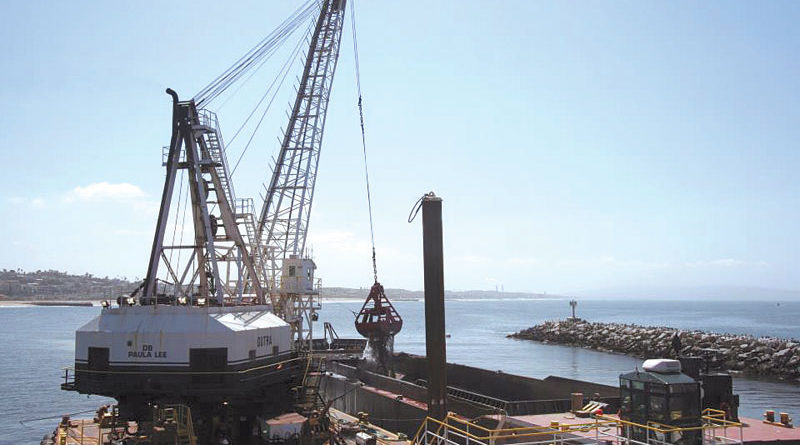 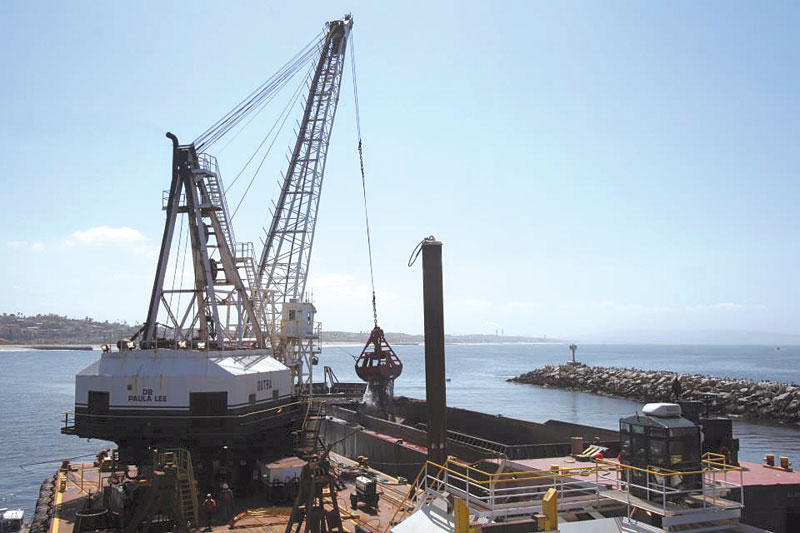 So far, more than 220,000 of the 1 million cubic yards of sediment scheduled for removal has been dredged from the harbor’s entrance, with the initial work focusing on Marina del Rey’s south entrance point.

“What they’ve started doing is clearing from the seaward side in, starting at the south entrance and up the south side of the channel,” said Army Corps of Engineers Public Affairs officer Greg Fuderer.

The $13 million project is expected to help improve the navigation abilities of first responders such as Coast Guard vessels, Baywatch lifeguard boats and Los Angeles County Sheriff’s Marina del Rey Marine Patrol vessels, which are often hindered by shoaling at the harbor entrances.

Depending on tides, larger vessels entering or exiting the harbor are often limited to the channel’s north entrance, as sediment buildup over the years has continued to impair harbor navigability.

Los Angeles County Lifeguards receive numerous calls each year reporting vessels running aground at the Marina del Rey harbor entrance, which was last dredged in 1999. Since then, more than 1 million cubic yards of sediment from the surrounding beaches and Ballona Creek has settled around the channel entrance, making many recreational boaters’ trips in and out of the harbor a stressful activity.

Along with improvements to navigability, the dredging project will improve the harbor’s environmental habitat. More than 500,000 cubic yards of the sediment earmarked for removal has been deemed unsuitable for ocean disposal due to pollution or grain size and will be barged to the Port of Long Beach’s Middle Harbor project, to be used as fill material.

The port has been requesting sediment from outside sources to fill in nearly 54 acres of water area between marine terminals at Piers E and F in Long Beach Harbor, where the port plans to create land to build a modern shipping terminal.

Long Beach Harbor’s $1.2 billion project is on a tight schedule. Marina del Rey is working to get its sediment to the Port of Long Beach by the end of June, to meet the port’s timeline.

Los Angeles County Department of Beaches and Harbors director Santos Kreimann said the project has been running smoothly so far, with San Rafael-based Dutra Dredging Co., the Army Corps of Engineers and the county meeting weekly to discuss the project’s progress.

“The Harbor Patrol has been doing a good job of communicating with the boaters, and making them aware of where they should go in and out of the marina,” Kreimann said.

While both channel entrances will remain open during the dredging, Fuderer noted that boats should give the dredger and accompanying barges a wide berth, staying a safe distance away from the equipment.

One problem that arose during the early portions of the dredging involved boaters anchoring out just inside the south entrance along the breakwall — a bit too close for comfort for the barges taking sediment out of the harbor.

“Unfortunately, those boats anchoring there are in the way or very close to the route the barges are taking, so the dredging operators have asked for assistance to get boats out of there,” Fuderer said. “The dredge attempts to stay out of the channel as much as it can, but safety is the most important factor here.”

As Paula Lee works through the south entrance, the clamshell excavator will then begin to dredge the north entrance before finishing the job in the Marina del Rey’s main channel.

About 75,000 cubic yards of the sand sediment will then be placed on shore between the jetty and the beach area, roughly at Ruby Street. The remaining 100,000 cubic yards will be disposed of offshore in a “pit” area, which can be utilized for future beach restoration needs.