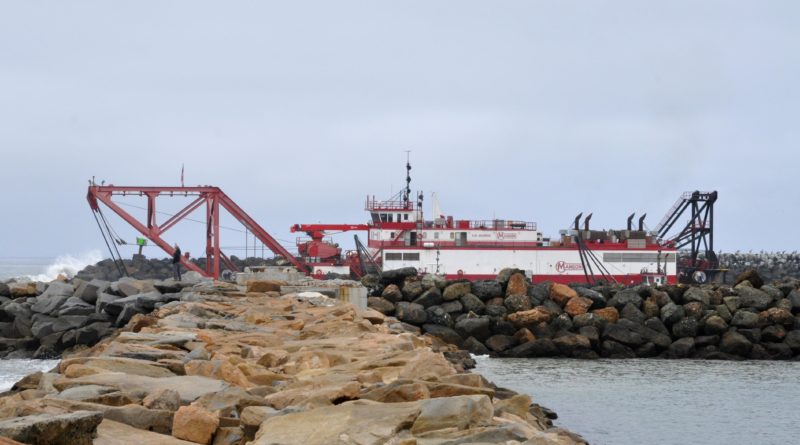 Army Corps and Oceanside’s harbor manager Ted Schiafone confirmed dredging will begin in fall. In addition, the Army Corps also presented plans for a contract to ensure annual dredging operations are met for the next three to four years. (U.S. Army Corps of Engineering photo)

OCEANSIDE — Dena M. O’Dell, the deputy chief of public affairs for Los Angeles District of U.S. Army Corps of Engineers, sent a statement to The Log on Friday, Aug. 24 announcing the federal agency’s intention to begin dredging operations at Oceanside Harbor in fall.

In the statement, it was revealed Mason Construction will be the contractor and the amount for the estimated dredging would be about $3.5 million. Dredging in Oceanside Harbor is an annual project but has been delayed since May 2018.

According to the Army Corps, the presence of the endangered bird species the California least tern is present in the area through September. Protecting the species, which is affected by dredging, could have been part of the reason to delay action.

The statement continued: “Survey crews have been monitoring the harbor’s entrance channel on a periodic basis to ensure sufficient depth for safe navigation. Results from a July 30 survey indicated a significant amount of shoaling around the south jetty tip, and the western portion of the entrance channel was at a depth of 16 feet.”

The Army Corps further stated safety is the “number one priority.”

Harbor Division Manager Ted Schiafone also told The Log on Aug. 29 in an email correspondence, that the Army Corps solidified plans to dredge Oceanside Harbor after meeting with harbor staff.

“Yesterday [Aug. 28] we met with Colonel Aaron C. Barta, Commander and District Engineer for the Army Corp and David M. Van Dorpe, Deputy District Engineer,” Schiafone stated. “They confirmed that Mason will dredge the Oceanside Harbor Channel in late September/early October.  This dredge will cost $3.5 million dollars. They expect to dredge approximately 180,000 cubic yards of material and open the channel to 22-foot in depth. This clean material will be placed on Oceanside beaches. We expect to see Manson begin mobilization of pipe and equipment soon after the Harbor Days event that takes place on September 15 and 16.”

In addition, Schiafone said during the meeting the Army Corps plans for a three- to four-year contract, of which they will seek bids in February 2019.

“The first dredge of this contract is expected to occur in April/May of 2019,” Schiafone said. “Based on the amount of funding available, including contributed funds from the city of Oceanside, the Army Corp could dredge up to approximately 400,000 cubic yards of clean material and place it on Oceanside beaches.”

Though some city staff had previously expressed annoyance with the Army Corps’ handling of the dredging assignment, Schiafone felt differently.

“I am very pleased the Army Corp has acted quickly to resolve this issue,” he said. “We look forward to seeing them next spring at Oceanside Harbor.”