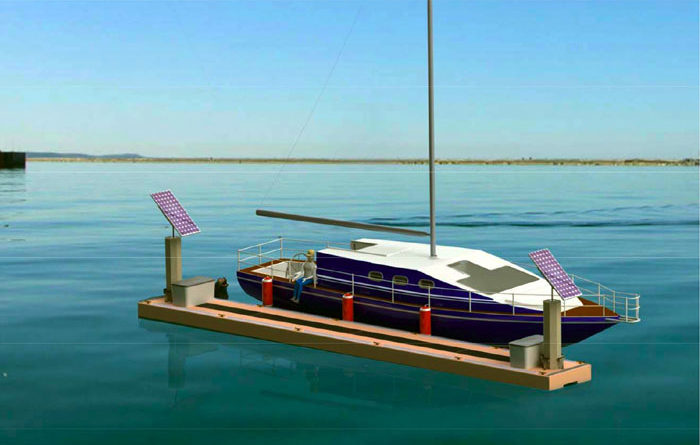 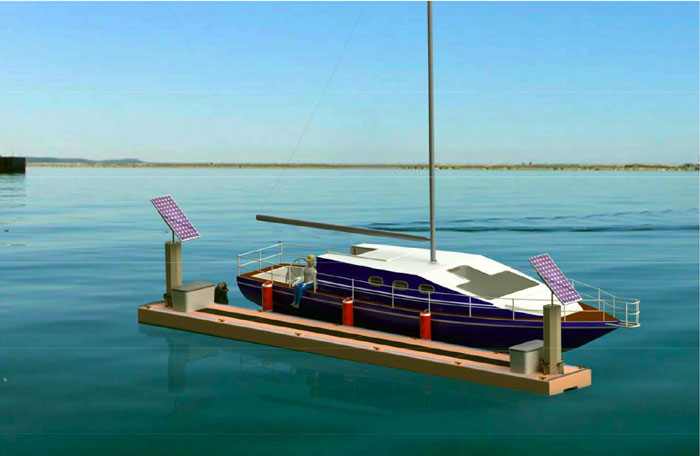 NEWPORT BEACH — There may be a solution to the angst experienced by sailors transiting the sometimes congested channels and mooring fields of Newport Harbor, according to Marshall Duffield, the creator of Duffy electric boats.

His experience with trying to navigate through the crowded harbor, mixed with his knowledge of local waters and the boat-building industry, led to a recent “ah-ha moment.”

“I see the future of boat storage changing,” he said. “Marina owners are replacing their old docks to provide space for 50-footers and even longer (boats,) if they have room. The dock I propose would allow for different sizes, as demand comes and goes.”

Duffield presented an idea to replace Newport Harbor’s existing moorings with individual fiberglass docks at the March 13 Newport Beach Harbor Commission meeting. The move, he believes, would “condense” areas currently taken up by mooring fields and open up the bay waterways.

“Essentially cutting all the mooring fields by 50 percent while keeping the same number of permitted holders would add back precious open water for everyone, instead of a chosen few,” he said. “Here’s a chance to make the harbor bigger — and the moorings safer and more practical for boating.”

Each of Duffield’s proposed all-fiberglass docks — called a “Duffy Dock” — would be 6 feet wide and 50 feet long, with an option to construct an additional 10 feet of dock to accommodate larger vessels. Vessels on moorings now average from 35 to 40 feet in length.

The proposed docks would have the capability of accommodating several vessels of different sizes: for example, as many as six 20-foot boats, Duffield told the Harbor Commission during his presentation.

Duffield said there are several advantages to the fiberglass dock system, including low-maintenance construction. The dock will not rot, will be durable, will be unsinkable and will contain built-in sea lion deterrents, he explained.

Built to allow light to penetrate to the ocean floor, the docks are designed to have nontoxic ceramic bottom coating to detract barnacle growth. They will also include LED lighting for security and aid to navigation, and they will contain solar panels for battery charging.

Boater amenities such as freshwater and shore power hookups, and storage dock boxes are proposed for each dock. “Securing your boat easily to a safe dock with electricity and water would go along way in helping to justify the cost,” Duffield said.

The hookup-equipped docks would provide boaters with a place to wash down their vessels and refill their water tanks, Duffield said. “Boats need at least one washdown per month, to protect their value and usability, however boats on moorings rarely get washed.”

The docks also would have non-corroding composite pilings made from fiberglass rods and recycled plastics, as opposed to concrete and steel piles that can corrode, Duffield said. And twice-yearly maintenance of mooring tackle would no longer be required, he said.

In his presentation to harbor commissioners, Duffield showed images of the current mooring field configurations, along with images of what the fields would look like if the city switched over to the fiberglass docks.

Along with having corrosion-free fiberglass construction, the Duffy Dock’s single-point system would solve other frustrations often voiced by boaters, Duffield explained. Spreader lines that are currently hazards to powerboat props and sailboat keels would no longer be an issue — and mooring uses would not have to worry about trying to catch both their boat’s bow and stern lines, which can be a challenge during windy nights.

A side-tie floating dock is projected to cost $5,000, however, that price may be reduced if two or more boats share the dock.             “I think this is the most positive thing that the Harbor Commission has seen in 11 years,” said Harbor Commissioner Ralph Rodheim. “We have talked about floating marinas, we have talked about how to open up the marina for children and Sabots and sailboats and motorboats in everything that we have done, and we know from Newport Harbor Yacht Club’s experiment that a floating dock works. At face value and conceptually, I think it is absolutely fabulous.”

Harbor commissioners praised the idea in concept, but they agreed that more vetting was necessary before the idea could be presented to city council members.

Among the issues that may be raised: Liveaboards would have neighbors if they were tied up to floating docks, and residents would no longer have views of single boats bobbing on moorings but instead would see a cluster of boats tied to a dock.

When Harbor Commission chairman Doug West asked if Duffield had a prototype of the dock ready to show the commission, the Newport Beach resident explained one was not currently under construction. He hopes to receive some insight and the go-ahead from the city council before embarking on the intricate construction of a prototype.

Otherwise, “this may not make it out the door,” Duffield said, adding that the project that would require a large investment of funding and time.

However, a day after the Harbor Commission meeting, Duffield decided to forge ahead and build a prototype of the Duffy Dock. A patent is pending on the dock design.

“We decided to do it,” Duffield said, adding that the idea may be “a tad self-serving” because he wants to be able to use the dock himself. The experienced boater said he has had trouble in the past with mooring his sailboat.

“The current that I experience off Bayshores gets to be so radical, I struggle at times to get on my mooring,” he said. “Having a dock is much more practical.”

Duffield said the difficulties sailors face when tying up to their moorings can sometimes make boaters decide to skip a day out on the water, to skip the hassle. And mooring holders may face the same quandary Duffield has found himself in: Should they sell the mooring and move to a slip, or hold onto their coveted mooring?

Duffield anticipates building the Duffy Dock prototype this summer. Construction could take up to three months.

“This is a very intriguing idea that might change the economics in the harbor,” West said. “This would offer a better option for people who have to write a slip check every month.”

West, along with harbor commissioners Brad Avery and Rodheim, agreed to discuss the new option with representatives from the Orange County Sheriff’s Harbor Patrol and the Newport Mooring Association. The subcommittee will return to the commission with ideas on how to implement with the new dock concept.

“This would set the stage for a modern Newport Harbor — and, with the raising of the taxes, this is the first thing that I’ve seen where the city is thinking outside the box,” Rodheim said. “Here is the city doing something positive for the boaters.”

The offshore dock concept would need the city council’s approval for implementation.