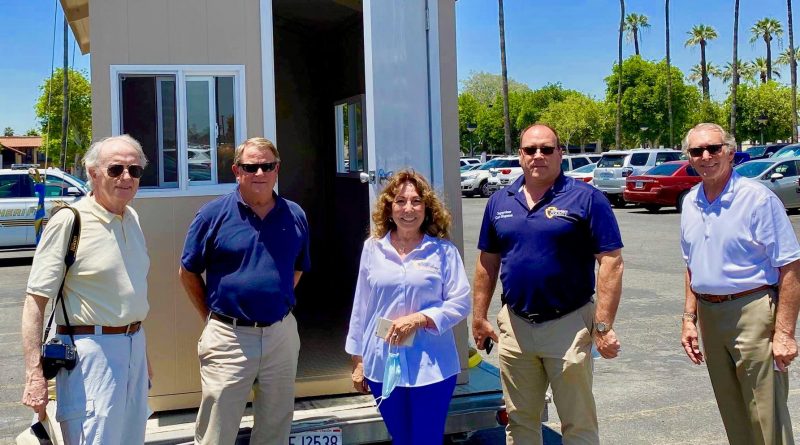 Small homes made of fiberglass – called SafeHuts – could be used by cities and counties to provide shelter for homeless populations.

NEWPORT BEACH—Marshall “Duffy” Duffield revolutionized the boating industry when he invented those popular electric boats seen darting around harbors such as Newport Beach or Long Beach. Duffield then made some noise in 2014, when he unseated Newport Beach Mayor Rush Hill from the local city council. The council member is back in the news cycle again, this time with another inventive act: SafeHuts.

Duffield, who has manufactured more than 30,000 Duffy boats at his factory in the High Desert, hopes his SafeHuts invention will be a tool to address homelessness. SafeHuts is a temporary shelter made of fiberglass.

The temporary homes are still in early production phase. Initial huts would be equipped with one or two beds; a single occupancy shelter would measure 60 square feet in size, compared to 80 square feet for a double bed.

Duffield, in a conversation with The Log, said he hopes cities and counties would purchase SafeHuts to help address homelessness.

“We’re in the introductory process with cities and counties. We’ve made a few prototypes,” Duffield told The Log in a phone call, adding his manufacturing facility could produce 20 SafeHuts per day.

Each SafeHut could be repeatedly torn down and reassembled and moved around.

Duffield added the fiberglass crafted SafeHuts might be slightly more expensive than other temporary shelters on the market, but each unit comes with greater longevity. The Newport Beach council member and former mayor would not reveal the exact cost and price of the SafeHuts.

Duffield was also practical about entering this space to address homelessness. He acknowledged no one company could build enough shelters to address homelessness – the growing rate of people becoming homeless outpaces a company’s ability to build shelters. Duffield, accordingly, expects to be one of the many temporary shelter players on the market.

The Duffy boat inventor came up with the idea of SafeHuts during his time on the City Council. He said the city of Newport Beach couldn’t address the people sleeping on the local pier. City staff and local law enforcement couldn’t really do anything about the issue without providing proper shelter. (It’s not enough, for example, for a Newport Beach police officer to tell a homeless person to vacate a public space.)

Duffield added there aren’t any standardized requirements of what qualifies as a shelter. Yes, there are some guidelines, but nothing is standardized. So, how do you legally conform and comply when there really aren’t any rules?

Some cities were providing tents as shelters. Others offered free hotel rooms. But Duffield felt the need to create a more effective solution, so he and his team designed and engineered a one-person unit about three months ago. The first prototype was manufactured a few weeks ago. Duffield said he has since received substantial interest in SafeHuts.

Federal money could available for cities and counties to purchase SafeHuts, so Duffield expects local and regional governments to be the first in line to buy his temporary shelters. SafeHuts, however, would also be available to private vendors, Duffield said.

A website for the temporary shelters – www.safehuts.com – is already up and running. One section of the site states there are as many as 150,000 homeless people in California and 560,000 nationally.

The SafeHuts – which was described in marketing materials as waterproof, secure, insulated, study and “bridge housing for your most vulnerable population” – come with several features and options.