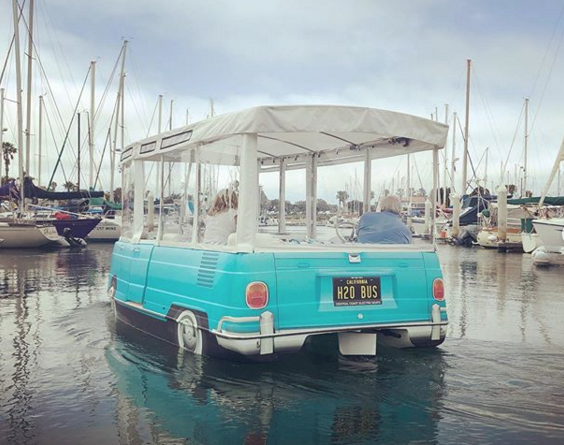 OXNARD—The concept of a car navigating on water has been around for decades. Pres. Lyndon B. Johnson, for example, was known to own a car that doubled as a boat – he’d be driving on land one moment and then navigating the same vehicle as a vessel the next moment. James Bond once drove a high-end sports car into the water, only to have it convert into a submarine once submerged under water. A few boat-vehicle prototypes have been introduced throughout the years, as well. Frank Laza is the latest to have something that looks like a vehicle on the water – though what he’s navigating is actually a Duffy made to look like a Volkswagen Bus.

Laza is the owner of Central Coast Electric Boats, which is located at Channel Islands Harbor in Oxnard. He and his wife spent the better part of one year redesigning a 1996 Duffy Cat 16 Electric Boat to look like a classic 1967 VW Bus.

The Duffy redesign is turquoise in color. It look just like a VW van, complete with a smoke machine to create exhaust, stereo system to project a motor revving sound, original steering and knob, underwater lights to glow during night cruises and a knot-meter repurposed to resemble a speedometer.

Oh, and the redesigned Duffy even has a “vanity license plate” – it reads “H20 BUS.”

“In all the years we’ve been doing this at the Harbor we haven’t had a boat of our own,” Laza said in a story about his electric boat, published on the Channel Islands Harbor website. “We’ve had boats that we’ve bought and sold. It’s our business. When this project came along, we’ve decided to just keep it.”

The Duffy came to them in 2018. It was submerged in a lake after a torrential rainstorm. Laza and his wife bought the boat and began a complete redesign – electrical work, upholstery, dashboard, everything.

The entire boat, save for the original shell, is brand new. Laza took the boat to a company in Westlake Village for the final touch – make the exterior look like a 1967 VW Kombi Van.

People have since taken notice of the VW-looking electric boat, as it’s been on the water for about one month now. Laza told Channel Islands Harbor staff he’d look to make at least one more addition: a Beatles yellow submarine. Stay tuned to see if they can pull off that project.