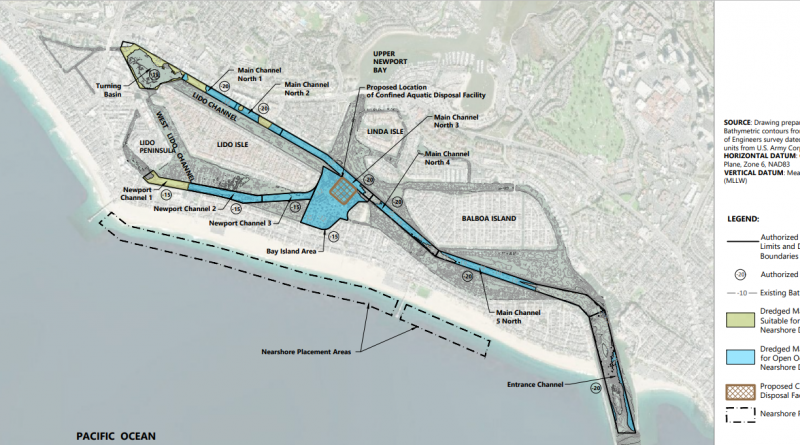 Map highlights areas to be dredged, where contaminated material is and where the proposed confined aquatic disposal facility would be located. Map prepared by Bing maps

The confined aquatic disposal site would provide a location to put dredged material from the Lower Newport Harbor that is unsuitable for open ocean disposal due to elevated concentrations of polychlorinated biphenyls (PCBs) and/or mercury.

NEWPORT BEACH— The Newport Beach Harbor Commission has approved a recommendation that the City Council certify an Environmental Impact Report for a dredging project and the construction of a confined aquatic disposal (CAD) facility in the Lower Newport Harbor. The dredging project would remove approximately 1.2 million cubic yards of sediment within the Main Channel and channel offshoots to reestablish authorized navigation depths. Most of the material has been determined to be suitable for disposal in a controlled open ocean disposal site about six miles from the Entrance Channel or along the city’s ocean beaches.

However, approximately 106,900 cubic yards of bottom material is unsuitable due to elevated concentrations of polychlorinated biphenyls (PCBs) or mercury. To manage this unsuitable material, the city has proposed to construct a CAD in the central portion of the Lower Harbor between Bay Island, Harbor Island, and Lido Isle.

“You dig a deep hole, you place sediment inside, and then you place a cap of clean, dredged material on top,” said Public Works Manager Chris Miller at the Harbor Commission meeting.

After all the material from the dredging project has been placed within the CAD, an interim cap layer will be placed on top and the CAD will remain open, yet unused, for approximately two years. There will then be a second opportunity during a six-month period for the city and its residents to place up to an additional 50,000 cubic yards of material into the CAD. At the end of the six-month placement period, the city will place a final cap layer at least 3 feet thick to further isolate the underlying sediments from the overlying water column.

The project is estimated to cost $20 million.

A draft EIR identifying the potential environmental impacts of this proposal was completed and circulated for a 47-day public review period that began on Dec.4, 2020. According to a staff report, the draft EIR found the project would not result in any significant and unavoidable impacts. As required, the EIR also presented five alternatives.

“Hearing one of the options that I don’t know that anybody’s looked at so far, that Mr. Lucky presented, is looking at the private sector, people that are affected by this, are they willing to step up and do something to clean up the harbor and help in that process for possibly a better solution?” said Commissioner Ira Beer.

In a 6-1 vote, with Commissioner Beer abstaining, the commission approved a recommendation that the City Council certify the EIR.

The commissioners collectively agreed the dredging needed to occur and the project needed to continue to move forward.

“I feel that process [CAD] is going to be a long-term fix at no release of these containments,” said Commissioner Don Yahn.

In a separate action, the commission voted to establish an ad-hoc committee to explore the potential for involving the public in assisting the city in remediating the contamination, as presented by the public during the comment period.
“There’s nothing that says we can’t go down a dual path and if Mr. Lucky and/or someone else from the general public wants to step in and take the contaminated materials and we can make this better, then that works great, but I don’t think at this point we derail the freight train,” said Commission Chair Bill Kenney.

A complete copy of the draft EIR can be found at newportbeachca.gov/harbordredging.