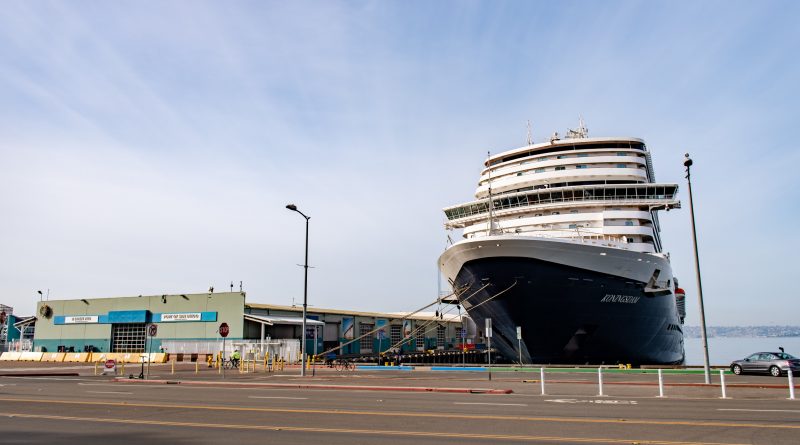 The visits are part of the cruise lines’ operations to reestablish the ships in U.S. waters and a prerequisite to resume cruising in the future.

SAN PEDRO—As the page turned on 2020, the new year began with uncertainty remaining for the many industries still impacted by the coronavirus, including tourism. Cruise ships have cruised around and docked in the Port of Los Angeles and the Port of San Diego the past few weeks; a sight not seen in more than eight months. The vessels have not been carrying thousands of vacationing passengers, only crew members as the cruise ship industry awaits approval to resume operations in Southern California and other U.S. ports.

Several Holland America Line (HAL) ships and one Princess Cruises also periodically docked at the B Street Cruise Terminal in San Diego for fuel, food, supplies, and/or services in December and early January. None of the vessels carried passengers and crew members aboard the vessels were not allowed off unless as part of crew changes.

Officials with ports said the visits were part of the cruise lines’ operations to reestablish the ships in U.S. waters as a prerequisite to meet federal regulations in order to resume cruising in the future. All future sailings are pending approval by the Center for Disease Control, the Coast Guard, U.S. Customs and Border Protection, and County Health and Human Services Agency. The CDC recently issued a Framework for Conditional Sailing Order, outlining a phased resumption of cruise ship passenger operations but so far, no date has been set yet for U.S. passenger sailings.

Cruise ships are also a major economic driver in San Diego, where there were 119 cancelled cruises since March 2020, resulting in a loss of roughly $200 million in regional economic activity.