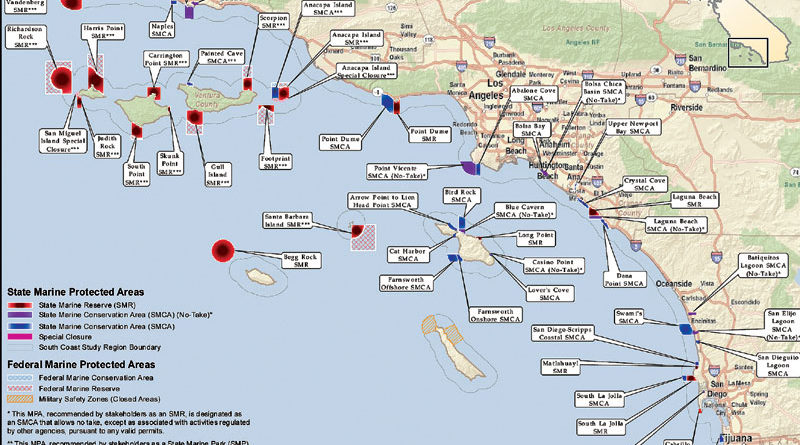 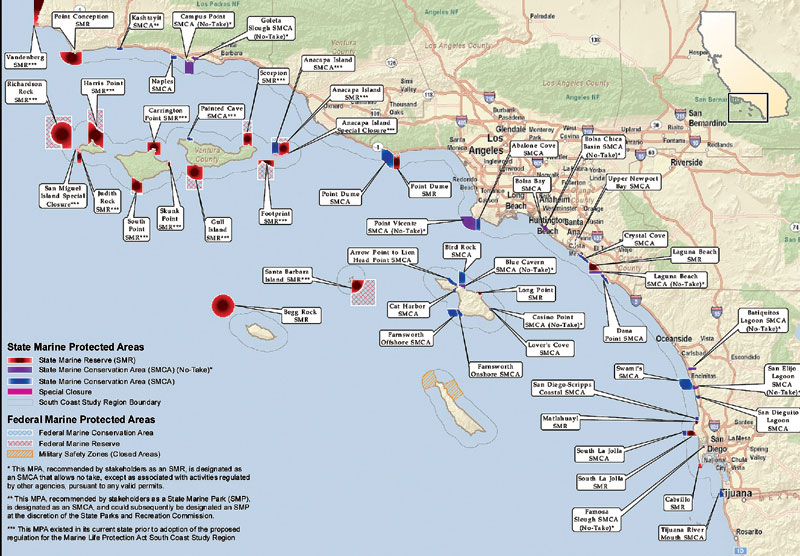 SACRAMENTO — The California Department of Fish and Game announced Dec. 12 that the final wording of regulations to implement new Marine Protected Areas (MPAs) in California’s South Coast Region has been approved by the state’s Office of Administrative Law (OAL). Enforcement of the regulations closing approximately 15 percent of California’s coastline to recreational fishing will be carried out starting Jan. 1.

The California Fish and Game Commission originally voted on Dec. 15, 2010 to approve regulations creating the South Coast Region’s series of no-take zones throughout Southern California, stretching from Point Conception to the Mexico border.

While the regulations were originally scheduled to be implemented in October 2011, the OAL rejected the first version of South Coast Region regulations, formulated under a process created after the passage of the California Marine Life Protection Act (MLPA) initiative. Enforcement could not take place until OAL approval was secured.

The OAL cited a number of reasons for its initial rejection of the South Coast Region regulations, including the Fish and Game Commission’s failure to provide reasons for rejecting alternative MPA plans that were considered in the planning process, failure to respond to all of the public comments made regarding the closures, failure to form a statement of specific purpose for adoption of each closure and failure to explain why each provision of the adopted regulations is required to carry out the MLPA’s goal. A new regulation documentation package was prepared to address these issues, and OAL approval was obtained.

Developed under provisions in the MLPA, the network of 50 MPAs (including 13 pre-existing MPAs retained at the northern Channel Islands) and two special closures covers approximately 354 square miles of state waters, and is just one piece of the system of fishing closures spanning the California coast. Once implemented, the South Coast MPAs will join the MPAs currently in place, from the Central and North Central Coast study regions, to form a network closing approximately 875 miles of coastal waters to fishing.

In MPAs where commercial lobster fishing will be prohibited, commercial lobster traps may remain in the water until Jan. 6 if the doors to the traps are wired open, the trap is unbaited, the buoy remains at the surface of the ocean and no attempt is made to take spiny lobsters.

Jordan Traverso of the Department of Fish and Game said citation amounts will vary based on the individual infraction and court fees, and he noted that the fine is set by the county judge who hears the case.

“It is always at the warden’s discretion, based on the information they may have about a violator — for example, whether it’s a first offense or if they know the person is a repeat offender,” Traverso said.

The MPA network, which was originally estimated to cost California around $275,000 a year to run, may actually require millions of dollars in additional funding from the state for proper enforcement and monitoring to be implemented. Despite this, the Fish and Game Commission moved forward with its approval vote last year, acknowledging that it had no knowledge of whether adequate funding would become available for the program.

Throughout the highly contentious process to establish new MPAs, both recreational and commercial angling groups recommended less drastic closures, and they asked that any action to restrict fishing be based on valid scientific research.

There were numerous claims that public input received in a long series of stakeholder meetings was not adequately considered, and that many of the final recommendations from participants in the unique public/private process were ultimately rejected by the commission. Many participants in the MLPA meetings continue to claim that the method for determining what areas to close and what areas to keep open has not been an open and fair process.

The Partnership for Sustainable Oceans — a organization formed by multiple sportfishing groups nationwide — has legally challenged the validity of the Marine Life Protection Act process, in the implementation of the North Central Coast MPAs and the South Coast MPAs.

Coastside Fishing Club, one of the three petitioners in litigation in Superior Court in San Diego challenging MLPA regulations adopted by the California Fish and Game Commission for the North Central Coast, filed an appeal with California’s Fourth District Court of Appeals.

Coastside Fishing Club’s appeal arises from the denial by Judge Ronald Prager on Oct. 17, 2011 of its request for a Writ of Mandate voiding MLPA regulations adopted by the commission for California’s North Central Coast in 2009, based on legal defects in implementing California law.

Fishing club members said Judge Prager’s ruling is inconsistent with the mandates of the law as established by the legislature, and the outcome of the appeal of Judge Prager’s ruling on the North Central Coast regulations could influence the resolution of a similar challenge to the validity of the South Coast regulations brought in the same lawsuit by Coastside Fishing Club’s co-plaintiffs, United Anglers of Southern California and Robert C. Fletcher.

“It’s in the best interests of all Californians that our state’s laws be implemented in a fair and even-handed manner, as the legislature directs,” said Rick Ross, president of Coastside Fishing Club. “Coastside intends to pursue this legitimate goal through all available legal means. We strongly believe in the merits of our case, and the appeal process provides a fresh opportunity to have our claims considered in a different forum.”

The appeal process will likely be ongoing until late 2012, long after enforcement of the South Coast closures begins.

“The only true hope California’s fishing and boating community has left to stop these impending Marine Protected Areas from existing in perpetuity is to support our legal effort,” said Dave Elm, chairman of United Anglers of Southern California.

The Department of Fish and Game has developed an MPA mobile website showing anglers where new MPAs will go into effect Jan. 1. It can be found at dfg.ca.gov/m/MPA.

The mobile website allows anglers to search for any current MPA by name, county or general area to find information about the MPA’s boundaries and regulations, and use an interactive map to locate any MPA. Mobile device users can also find and track their current location using the device’s GPS, to determine whether or not the user is currently located within an MPA, and read a summary of regulations or the complete regulations for any MPA.