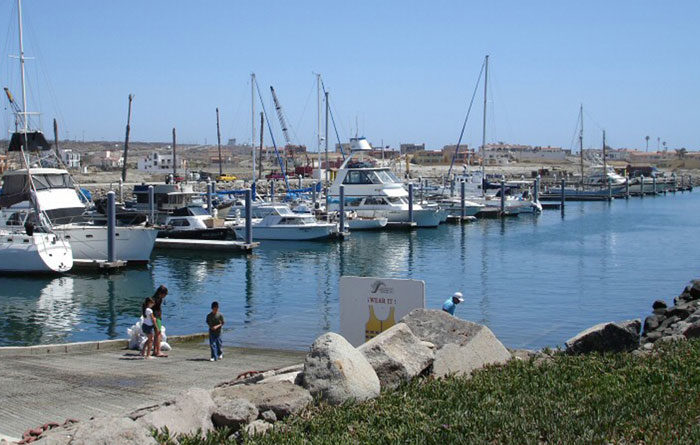 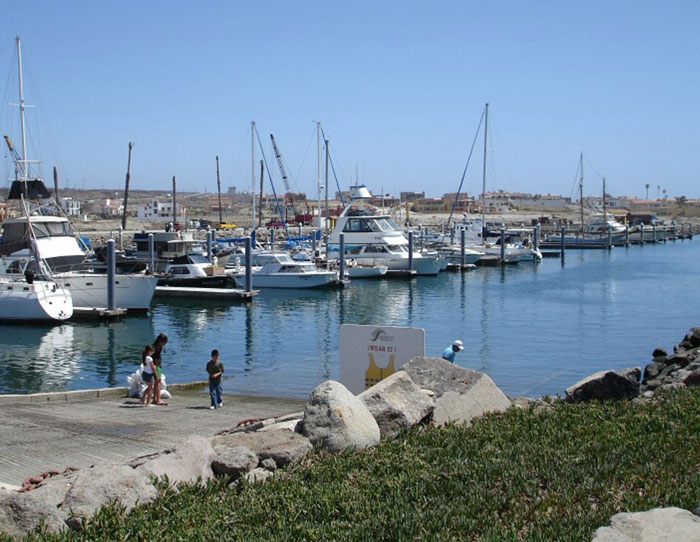 PUERTO SALINA, BAJA CALIFORNIA NORTE — One sailboat participating in this year’s Newport-to-Ensenada Race was nearly destroyed when an attempt to cruise into a marina north of Ensenada resulted in a grounding at a shoal-filled and virtually landlocked facility. The incident revealed a serious but little-known navigation hazard for boaters along Northern Baja California’s Pacific Coast.

Puerto Salina marina tenants have reported that boat groundings are commonplace in this area, since dredging operations at the entrance channel have been stalled for almost half a year. And with no breakwater to surround the facility, vessels that run aground here often get caught in the surf break.

On April 27, Vessel Assist San Diego responded to a call of a boat possibly on the rocks at the entrance to the marina. Capt. Eric Lamb, the race safety boat captain for Vessel Assist, and his deckhand departed Ensenada for the marina — and when they got there, they found the sailboat Why Knot aground.

“We actually hit bottom when we went in,” Capt. Lamb said. “And we only draw two-and-a-half feet on our 33 foot boat.”             Marina tenants have reported that shoaling has been occurring here for the past three years. A dredging attempt fell short five months ago, after dredging equipment fell into disrepair.

The channel has become a local surfing hot spot — and a little-known-about hazard for vessels unfamiliar with the area.

“It’s a direct feed from the swells coming in, so the buildup is shoal after shoal after shoal of sand that’s washed in there,” Capt. Lamb said. “It’s a landlocked marina at this point, with a lot of boats down there that can’t get out — and haven’t been able to get out over a year now.”

Why Knot, a 40-foot Catalina sailboat, was attempting to pull into the marina when it ran aground. The channel is an estimated quarter-mile long before it turns into the marina.

Vessel Assist San Diego arrived at the scene at 5 p.m. and found six passengers — four men, one woman and a 12-year-old boy — aboard the sailboat. The vessel owner and crew had dropped anchor, but the sailboat continued to slip — and its stern was going toward the rocks on the south side of the jetty, Capt. Lamb said. The vessel had lost its steerage and the keel was cracked.

Capt. Lamb brought four passengers aboard the tow boat. The boat’s owner and deckhand stood aboard Why Knot, dropping a second anchor on the other side of the channel, which they used to pull the boat away from the rocks.

“We were just trying to keep the stern from crashing into the rock walls,” Capt. Lamb explained. “Once we did that, we were able to stand by and wait for the tide to come up.”

It was 10 p.m. before the boat could be towed into the marina, and that was only due to an extreme high tide. Why Knot was put into a slip and the boat owner was to have the insurance company access the damage. The boat was not hauled out because the owners did not want to chance the vessel sinking.

The Mexican navy stood by for assistance but was not able to enter the channel, due to the shoaling. U.S. Coast Guard Sector San Diego dispatched a helicopter to the scene, in case emergency assistance was required to evacuate the boaters.

Capt. Pat Rains, who writes Sea Magazine’s monthly Mexico Report column, is the author of Mexico Boating Guide, which provides cruisers with information on entering the channel. In the most recent guide, the channel depth was reported by marina officials to be dredged to 12 feet with 9 feet inside. But Capt. Rains cautioned that marina tenants reported only a 6-foot maximum depth.

“That entrance has been a problem, and they have had to keep a dredge going,” Capt. Rains said. She added that she has not visited the marina for several months.

In the latest edition of her book, Capt. Rains advised boaters to call this marina for depths before attempting to enter the channel and marina. The angle of the entrance channel requires constant maintenance dredging, she added, similar to Oceanside Harbor.

“If they don’t keep the dredge going, it’s liable to just fill up with sand,” she said.

According to the Puerto Salina website, the marina is owned by Grumar, a company that has “more than 50 years of specializing in the construction of real estate projects at an international level.” The 212-slip marina offers boat slips from 36 to 60 feet in length.

Capt. Lamb said he has heard from several people with boats in the marina, who said that they are stuck and left with few options. They have complained of dilapidated docks and little to no water.

A night after Why Knot’s grounding, a 30-foot sailboat became caught in 4 feet of sand, and it was only able to sail away from the marina after 2.5 hours, Capt. Lamb said he learned from area boaters.

Capt. Lamb advised skippers of vessels considering making a stop at Puerto Salina to continue cruising past it. Many boaters cruise into the channel to enter the marina, thinking they can sail smoothly in to port because they see the masts from other sailboats.

What they don’t know is that the boats docked in the marina have no way out, he said. The view is misleading.