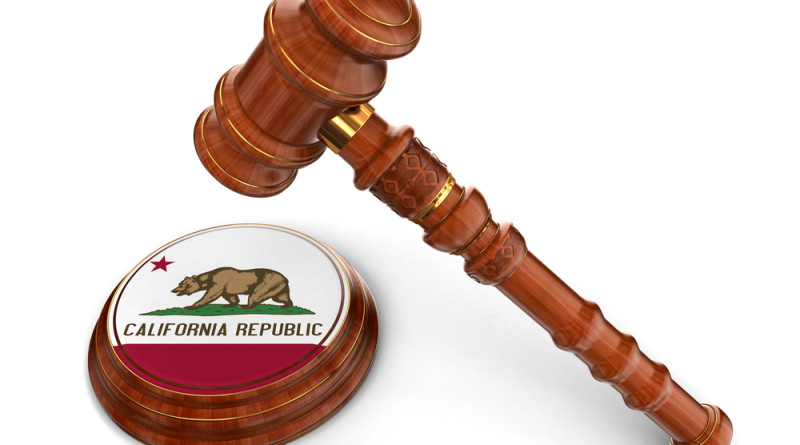 SACRAMENTO — The practice of privately communicating with parties of interests during California Coastal Commission deliberations is still alive and kicking after a bill proposing to ban ex parte communications failed to gather enough support among state legislators.

Senate Bill 1190 (SB 1190), introduced earlier this year by State Sen. Hannah-Beth Jackson (D-Santa Barbara), aimed to permanently prohibit commissioners from engaging in private talks with developers, lobbyists and other interested parties ahead of deciding on development projects in front of the commission.

The other members who supported SB 1190 in the final committee vote were among the 17 legislators who did not participate in the Aug. 31 decision.

The State Senate approved the initial proposal in May, but, after progressing through committees in the State Assembly, was placed on the suspense file on Aug. 3.

An amended version of SB 1190 was approved eight days later; the new version of the bill would allow ex parte communications in some circumstances.

Accordingly SB 1190 was not sent to Gov. Jerry Brown’s desk and any attempts to restrict or ban ex parte communications at the Coastal Commission would be put on hold until the next legislative session at the earliest, if at all.

Jackson proposed the full ban in February as an attempt to make the commission more transparent. The commission’s integrity was brought into question after its executive director, Charles Lester, was dismissed without explanation on Feb. 10.

Commissioners were specifically accused of being beholden to developers, lobbyists and special interests since the deliberations surrounding Lester’s dismissal were not made public.

Many believed Lester, considered by many as a strong defender of environmental interests, was dismissed to allow the Coastal Commission to ease restrictions on coastal development.

Eliminating ex parte communications, Jackson hoped with SB 1190, would allow Coastal Commission deliberations to be conducted in the open and prevent private parties who have a stake in decisions from potentially influencing votes.

The failure of SB 1190 means coastal commissioners can continue engaging in private discussions with developers, lobbyists and other parties of interests.

A review of the Coastal Commission’s current roster revealed seven of the 12 commissioners and all of the voting alternates accept ex parte communications from interested parties. 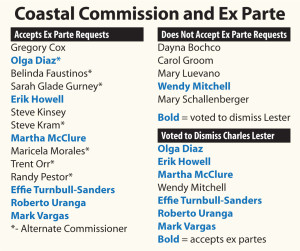 Mitchell is the only commissioner to not accept ex parte requests and voted in favor of ousting Lester as the commission’s executive director in February.

Uranga told The Log ex parte communications offer him an opportunity to hear from all parties affected by the commission’s deliberations.

“It’s a process that helps both sides. It provides an opportunity … to state their case,” said Uranga, adding he has met with developers, environmentalists, neighbors and other groups.

Ex parte communications are becoming a hot button issue within the city of Los Angeles, where Council member David Ryu is separately pushing to regulate private discussions between developers and elected or appointed officials.

On Sept. 7 Ryu presented a motion to the Los Angeles City Council to revisit a 2007 recommendation make “permanent changes” to how ex parte communications function within the city’s Planning Commission.

“Today, we see commissioners frequently conducting ex-parte meetings on sensitive development issues and this has consistently been one of the lightning rods for public criticism and legal action in our development process,” Ryu stated in his motion.

“There is a glaring structural problem in our work when developers can contact commissioners outside of commission meetings and make their case in private. Behind closed doors ex parte communications with appointed planning commissioners as well as other quasi-judicial decision making commissions should be prohibited,” his motion continued.

Ryu’s motion referenced a City Council request to the City Attorney’s office in 2007 “to report on ethics considerations and legal ramifications” of ex parte communications between developers and planning commissioners.

The City Attorney recommended “multiple changes” be made to the ex parte communications process in order to “improve transparency and due process.”

However the council never heard the City Attorney report and it eventually expired.

Efforts to revive the report in 2009 also failed.

“We now have an opportunity to revisit these recommendations made by the City Attorney in 2007 and many current and former elected Los Angeles leaders, and make permanent changes that will increase faith in our development process and in the quasi-judicial and quasi-adjudicative actions taken by our city commissions,” Ryu said in his motion.