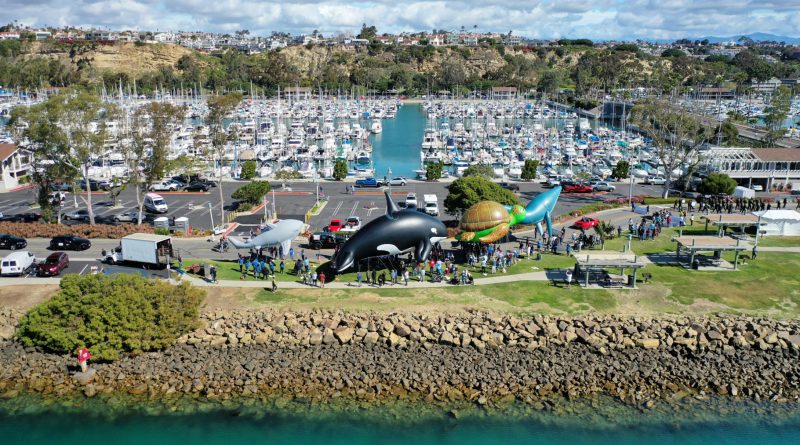 DANA POINT一 The Festival of Whales will continue a 50-year legacy with a combination of in-person and virtual events on March 6 and 7.

The festival was started by Don Hansen in 1971 after Hansen bought and moved his sportfishing and whale watching business to the Dana Point Wharf. That legacy remains in the family, Hansen’s daughter Donna Kalez is co-president of Dana Wharf Sportfishing and Whale Watching and is one of the organizers for the festival.

The festival celebrates the annual migration of gray whales as they pass through Dana Point. It is believed the whales use the Dana Point headlands as a landmark on their migration.

The event is marked with whale and dolphin watching trips out of Dana Point Harbor and a series of other educational events throughout the weekend to engage the community and teach about the local marine fauna.

The usual two-weekend event was cut short last year because of COVID restrictions but that didn’t stop organizers from finding a way to host the event this year.

“Here we are a year later and we get to have the 50th annual Festival of Whales so we get to continue the legacy,” said Kalez.

Kalez and Gisele Anderson, co-president of Dave’s Dolphin and Whale Safari, marked the 49th anniversary by facilitating Dana Point being named the Dolphin and Whale watching capital of the world and will mark the 50th with a designation as the third Whale Heritage Site in the world and the first in North America by the World Cetacean Alliance.

COVID restrictions have limited this year’s activities, the parade, street fair, and concert have been canceled.

But participants can still come down and get their Festival of Whales commemorative tee-shirt with a groovy logo by Lynlea Micheals showcasing a 1970s flair to match the festival’s origin, walk around the harbor for the Harbor Music Series and the Dana Point Fine Arts Association art show, and sign up for whale watching tours throughout the weekend.

There will also be live virtual events that people can enjoy, like the Splash Dash Virtual 5 K and Kid’s 1-mile fun run, and a virtual walking tour through the historic town center.

To learn more and see a full schedule of events visit https://festivalofwhales.com/.