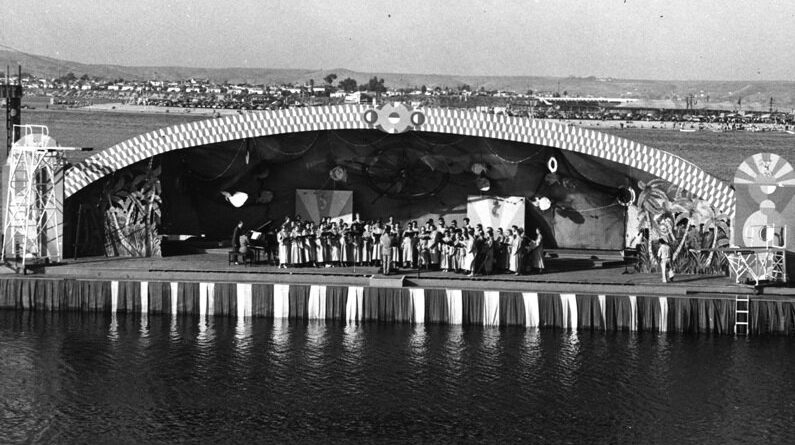 SAN DIEGO–This photo was taken in September 1949 during the Fiesta Bahia or Festival of the Bay. The three-day celebration was held Sept. 3-5, 1949 to celebrate the official opening of Mission Bay Park. The celebration included events on floating stages – including the floating stage pictured, a Central Labor Council water parade, showing of the movie ‘Man’s Conquest of the Air’ each night, vaudeville shows, and aquatic exhibitions by the San Diego Swimming Association including water ballet, high- and comedy-divers, and water ski, boat and paddleboard races.

According to Sandiego.gov, in 1944, a Chamber of Commerce committee recommended development of Mission Bay into a tourist and recreational center to help diversify the city’s economy, which was largely military. In the late 1940s, dredging and filling operations began converting a tidal marsh into what is today Mission Bay Park. Approximately one half of the 4,235-acre park was once state tidelands. According to Sandiego.gov, it is the largest aquatic park of its kind in the country and is roughly equal parts land and water.

City of San Diego, Office of the City Clerk photo