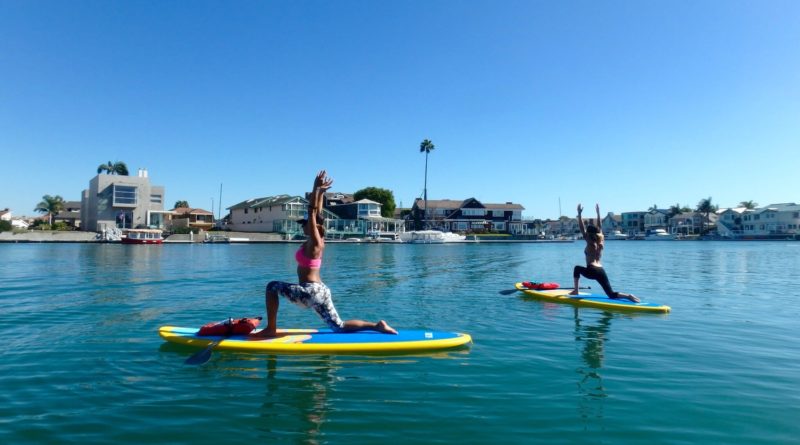 SUP yoga businesses are spreading in all types of waterways.

SOUTHERN CALIFORNIA ― Standup paddleboarding and yoga have emerged as trending recreational activities, going so far as to merge into a fused fitness activity on the water. Standup paddleboard yoga – or SUP yoga –classes have been popping up in waterways throughout Southern California.

Are recreational harbors and lagoons already too congested for this growing fitness trend? Are SUP yoga instructors able to balance the needs of their students with other activities and watercrafts in the water?

The Log reached out to a number of instructors teaching SUP yoga, including Roxy athlete and Paddle into Fitness owner Gillian Gibree. Harmony appears to be present in the harbors with one exception.

Paddle into Fitness officially started in San Diego in 2010 offering SUP yoga classes and certifications. Gibree is the owner of the company and has graced the covers of many fitness magazines as a sports model and ocean athlete. Her current business focus is SUP yoga certification.

“So part of our training that we do is teaching them how to operate in a marina, what the buoys mean and how to make rescues,” Gibree continued. “We go over lifeguard training, first aid and CPR.”

The master training program covers boating safety, rules and laws; everyone enrolled in the program is required to take a test.

Gibree said issues arise when rental companies fail to enforce lessons or rules to people renting paddleboards and from people not wanting to pay for a lesson.

“Hopefully by having more master trainers…people will be safer on the water by wearing a [personal flotation device] and leash,” Gibree stated.

Gibree’s business also offers Float into Fitness certification. Inflatable mats with bungees are used instead of a board and paddle.

The inflatable fitness mats give people a platform to do fitness and yoga in a pool, which allows for a more controlled environment without boats and other watercrafts.

“For the most part, people are running [SUP yoga] classes in the morning” when there is not much boat traffic and lakes where boats are not allowed, Gibree pointed out.

Melanie Clow was introduced to SUP yoga at a Wanderlust Festival, a summer yoga festival in Squaw Valley. Her trainer was, in fact, Gibree from Paddle into Fitness. Clow started Tides Up Yoga over two years ago in the Channel Islands Harbor.

Clow said she makes sure her students know how to swim and have a life vest. The paddleboards also have leashes and anchors.

“There are some great spots in the harbor out of the way [of boaters],” Clow stated.

“I provide a safety demo at the beginning of class in addition to ensuring students have access to life jackets and making sure students can swim,” White stated. “This safety demo includes water safety and harbor safety rules.”

White said she has only had one complaint from a boater in the past two years.

“The only situation I had one time was when we were anchored by the damn by the main channel in Channel Islands Harbor,” White said.

White said one boater, pulling out of a dock, yelled at them to move even though they were not directly in the path of the boater.

“I just changed the place where I anchored at, because we want to avoid being in the boaters’ ways or creating any tension between people that live there,” said White.

White said people are generally supportive about getting out on the water and exercising.

“We have a particularly understanding harbor,” White stated. “Here the Harbor Patrol stops and says, ‘that is so inspiring.’”

Tiefenthaler has a mobile setup at Mother’s Beach in Marina del Rey where she offers group classes every weekend. She can accommodate 10 to 15 students per class as she has a fleet of 17 boards, paddles and anchors. 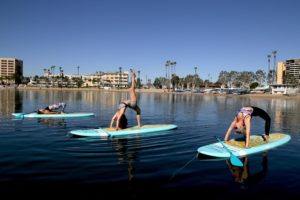 “We stay out of everyone’s way, and I train all of my instructors to know water rescue, water safety and harbor safety,” Tiefenthaler stated. “We’re very cautious, and safety is number one for us.”

Tiefenthaler admitted she received complaints from boaters in her first year before people understood her business.

Tiefenthaler said business has run smoothly ever since, thanks to her business’s longevity and everyone’s observation of the harbor rules and safety protocol. She also said her classes are conducted out of the swim area but in an area where boats are not allowed.

“We paddle out where the boats go – just for the warm up [which takes about 15 minutes], but we follow safety regulations and stay far to the right,” Tiefenthaler explained. “We yield for boats. We come right back on the right side, and then we anchor our boards within the buoys avoiding any boat traffic.”

Tiefenthaler says she has no direct competitors in the marina, since Marina del Rey limits the amount of people that can get on the water at once.

She applies for permits through Los Angeles County Department of Beaches and Harbor and gets renewed each year.

“I’ve been granted a three year permit, so I have the county approval,” Tiefenthaler said.

Marci Kawar is the co-owner of Floating Yogis, which started in 2012 in San Diego county.

The SUP yoga classes are taught in a Carlsbad lagoon. They have a studio with parking and bathrooms beside the lagoon.

Kawar admits to the challenges of teaching SUP yoga in an uncontrolled environment with changing water conditions, windy days, boats that may come by, and students at different skill levels.

“We have anchors [on the paddleboards]. We anchor down, so we are staying in one place. We’re secure. It allows us to take out all levels of people,” Kawar mentioned.

Class sizes can range from six to as many as 15 students, according to Kawar.

Kawar said she has not heard of any boaters complaining about her class being in the way.

“Actually it’s the other way around. Paddleboarders complain about the boats,” said Kawar. “They don’t love the boats. The boats get awfully close to the buoy lines, so there is often a lot of wake.”

Santa Barbara Harbor is the one exception referred to at the outset of this report.

SUP yoga instructors have attempted to conduct classes in Santa Barbara Harbor only to be shut down.

“Santa Barbara is the only place I’ve heard of where they don’t allow that, which is a bummer because it is such a beautiful place to do SUP yoga,” Gibree stated. “I guess I can understand, because boaters don’t want people anchored in the marina.”

Riedman said the water in that area tends to get choppy, and SUP yogis want calm water.

“It’s just our harbor is so tight,” Riedman stated. “We get complaints from boaters all the time about SUPs in general.”

Riedman also mentioned one of their tenants, an SUP rental company, complained about people doing SUP yoga out on the water.

4 thoughts on “Finding a balance between boaters and SUP yogis”