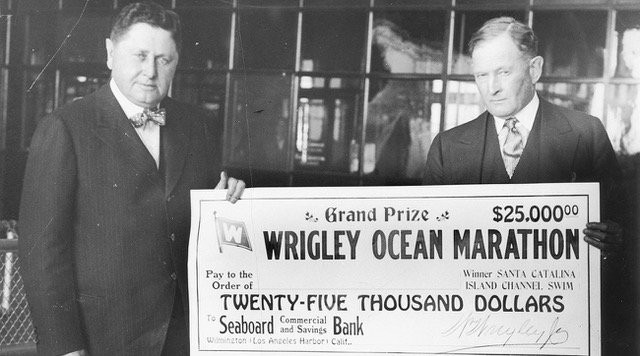 AVALON—Spurred by the craze for long-distance swimming in the early 20th century, William Wrigley Jr., owner of Catalina Island at the time, sponsored a swim across the Catalina Channel in the winter of 1927. The event was held to keep Catalina Island in the public eye and to promote visitation. Dubbed the Wrigley Ocean Marathon, the race was 22 miles from Two Harbors – then known as the Isthmus – to Point Vicente, off Palos Verdes Peninsula. There was a prize of $25,000 for the winner.

On Jan. 15, 1927, more than 100 swimmers took off for the swim. However, almost all swimmers gave up at various points during the race and as darkness approached at the end of the day, only 12 swimmers remained. Only two remaining competitors were still in the water when a winner crossed the finish line.

The race was ultimately won by 17-year-old George Young, who spent 15 hours, 44 minutes, and 30 seconds on his journey. Although the swim generated lots of publicity for the island and attracted thousands of spectators, with safety concerns in mind, Wrigley decided not to tempt fate again, making the swim the first and final Wrigley Ocean Marathon.