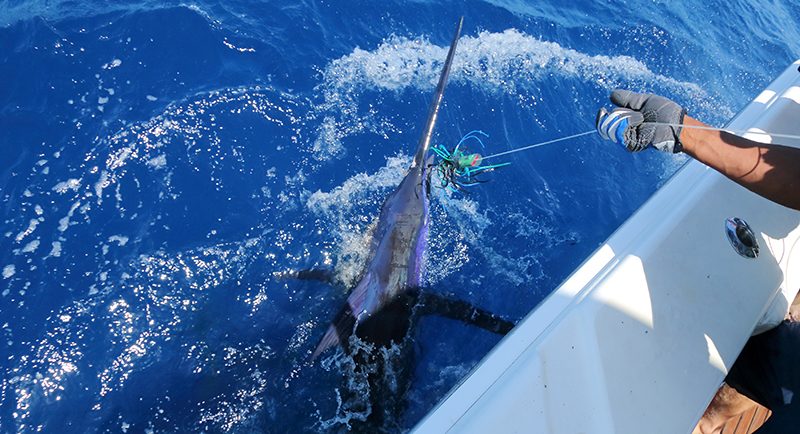 Big game fisherman has a marlin hooked on the hook to pull the fish aboard. Image by Shutterstock.

There is a technique used in the fishing community called “bouncing the fish.” The objective is to fling the fish out of the water and up onto the boat. However, this technique has a time and place, and the negative connotations attached to it should be considered before executing the method.

Ryan Troli of Harbor Fishing Co. in San Clemente is a commercial angler who prides his work on sustainable harvesting practices that allow him to sell directly to restaurants. In 2016, Troli met Blake Mellgren, owner, and proprietor of Craft House, a local restaurant in Dana Point. Mellgren was Troli’s first sale and thus began Harbor Fish Co.

“The time to bounce a fish, I would say- any fish that is light enough that you can actually lift it with the rod,” said Troli. “The largest you would go [when bouncing a fish] would be 20 pounds. Realistically anything past 20 pounds will break your rod.”

It’s important to remember that although the fish may be killed in the end, or even if it is released, it is ethically and morally important to treat the fish with respect. Imagine dropping a peach on the ground; that peach will bruise. Likewise, when a large fish is flung from the water and slammed down onto a boat deck, it will injure and discolor the fish, cause bleeding, and be inhumane.

If a whole fish is knocked against a hard surface soon after capture, bruising of the flesh can occur in the form of dark-colored patches in the fillet. In addition, the rupture of fine blood vessels causes discoloration in the flesh with consequent release of blood which does not drain away during gutting and icing, according to www.foa.org.

Harbor Fish Co does not practice the old-school method of bouncing. It is crucial when selling fish directly to restaurants to ensure fresh, good-quality fish. Bounce-induced bruising and bleeding make for poor-quality meat. An additional benefit to not bouncing your fish is that the risk of breaking the rod is not present. A gaff, net, or even grabbing the fish by the tail are more admirable ways to hoist the fish on board.

The technique can be used on smaller fish, but always remember the respect that the fish is owed during its capture.