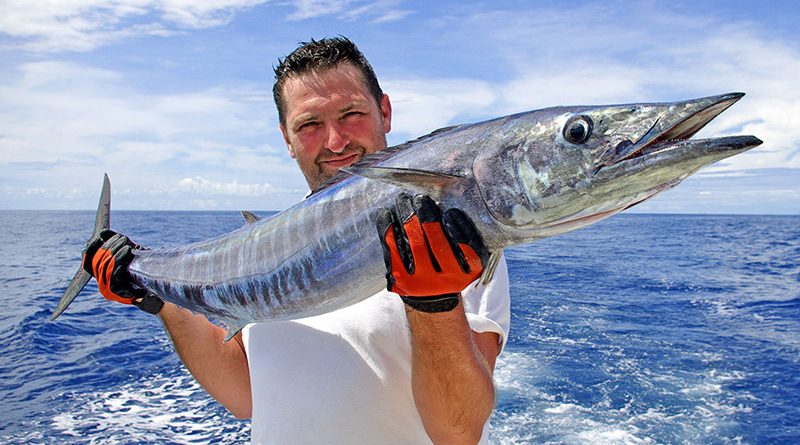 Always remember to respect the fish you just caught to minimize any unethical handling or care for the fish that just lost its battle. Shutterstock image.

Congrats on catching a giant fish, but that doesn’t mean your fish-handling techniques should be compromised. Here are nine recommendations to help you respectfully handle your big fish.

When lifting a fish, gently raise it horizontally with two hands. The goal is to give support along the entire length of the fish to relieve any excessive pressure being applied to different parts of the fish. Even if it’s a species often held by the mouth, like striped bass, it’s important not to hold a big fish just by the mouth. A fish is too heavy to be held up by the mouth when it reaches a large size. The weight of its own body can actually rip and tear at its jaw.

Depending on their size, certain species cannot be taken out of the water. For example, in the United States, tarpon larger than 40 inches cannot be taken out of the water. Once they’ve reached this size, their bodies have so much mass that they need to be kept in the water to support that weight. While this rule may not apply in other countries where tarpon and other species exist, the physics and the ethics behind proper handling still apply.

This should apply to every fish you catch, no matter the size. Of course, some fish species are more delicate than others, but wetting your hands before handling them is always a good and considerate action.

Many anglers reach for the gills to grab ahold of larger fish. Even though the gills provide a handhold for lifting larger fish, it is one of the deadliest places to hold a fish. If you are practicing catch and release, positioning your hands and fingers in the gills is one of the most harmful things you can do and will increase the likelihood of killing the fish.

This may seem like common sense, but believe it or not, some anglers will resort to holding a fish by its eyes. It should be self-explanatory that this is not a proper way to hold a fish.

Larger fish will put up tougher fights, but it’s the angler’s responsibility to limit the fight time as much as possible. Since the survival rate of the fish drops as fight time grows, anglers should attempt to get the fish to hand as quickly as possible without breaking the line. If you are practicing catch and release, you should use gear that helps to minimize the fight time.

Depending on the fishery, there are several ways that anglers will catch big fish. This can be performed by hand, with a net, or with a gaff. If it is a catch-and-release circumstance, the angler won’t be landing the fish with a gaff. When using a net, make sure the net is made of rubber rather than nylon. Rubber netting is less harmful to fish.

Never lay a fish on dry ground—it’s disrespectful to the fish. Anglers should minimize handling time outside the water and keep the fish wet at all times. One way to help keep the fish wet is to use a rubber net. It provides a safe place for the fish to stay in the water while the angler unhooks the fish, prepares fish tagging materials, or does other tasks before releasing the fish.

When releasing large fish back into the water, it is important to revive them before releasing them. That fish just had to endure the stress of the fight, then had to be put through the stress of you unhooking it, then perhaps a photo session out of the water. All these stressful conditions collect and can lead to the fish dying after being released. Rather than just flinging the fish back into the water, take the time to carefully set it in the water and revive it before allowing it to swim away. When you revive a fish, make sure you hold it upright and in a gentle flow of water so it can get its gills working and recover oxygen from the water. In still water, hold the fish gently and watch it pump water through its gills, providing much-needed oxygen to the fish.