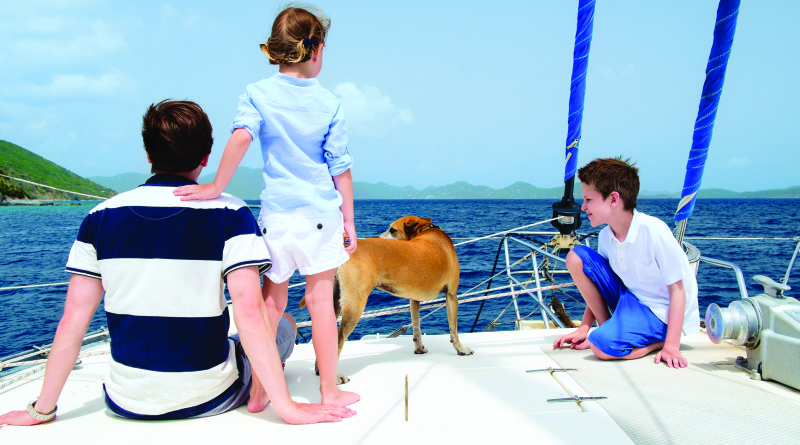 STATEWIDE — A beautiful morning inspires you to head to your marina, board your boat, and sail out into the Pacific Ocean for a short fishing trip, visit to another marina or multi-day trip to Catalina Island. But, before you head out on a sail, should you file a float plan?

Why have a float plan?

He added a float plan often comes in handy when a vessel goes missing and harbor patrol or Coast Guard needs to do a search-and-rescue.

A BoatUS blog states float plans help provide peace of mind and arms first responders with clues of where your vessel might be if something goes wrong.

“A float plan lets your family and friends know your whereabouts and, should a trip come to grief, the plan will give the searchers a valuable head start locating your boat,” the BoatUS blog stated.

Arv Larson, a liveaboard at Sunroad Marina in San Diego, said communication with a responsible party on land is an important element of a float plan.

“A float plan is a plan we give to a third party who should be tracking that you check in with them,” Larson said. “If you don’t check in with anybody, nobody knows where you actually are. What you do with a float plan is you give it to a responsible person who would be the point of contact, someone you could call and say, ‘hey, my plans have changed.’”

Float plans, Larson explained, serve as a backup measure for whenever a boater is lost or loses communication.

A story in The Log described one instance when a float plan proved lifesaving in the most interesting of ways.

Santa Barbara resident Scott Burns was on his boat just off Santa Cruz Island in May 2015 when he was picked up by Harbor Patrol and brought back to the mainland. Burns, once ashore, was taken to Cedars-Sinai Medical Center in Beverly Hills, where he would receive the new pair of kidneys he had sought since 2012. No one was able to communicate with Burns when the kidneys became available after a three-year wait. However he did leave a float plan with his wife, detailing his schedule and location.

Float plan forms are readily available online via Coast Guard Auxiliary or California’s Division of Boating and Waterways (Cal Boating). The federal float plan is three pages long and includes a guide to instruct the landside holder of the plan of how to respond should a boater not return to port as stated in the paperwork. California’s form is significantly shorter.

The Coast Guard Auxiliary defines float plans as “a written statement (as by a skipper) of the details of an intended voyage (as of a boat or watercraft) usually filed with a relative, neighbor or other person on shore” or “a document that specifically describes the vessel, equipment, crew and itinerary of a planned voyage.”

Boaters can download a float plan form from the Coast Guard Auxiliary’s website (floatplancentral.cgaux.org). The form asks boaters to fill out key information about vessel identification and propulsion, communication and navigation equipment, distress signals, gear, and information about the vessel operator and passengers aboard.

Coast Guard Auxiliary officials instruct boaters to file the float plan with a “holder.” The holder is a trusted person who, according to the Coast Guard Auxiliary, “is willing to hold you to your plan and follow-up, if necessary, if you fail to return home.”

The Coast Guard Auxiliary recommends the boater and holder to periodically check in with each other as prescribed in the float plan, if anything changes while at sea, and when the journey is completed. Vessel operators are also instructed to share the “Boater Emergency Guide” with the holder to outline what to do if the boat does not return home and begin the search and rescue process if the vessel does not return as planned.

Cal Boating also offers a float plan form (dbw.ca.gov/PDF/FloatPlanForm.pdf). At the top of the form is a checklist where the boat operator must verify whether the vessel is in good condition, properly loaded, and has an ample fuel supply. Boaters can verify whether they have several items onboard, such as tools, life jackets, throw-able devices, fire extinguishers, visual distress signals, oars/paddles, good anchoring equipment, bailing device, VHF radio, flashlight, a first aid kit and an extra starting battery.

Below the checklist is an area where the boat operator provides greater details of the float plan, such as who is operating the boat and where he or she lives and can be contacted. The vessel operator is also asked to include the contact information of someone on land, specific details about the boat, how many people are aboard, radio frequency, and the planned journey.

Cal Boating’s form informs boaters to cancel a submitted float plan upon returning to the home marina or harbor.
Boaters are suggested to fill out each form before each trip.

BoatUS also provides a float plan at boatus.com/seaworthy/FloatPlan.pdf. The national boating organization urges vessel operators to complete a float plan for each trip out of port and have the plan shared “with a responsible relative or friend.”

The BoatUS form is one-page long and requires the vessel operator to fill in as much information as possible about the boat, contact, and journey.

“Get in the habit of filing a float plan,” the language at the end of the BoatUS form states. “It can assure quicker rescue in the event of a breakdown, standing or weather delay. Make enough copies to last for the season.”

Where to file your float plan

Agencies and boating groups regularly advise boaters to file any and all float plans with a trusted contact on land, such as a significant other, family member or friend. Boaters can also leave a float plan with the harbormaster at their respective marina.

Only reach out to the Coast Guard in the event the vessel does not make a safe return as detailed in the float plan.

Evans said a responsible friend or family members should be aware of any water outings.

“For shorter daytime outings on the water, at a minimum a boater should contact a responsible person before you go out and tell him or her where you will be boating and when you plan to return,” Evans said. “Give your contact the phone number for local authorities in case you fail to return when expected. Contact this person again when you return or if you decide to extend your time out on the water.”

“For extended outings on the water, leave a float plan with a relative or friend, or at least a local marina,” Evans said. “If any major part of your float plan changes, for example you change routes or stop along the way, you should contact your representatives ashore and update the float plan.”

Consequences of not closing a float plan

Evans said failing to cancel a float plan “could result in a costly and unnecessary search.” He was unsure whether a boater would face fines or other penalties for a search-and-rescue attempt despite arriving safely at port.

Filing a float plan is not a formal requirement. A float plan is only as valuable as the person with whose stead it is trusted, Larson pointed out.

“The recipient of the float plan should follow up and do something if you don’t follow the schedule you laid out,” Larson said. “You need a responsible person to give [the float plan] to, and sometimes that’s hard to do.”

Larson said he often leaves a float plan with his harbormaster.

One boater, Bryan Hull,  told The Log he has never filed a formal float plan but has kept someone on land in the loop whenever he takes the high seas for a prolonged trip.

“I have never put together a formal float plan. I am almost exclusively a day sailor and don’t venture out that far, so I haven’t felt the need to do one,” said Hull. “On the few occasions that I have taken a longer sail, e.g. to Catalina, I inform at least one of my friends where I am going and when I anticipate returning, and tell them to ‘call the Coast Guard’ if they don’t hear from me by a certain time!”