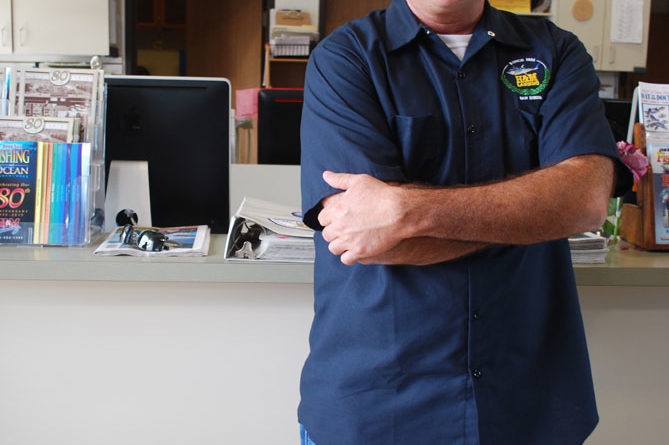 SAN DIEGO — Imagine being on your lunch hour and daydreaming of not returning to the office, instead quitting it all to start your own job doing the one thing you always wanted to do for the rest of your life. Two men operating water taxis in San Diego Bay during the summer of 1934 did just that, daydreaming of a lifetime on the water and fishing for big game.

The daydream occurred when they decided to take the day off work to go fishing for marlin. Though they did return to work, the marlin fishing trip planted a collective seed in their heads to launch a sportfishing company.

The daydream soon became a reality. When 1934 became a memory and the clock began ticking on 1935, four men founded H&M Landing. Its first vessel, Mascot II, took its maiden voyage April 6, 1935. By 1969, H&M Landing boasted itself as the world’s largest sportfishing fleet — a title the company continues to advertise to this day.

It has been 80 years since H&M Landing launched its maiden voyage. A man who spent 31 of those 80 years at the helm of H&M Landing announced he would end his tenure as H&M Landing’s managing partner. Phil Lobred will pass the torch to Frank Ursitti.

Lobred took the reins of H&M Landing in 1984, just one year ahead of its 50th anniversary. Under his leadership, H&M Landing launched its own website in 1997, began offering online bookings in 2000 and took residence in its newest building.

H&M Landing played a role in the development of fair practices in the sportfishing industry, contributed fleets to fight in World War II, launched an 85-foot long-range vessel in 1965, expanded its operation to Santa Barbara in 1969 and helped launch the San Diego Sportfishing Council in 1979.

Ursitti acknowledged H&M Landing accomplished quite a bit in its 80 years of existence, with Lobred overseeing the sportfishing company’s growth during his 31-year tenure.

“H&M Landing has always been considered a leader in the sportfishing industry,” Ursitti said. “Due to Phil’s vision to progress, we are poised at the forefront with technology to better serve our customers. Phil has done an incredible job in building what was once a fleet of two boats to where we are today with 27. He has triumphed in the face of adversity and held fast when required.”

In January, Ursitti said he was approached by Lobred to discuss a transition. Lobred would retire and Ursitti would take over as H&M Landing’s managing partner.

“It was I who came to Phil some years ago asking about the glamorous position he held at the landing, seemingly managing with ease and grace. I would always joke that someday I’d love to have his job, sipping coffee with my feet up on the desk,” Ursitti recalled.

He was next in line for the job he considered “glamorous,” but Ursitti’s path to the top leadership position at H&M Landing had humble beginnings. Living in Oxnard in 1976, Ursitti started his career in sportfishing working on boats as a student.

“I started my career in sportfishing like so many others, fishing weekends and scrubbing boats in the afternoons when school let out,” Ursitti said. “Channel Islands Sportfishing was the largest landing north of San Diego. I began work full time upon graduation [from high school] and also while attending the local community college.”

He added that he began operating boats for the landing as soon as he earned his license in 1981.

Nine years later, Ursitti purchased Coral Sea, a 60-foot, 660-horsepower charter boat. He spent the next 25 years operating Coral Sea, alternating between San Diego each summer and northern Channel Islands during the winter and spring fishing seasons. Before the turn of the century, Ursitti partnered with Horizon Charters to launch Channel Islands Marine Floating Lab, a marine science education program for schools. He also purchased the first boat he ever worked on, a Ranger 85.

More than a decade later, Ursitti heads south to San Diego, taking the baton from Lobred and optimistic of H&M Landing’s immediate future.

“What lies ahead for H&M? Success. We are in a warm water cycle, and that is beneficial for our fleet of vessels that thrive off pelagic fisheries,” Ursitti said, hoping to sustain the company’s growth realized during Lobred’s tenure. “We have great relations with our neighbors to the south as well as those in our community. Last season was record setting, and this one looks to be on par or better.”