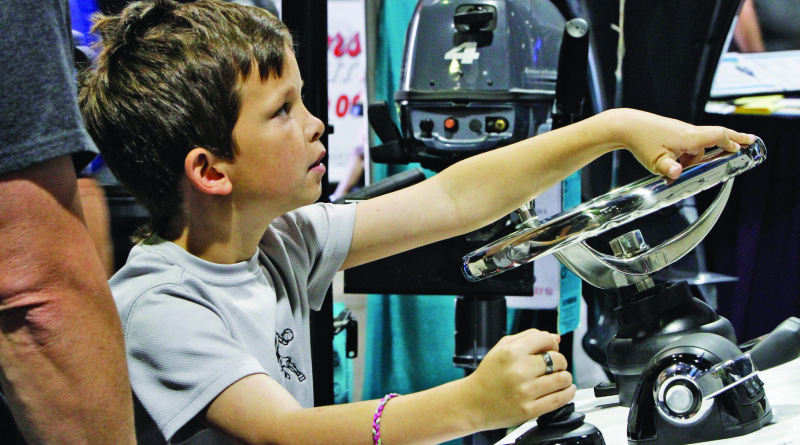 DEL MAR — The annual Fred Hall Show returns to the San Diego area for a 41st year as the largest boating and outdoors event runs for four days at the Del Mar Fairgrounds.

Anglers, boaters, hunters and outdoors enthusiasts hope to the see the latest recreational boat models, fishing gear and tackle, and other outdoors accessories while also attending seminars and taking in family-friendly activities.

Doors open March 23 with the show running through March 26. San Diego’s largest boating, fishing and outdoors show will feature more than 500 vendor booths, 200-some seminars and acres of boats on display.

The Del Mar show marks the third of three Fred Hall Show productions this year; the other two were in Long Beach (March 1-5) and Bakersfield (March 10-12).

Be sure to visit The Log/FishRap booth, where you can sign up for a free digital subscription and e-newsletter to be automatically entered to win the grand prize — a Malibu Sierra 10 kayak.

The drawing for the grand prize will be on March 27 and the winner will be announced in the April 7 issue of The Log Newspaper. Winners do not have to be present to claim prizes.

The Ultimate Air Dogs show, presented by Ram Trucks, will also be on display at the Del Mar show.

Mammoth Lakes will sponsor the Kids Fish Free Trout Pond. Attendees will also be able to have their picture taken with a giant trout display at the Mammoth Lakes Seminar Theater.

Dove Island Lodge, a fishing themed resort in Alaska, will also be on hand at the Del Mar show.

Kids will also be able to interact with near-shore marine species, such as starfish and sea slugs, at the “Touch Tanks” (a large saltwater tank). Touch Tanks is sponsored by Accurate Fishing Tackle and features hourly seminars.

A few vehicle manufacturers (Dodge, GMC, Ford) will have new cars and trucks on display, as well.

Instructional seminars will offer attendees information on fishing local lakes (which are experiencing rising water levels due to the recent rains), catching freshwater and saltwater fish from a kayak and one-on-one tutorials on fishing techniques.

Buy tickets in advance at fredhall.com/san-diego or in person at the door. For more information visit fredhall.com.

Anyone who donates $50 to the Coastal Conservation Association of California will get into the Del Mar show for free.

The Del Mar Fairgrounds is located at 2260 Jimmy Durante Boulevard in Del Mar.