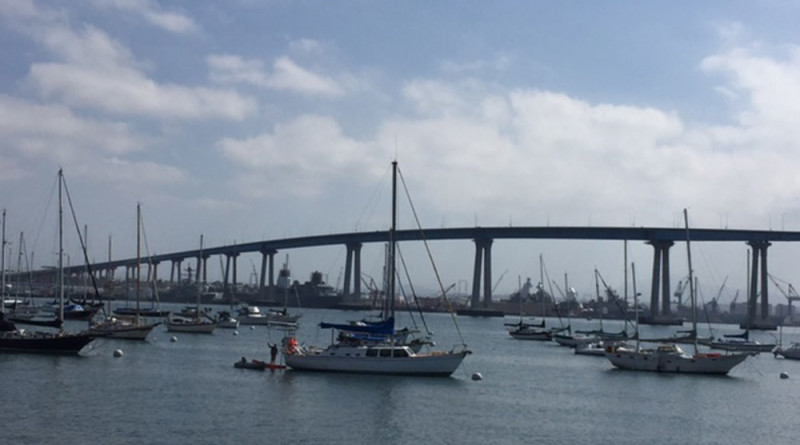 Glorietta Bay in Coronado is one of the largest areas for anchorages in San Diego Bay. There are also anchorages at La Playa Cove and near Harbor Island. Boaters often visit anchorages while en route to destinations north or south of San Diego.
Parimal M. Rohit photo

SOUTHERN CALIFORNIA — What does a public anchorage have in common with the Wild West? Nothing, at first blush, as anchorages are in the water and populated by recreational boats and yachts while the Wild West is generally associated with small desert towns where cowboys engage in duels. Public anchorages, however, mimics the Old West lifestyle when it comes to freedom of movement and the romanticism of roaming from place to place.

Public anchorages give boaters the ability to visit local harbors while roaming the high seas. Perhaps a boater is cruising from Seattle to San Diego and wants to make port in Santa Barbara for a few days. Conversely a family in Redondo Beach hops on their boat in King Harbor one morning and decides to spend some time in Dana Point. Free anchorages at these destinations and others allow boaters to make port at a harbor for a brief stop before moving on to other adventures.

Where can you find an anchorage?

A pair of 72-hour anchorages and a Cruisers Anchorage is available at the Port of San Diego. Use of the anchorages are free but visiting boaters must obtain a permit at least 24 hours in advance and up to one year ahead of the planned visit.

Reservations for the anchorages at La Playa Cove and Glorietta Bay are accepted online at reservations.portofsandiego.org/boating.

Visiting boaters must obtain a permit for the Cruisers Anchorage, which is located at the eastern tip of Harbor Island and adjacent to the U.S. Coast Guard Air Station, in person at 1401 Shelter Island Drive.

Specific rules and regulations of each anchorage can be found at bit.ly/1RGiVKT.

The harbor’s East and West basins both have a public anchorage available for visiting boaters.

One anchorage, located by the fuel dock, is charted and sparingly used. The other anchorage is located near the Ocean Institute and uncharted but frequently used. Both are free of charge.

Some anchorage users are locals while others are transients visiting Dana Point Harbor en route to San Diego. Transients often stop at the anchorage to load up on provisions before continuing south.

A full-time public anchorage exists just east of Lido Isle. Newport Beach has already experimented with a second anchorage on the western side of Lido Isle and is contemplating bringing it back for another test run this summer.

“I think it’s essential to the harbor. People seem to enjoy it,” said Newport Beach Harbor Commissioner Joe Stapleton, adding the planned Lido Marina Village and Central Avenue Dock will be a great asset for anchorage users. “The east end of Lido is getting tremendous amount of use.”

Fellow commissioner Brad Avery echoed similar sentiments, likening anchorage use to camping but on the water.

“The appeal is you can show up without a reservation and anchor at no cost,” Avery said. “It’s a neat concept. It started off as a place for people to take shelter.”

Avery said the anchorage in Newport Beach is used regularly by a gamut of boaters.

“The existing anchorage almost always has a few boats in it, and in the summers it is packed on weekends,” he said in an email. “There is no demographic, you have the full range of locals and visitors, small and large boats, power and sail. Often there are groups from yacht clubs that raft up together.”

Being detached from land is an anchorage’s greatest appeal, Avery said.

“For many boaters, being anchored is to be free from the land, from fees, and have open water all around you,” he said. “It’s a totally different experience, of being disconnected, even in Newport Beach!”

“Boats must stay 300 feet east of the Wharf,” said Santa Barbara Harbor Operations Manager Mick Kronman. “Beginning November 1, they must move farther east, to about a mile from the Wharf, to protect it from southeasterly winter storms — they can actually anchor there anytime (we call it the ‘year-round’ anchorage), but during the summer, most prefer to be closer to the harbor.

“Anchoring out is free,” Kronman continued.

Anchorage users in Santa Barbara sometimes have to relocate to inside the harbor due to small craft advisories or poor weather conditions, according to Kronman. The relocation is not free, however.

“When Small Craft Warnings (or worse) are posted, we allow anchor-outs into the harbor, because we’re a legislatively designated Harbor of Safe Refuge,” Kronman said. “When they’re in the harbor, however, they need to pay transient slip fees like any other visitor.”

The U.S. Coast Guard retired an anchorage in Marina del Rey last year. The closure means Marina del Rey no longer has a public anchorage within the harbor. One boater said he is unsure whether a new place for boats to park on the open water will return in the near future. The anchorage was at the north end of the main channel in Marina del Rey, according to boater Jon Nahhas.

“There is no anchorage inside Marina del Rey Harbor and the outside anchorage, 1,000 feet from the south entrance to the jetty, doesn’t provide ‘Safe Harbor,’” Nahhas said. “We’ve contacted the Coast Guard, NOAA, and the Coastal Commission about what we consider to be an unlawful county code moving boaters into harm’s way without shelter. The county’s response to our concerns is that visiting boaters can rent the guest slips at Burton Chace Park (I think they are at $1.50 a foot now) and that if the Coast Guard issues a small craft warning (high winds) they will aide boaters in getting from the illegal outside anchorage to the slips they are renting at Burton Chace Park.”

Anchorages are a resource & a liability

Carter Ford, a boater who lives in Newport Beach, said anchorages are an important resource for boaters.

“Anchorages are one of the resources that harbors offer. They provide safe haven from the at times stormy ocean; very important for mariners’ safety,” Ford told The Log in an email. “They are more economical than marinas, which makes boating, especially long-term, more affordable.”

“Boats staying in [anchorages] are more spread out than in marinas, and have appeal for aesthetic and environmental reasons, to locals as well as visitors,” Ford said. “I’ve chosen to spend some nights in both Newport anchorages just for the joy of overnight escapes.”

However, anchorages, depending upon whom you ask, could be a liability.

A handful of Newport Beach residents who have waterfront homes near a proposed public anchorage have complained of such infrastructure limiting their views of the harbor.

In 2008 the Port of San Diego shut down A-8 Anchorage near National City, which was free and open to boaters for long-term use. The unlimited, free anchorage was reportedly home to several derelict vessels and too costly to maintain. Harbor Patrol reportedly complained of a steady dose of criminal activities occurring in the area.

Ford said shifting to different anchorages to avoid slip fees is not practical.

“Boaters aren’t ‘abusing the system’ to avoid paying slip fees by moving around. Slips are often unavailable as well as costly. There’s significant time and effort involved in relocating a boat from one anchorage to another (often to a distant harbor),” Ford said.

Waterfront residents and anchorage-using boaters can co-exist, according to Ford, so long as the proper education and enforcement measures are in place.

“Anchorages are not of themselves a nuisance,” Ford said. “If shore side residents are offended by looking at boats in the harbor they should have bought on a golf course. These are public waters.

“Yes, harbor users of all types need to be good neighbors, including not being noisy,” Ford continued. “The bay-boat late night cruisers are far and away the worst offenders, they are having a good time and either forget or maybe don’t care that noise carries dramatically across the water.”

Newport Beach is contemplating a second public anchorage west of Lido Island. The anchorage could become a permanent fixture if enough boaters use the venue.

Ultimately anchorage use comes down to informing boaters where such boat parking lots exist, placing them nearby local (and accessible) amenities, and keeping regulations reasonable.

“The way local officials can make them used more is by publicizing them, and providing amenities such as shore access,” Ford said. “Also allowing limited side tie-ups, up to three boats say, can be appealing. This uses space much better and should be allowed. (This is now considered technically a raft-up, which is too restrictive.)”

5 thoughts on “From harbor to shining harbor: The freedom of anchorages”