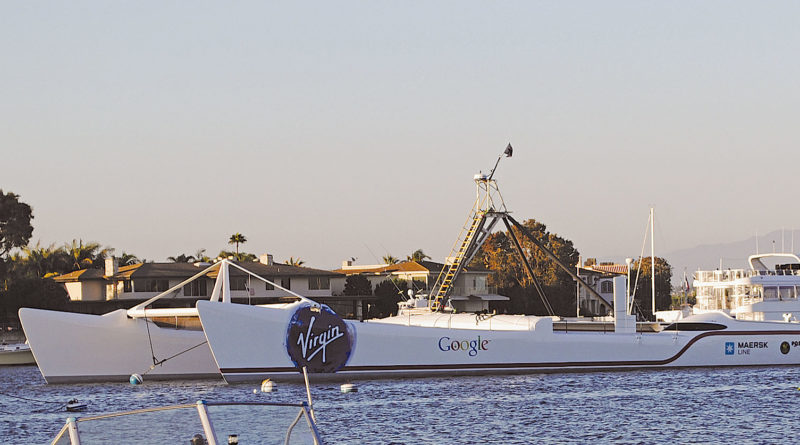 NEWPORT BEACH — Aside from test runs and an occasional whale tow, Newport Beach resident Chris Welsh’s 125-foot world-famous catamaran Cheyenne has been quietly waiting on its mooring in Newport Harbor for its next big adventure.

The large one-time around-the-world record-holding sailing yacht has a course set for a new mission: It is set to be used as a dive platform for a high-tech deep-sea submersible designed to explore the ocean’s depths, including the deepest point: the Mariana Trench.

In a partnership with Welsh and billionaire adventurer Richard Branson, the Virgin Oceanic mission was launched with much fanfare in March 2011, with the dives scheduled to begin in August 2011.

However, after more than a year since the boat’s arrival, the submarine has yet to hit the water, and some harbor officials have grown weary of Cheyenne’s unpaid presence in the harbor.

“I’ve received complaints that the boat has overstayed its welcome,” said Newport Beach Harbor Commission chairman Ralph Rodheim. “The boat is not paying a fee — but others are, saying, “I have a 40-foot boat, I’ve got to pay; why doesn’t he?’”

Since the yacht came to Newport Harbor from San Francisco Bay in February of last year, the city has allowed Welsh to moor it in the harbor without paying for a mooring permit.

Welsh requested a 90-day permit that was extended to Oct. 31, 2011. The boat was originally moored at the harbor’s turning basin, to remain highly visible and bring attention to both the deep-sea expedition and to Newport Harbor.

“It’s the longest vessel we have on a mooring, but it’s been a good source of education,” said Newport Harbor Resources manager Chris Miller at the April 11 Harbor Commission meeting. “We thought it was going to benefit the community with positive publicity, education and so forth.”

Cheyenne stayed in the turning basin until the barges and dredge scows used in last year’s Rhine Channel dredging project needed the area to store their vessels. At that time, the catamaran was moved into Mooring Field “F” across from Newport Harbor Yacht Club moorings along Balboa Peninsula.

Since then, the boat has remained in the harbor, as delays to the Virgin Oceanic mission have kept the vessel from heading out on the deep-sea dives. That has left the Harbor Commission in a predicament, pondering whether to start charging a boat that was scheduled to be out of the harbor more than six months ago for an annual mooring permit.

“The way we’ve gone about this subjects us all to criticism,” said Harbor Commissioner Duncan McIntosh. “We basically created a 90-day agreement to start with, and now the boat’s had a birthday. We can’t do business like that. We created a precedent here.”
The permit for the 125-foot vessel would run about $3,750 for the year in mooring costs.

“I think the city made a lot of exceptions for this whole operation,” said Corona del Mar resident Dan Purcell during the meeting. “I think you need to nail something down.”

While Welsh agreed a fee should be paid, he recommended that a more formal long-term relationship with the boat and the city be looked at, instead of a flat mooring permit fee.

“The one thing that not everyone realizes is that, compared to a normal boat, we do things that other boats aren’t involved in,” Welsh said. “We participated in the sinking of a whale around Thanksgiving off San Diego that saved the county $50,000 in disposal costs, and the education outreach we have been involved in and will be a part of — things at the nautical museum and Sea Scouts — is something to consider.”

Welsh added that he has been working with Visit Newport, the city’s tourism board, and has fulfilled multiple national and international media requests discussing the boat, Virgin Oceanic and Newport Beach.

“The average boat owner is not participating in all of that,” Welsh said.

Welsh recommended to the Harbor Commission a partnership between the yacht and the city — akin to Jacques Cousteau and his relationship with the Oceanographic Institute of Monaco — that could be beneficial to both.

“I’d like to look at this to be our traditional homeport,” Welsh said. “I grew up here, and I’d like to memorialize that as we go around the world, and have it be part of the mission.”

Mayor and Harbor Commission liaison Nancy Gardner recommended that a task force be formed to come up with a plan for Cheyenne and its place in Newport Harbor. New Harbor Commissioner Dave Girling will head the team, and he is expected to come back to the commission at the June meeting with a recommendation for a fee structure.

In the meantime, Welsh is having to deal with a more pressing issue for the future of his underwater expedition: a submarine with a cracked windshield (or pressure shield). The quartz dome currently on the sub has a tiny crack due to a manufacturing flaw and would not be able to withstand the pressures associated with deep dives.

Welsh said a new dome capable of withstanding nearly 13 million pounds of pressure is on the way, and it should be ready in about four months.

“We don’t need the new dome to continue testing, and we can do shallow-water dives and nearshore dives until the dome is ready.”

With saltwater testing completed in San Francisco, the carbon fiber and titanium craft finally made its way to Newport Harbor April 18, and should be mounted aboard Cheyenne in the near future.

While the Harbor Commission works out a fee structure for Cheyenne, the Lower Newport Bay dredging project is moving forward — and Cheyenne is once again in the path of the dredging equipment. A portion of Mooring Field “F” is marked in the first phase of the project to start May 5, and that will require the boat to be moved to another location in the harbor.

“It may need to move for dredging — but it’s like any of the other moorings in the harbor: It moves pretty easily,” said Chuck South, South Mooring Co. owner. “But it is big enough that wherever you put it, it needs some access to get on and off its mooring. It just doesn’t slide into the field real easily.”

A new location for the yacht had not yet been determined at press time.