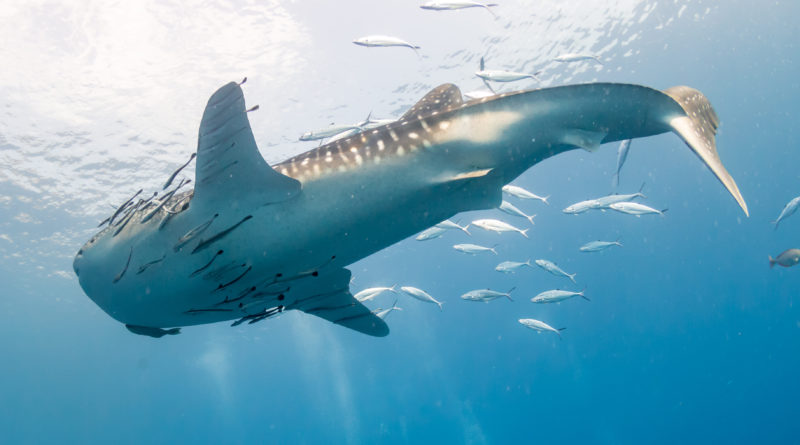 Getting up close and personal with the world’s largest fish is as humbling as it is thrilling, but are we invading their space?

LA PAZ, Mexico—The fate of Capt. Ahab at the end of “Moby Dick” was anything by happy.  Ahab, as anyone who read the novel would know, engaged in a climatic battle with the sperm whale he obsessively chased throughout the story. The end-of-story battle between man and whale features the use of a harpoon and rope. Ahab strikes the whale with the harpoon before becoming entangled with the attached rope – and is pulled out to sea as the large mammal swims away.

Oh, Capt. Ahab, you chased the wrong sea creature. You would have survived if you were obsessed with chasing the whale shark. Whale sharks might be the world’s largest fish, but they are “allergic” to humans. The fish mostly eat plankton and small fish. Getting up close and personal with a whale shark, which can grow up to 40-some feet in size, is quite easy to do – and you won’t need a harpoon (or any other weapon) when you finally meet this “gentle giant.”

A whale shark, to be sure, isn’t a whale. It’s a shark. One might even describe the fish as a “vegan shark.” So don’t let its large, rectangular mouth fool you – the whale shark isn’t inclined to swallow you (either partially or whole).

“Moby Dick,” of course, is a fictional story set in the 1800s. Swimming alongside whale sharks, however, is quite the real experience – particularly this time of year. It’s whale shark season in the Sea of Cortez, and there are no shortage of thrill-seeking humans who are making a “pilgrimage” to the Baja California Sur city of La Paz, just to have the opportunity to swim side-by-side with the world’s largest fish.

This writer was one of those thrill-seekers, arriving in La Paz at the start of the 2019 whale shark season. It was a sunny and warm day on Nov. 2, when this writer boarded a boat chartered by Baja Adventures Co. (which is based at Marina Costabaja, home of one of the largest marinas on the Sea of Cortez). We navigated around the Sea of Cortez for an hour before finally arriving at a section of the La Paz coast where several whale sharks were wading. There must have been a dozen boats in the area, each one with five to 15 people aboard.

Spend enough time here – both aboard the boat and in the water – and you quickly realize whale sharks are indeed worthy of the “gentle giant” moniker. I personally witnessed 10 whale sharks during my excursion, many of them coming within inches of a human being. Never once was there a threat of harm or injury. Each whale shark – most of them measuring 20 to 30 feet in length, by my estimation – navigated around the herds of boats and human beings as if they were white noise, nothing worth paying any attention to during quests for simple pieces of marine vegetables.

We’ll never know for sure, of course, if humans are doing more harm than good each whale shark season. Are we invading their space? Perhaps they don’t care we’re there? There are some regulations already in place, as to how many boats can be occupy the whale shark habitat at the same time – but should these regulations be stricter?

It’s unclear if there is any definitive data on whether or not the human interaction with whale sharks is harmful. There is one section of La Paz’s Sea of Cortez, to be sure, that is off limits to those seeking to experience the pageantry of whale sharks. Time spent in the other whale shark sanctuary, as well as how many people can be in the water at the same time from each boat, is heavily regulated.

So what do we know about whale sharks?

You want to swim alongside a whale shark? There is a five- to six-month window, starting as early as October and running as late as April of the following year. Whale sharks are generally drawn to warm/tropical waters, and the Sea of Cortez is no exception. La Paz’s weather this time of year – especially in October/November and March/April – is pleasant to warm. The mercury read low to mid-80s (Fahrenheit) during my weekend stay in La Paz (Oct. 31 to Nov. 3).

La Paz is also an ideal destination for whale sharks, as the shallow waters just off the city’s coasts are ripe with plankton – the main food source for the world’s largest fish.

What Do Whale Sharks Look Like? What Are Their Characteristics?

Whale sharks are long and possess shark-like bodies. The whale shark has a flat face with a long, rectangular mouth. Its underbelly is white. Each whale shark has two rearward dorsal fins, followed by a dual-lobbed fin. The topside and side are brown, with a series of patterned white dots and lines. Touching the top or side of a whale shark feels like rubbing against sandpaper.

None of the whale sharks I witnessed the weekend after Halloween were at maximum size – all of them were 30-foot long or smaller. It is possible for whale sharks to reach up to 40 feet in size and weigh as much as 40,000 pounds. A whale shark can live as long as 70 years.

Where Are Whale Sharks Found?

La Paz is certainly known for its whale shark population, but the large fish can also be found in Australia and parts of Asia.

What Is The Environmental Status Of Whale Sharks?

The World Wildlife Foundation added whale shark meat does have some value on international markets.

“Whale sharks are highly valued on international markets. Demand for their meat, fins and oil remains a threat to the species, particularly by unregulated fisheries,” WWF researchers stated. “They are victims of bycatch, the accidental capture of non-target species in fishing gear. And whale shark tourism presents a threat to the species as it can interrupt their feeding and sharks can be injured by boat propellers.”

There are several companies offering whale shark excursions in La Paz. Baja Adventure Co. was the company I went through – each trip lasts two to three hours, with snorkeling gear and wetsuit provided. A certified guide accompanies you; snacks and soft drinks are provided for each guest.