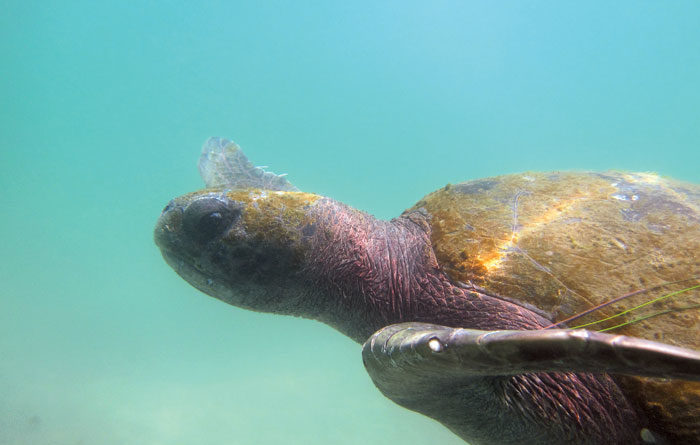 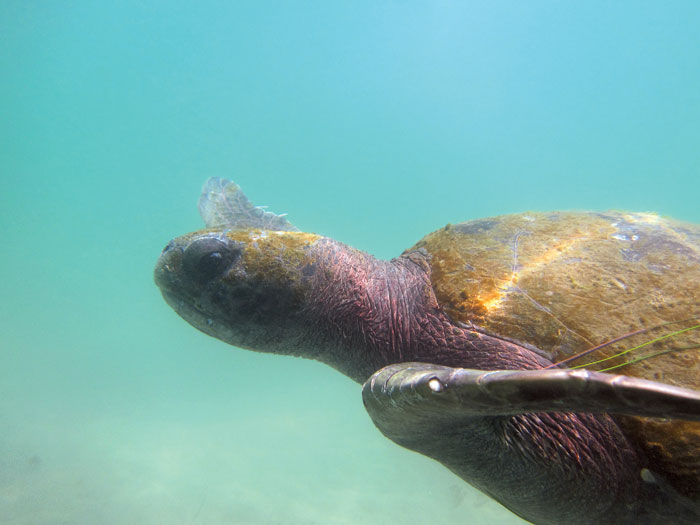 SAN DIEGO — As many as 60 endangered green sea turtles — weighing 200 to 540 pounds — have been increasingly spotted in San Diego Bay, searching for new warmwater environs now that Chula Vista’s old South Bay powerplant has been decommissioned and demolished.

“We are sill in the early stages of  our research on turtles and the powerplant, but we are finding they are more frequently venturing into areas north, where there is more boat traffic,” said Jeff Seminoff, leader of the Marine Turtle Ecology and Assessment Program at the National Oceanic and Atmospheric Administration’s Southwest Fisheries Science Center.

Seminoff has been studying San Diego’s green sea turtles for 20 years. His staff nets the large reptiles, tagging them and tracking their movements. His work helps scientists to better understand the turtles’ diet, population structure, sex ratios, and food and habitat decisions.

His team heads out every two weeks from June-October to net the turtles and bring them to shore aboard a 17-foot open powerboat. They are then examined before being released.

Green sea turtles are highly migratory animals, swimming thousands of miles to feed, nest and grow. They use San Diego Bay as a foraging habitat, nesting in Mexican waters.

An abundance of eelgrass on the bay floor makes for an ideal foraging ground for these turtles, which weigh 200 to 300 pounds on average. The largest one tracked is a robust 540-pounder.

“These are living dinosaurs,” he said.

The local population of 50 to 60 turtles mainly congregated adjacent to the South Bay powerplant site, where warm water once poured into the bay. Located in the most southern portion of the bay, this warm sanctuary kept the green sea turtles out of the commercial area of the harbor and away from most boats.

“It (warm water) would flow in, and the turtles just loved it,” Seminoff said. Water temperatures would reach 79 degrees Fahrenheit in winter, when the plant was in operation. That was much warmer than the 52-degree water found elsewhere in the bay.

But the turtles lost their year-round warmwater refuge when the powerplant went off line two years ago. Since then, researchers have tracked the turtles heading into different portions of the bay.

“Putting two and two together suggests there are going to be increased risks of boat strikes, because of the changes in behavior of the turtles,” he said.

Boat strikes have posed a challenge for the reptiles, which pop their heads up to the surface for air from time to time. “They are pretty savvy, so it’s going to take a boat traveling at high speed to catch a turtle off guard,” Seminoff said.

The Port of San Diego has a speed limit in the South Bay, south of the Sweetwater Channel, which helps prevent accidents, explained port spokeswoman Marguerite Elicone. The speed limit is 5 mph outside of the navigational channel.

Educational outreach information on the sea turtles is provided in the port’s boating brochure and on the website — and port representatives speak to boaters about the turtles at  boater outreach events. Additionally, the port has an environmental education program with kindergarteners, to teach them about San Diego’s green sea turtles.