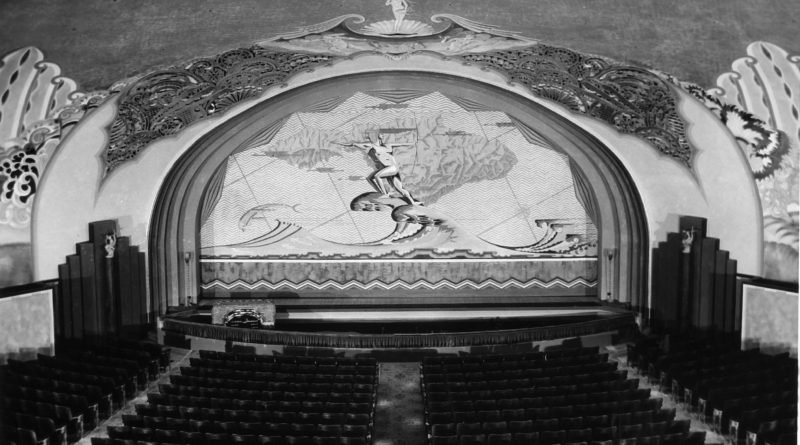 The Catalina Island Company has expressed willingness to work with the city to keep the theater open on a one-show-a-month basis.

AVALON—Residents and visitors to Catalina Island bid farewell to 2019 and with it, daily feature films at the Avalon Theatre in the Catalina Casino.

Feature films were ushered into Avalon in 1929 and were ushered out with the beginning of 2020, as the theater was the only one on the island showing new flicks. However, there are efforts to maintain at least some feature film presence at the famed theater.

Catalina Island Co. Senior Director of Marketing & Communications Kristin Metcalfe said in an email the company is actively meeting with a number of individuals and groups discussing other, hopefully economically sustainable ideas. One of those ideas: working with the city to keep the theater open on a one-show-a-month basis.

The Catalina Island Co. announced in November 2019 it would be closing the curtain on feature films, starting Jan. 1. A statement provided cited costs and decreasing attendance due to digital on-demand services such as Netflix, Amazon Prime and Hulu.

“As we’ve learned over the last few years, the issues with feature films being shown at the theater are emblematic of the difficulties facing movie theaters in small communities across the country,” Metcalfe said in an email.

The theater remains open for tours and special events, such as the Silent Film Festival, the Catalina Film Festival and the Avalon School graduation.

“This has really hit a nerve and not just in this community,” Benson said.

Benson, who grew up in Avalon going to the theater and now lives on the mainland, said the movies provided something for families to do and without them, some families will be excluded from using the theater.

“Our ask of the Island Company and city is to make the theater available to the community once a month to show a free or low cost movie,” Benson said.

A letter was sent to the Catalina Island Co. and City Council on Dec. 17, 2019 on behalf of the thousands of people who signed the petition, asking the two parties to commit to hosting a once-per-month free or low-cost family movie night in the Avalon Theatre.

“I’ve been working the Island Company and this organization to come up with some solutions,” City Council Member Steven Hoefs said.

Hoefs announced at the Dec. 17, 2019 City Council meeting the Catalina Island Co. is willing to work with the city to show a once-per-month free or low-cost family movie night in the Avalon Theatre. Hoefs said the exact details of that proposal still need to be worked out before anything could move forward. He said he is hopeful something can be worked out in the next month or so. He also said they are working on some ideas for other possible family-friendly entertainment options in the theater, such as screening older films.

A dose of history

Commissioned by William Wrigley Jr. at a price tag of $2 million, the Catalina Casino opened on May 29, 1929, and inside it was the first theater to be built for sounds movies.

According to dunnedwards.com, in the theater’s early days, movie studio tycoons such as Cecil B. DeMille, Louis B. Mayer, and Samuel Goldwyn frequently came by yacht to the Casino to preview their newest cinema productions.

A drop in attendance, cited as part of the reason for the closure by the Catalina Island Co., is not something unique to the Avalon Theatre, but a nationwide trend. In 1930, weekly cinema attendance in the U.S. was approximately 65 percent of the population according to an article published in the University of Dayton’s Issues in Political Economy, 2002, Vol. 11, titled “The Decline in Average Weekly Cinema Attendance.”

The percentage of the U.S. population that went to the cinema on average weekly decreased to about 50 percent in 1949, according to the same article. Attendance fluctuated in the following years before hitting about 10 percent in 1964 where it hovered through the 2000s.

Despite the popularity of theaters in the 1930s, some years the Avalon Theatre would close for the winter or only show films on the weekends, according Catalina Island Museum Director of Marketing & Public Relations Gail Fornasiere. She cited old Catalina Islander newspaper ads to point out occasional seasonal closures continued all the way through the 80s, varying from year-to-year.

“It definitely ebbed and flowed with the seasons,” Fornasiere said.

Much of the theater’s original art deco charm still exists today. The 1,184-seat theater still welcomes guests with hand-painted floor to ceiling murals, a nearly 50-foot, domed ceiling and a pipe organ built by the Page Organ Company of Lima, Ohio – one of the last of its kind in the world that’s still in operation. Even through 2019, movie goers could catch a performance on the original Page pipe organ every Saturday and Sunday before showtime.

The theater is also famed for its legendary acoustics, which prevented any sounds from the upstairs ballroom from penetrating the theater. The acoustics were copied by the builders of Radio City Music Hall in New York. Visitors will still be able to enjoy the architecture and ambiance of the theater through tours and other events.

“It has had an impact on Hollywood, the island history and even beyond,” Fornasiere said.

Benson acknowledged the economic challenges of running the theater but said it has been maintained for 90 years through more dire economic conditions. For many, including Benson, movies in the theater have been a vital activity for the small community only reachable by boat.

“I really felt like that theater was a place where I could go and let a movie take me away,” Benson said. “And that was a really special thing to me growing up.”