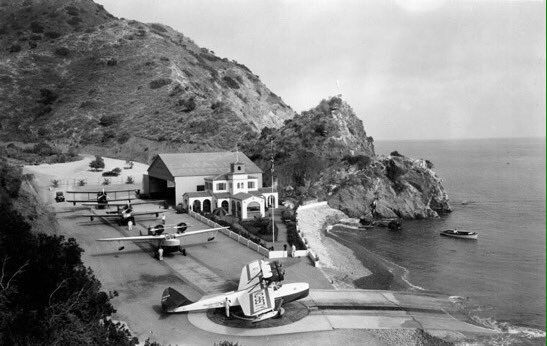 CATALINA ISLAND—While U.S. Marines and U.S. Naval Construction Battilions, more commonly known as “Seabees,” finished a training assignment to complete a runway for Catalina Island’s Airport in the Sky, landing planes on the Island used to look much different.

Pictured here is Hamilton Beach Airport between 1931-1942, according to the tweet by Aviation Hub HQ. At the time only amphibious planes were permitted to use the terminal at modern-day Hamilton Cove. In the photo, a Douglas Dolphin aircraft can be seen.

The Hangar, which can still be visited at Airport in the Sky today, was also originally constructed for use at Hamilton Beach airport. Wilmington Catalina Airlines offered daily flights to the Island, but now the airport is only for private use, for transporting medical supplies, and other such uses.