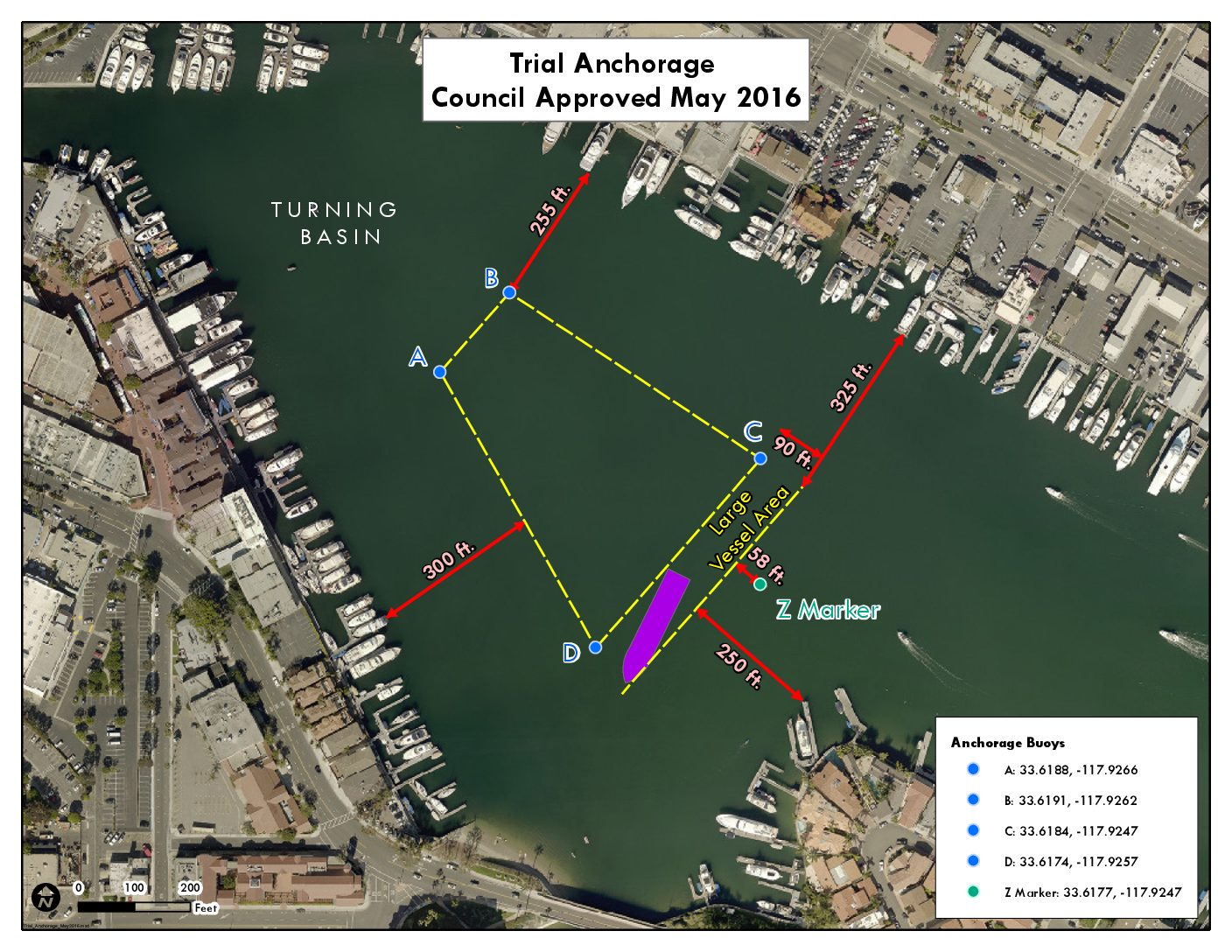 Newport Beach’s trial anchorage near the Turning Basin could be a featured installment each summer.

NEWPORT BEACH ― Plans to make Newport Beach’s second anchorage a permanent feature are still being vetted, but boaters will still be able to drop anchor in open water near the Turning Basin throughout the summer as temporary markers for the seasonable venue were installed prior to Memorial Day.

Newport Beach’s Harbor Commission discussed the possibility of making the West Anchorage a permanent seasonal feature. The city’s harbor is already home to a permanent anchorage.

Harbor Resource Manager Chris Miller seeks to have the commission come to terms with a plan to establish a second permanent anchorage before approaching Newport Beach City Council for approval.

There are other important harbor matters such as dredging projects, code enforcement and the new harbor management processes, Blank pointed out, but the seasonal anchorage is a benefit for boaters.

“I feel the West Anchorage is a good (perhaps even great) enhancement for the harbor because it offers boaters (both those visiting form other harbors as well as boat residents in Newport) a safe, well protected alternative place to anchor at no cost,” Blank stated. “It alleviates some congestion in the very busy ‘5 Points’ section of the harbor east of Lido Isle, is adjacent to an area of high concentration of businesses, services and amenities boaters most want to visit when they come ashore and, when the new Public Pier at Central Avenue is constructed later this year will provide a new, convenient level of connectivity for boaters and shore-side services.

“Further, the concerns over noise and other nuisances associated with the West Anchorage simply have not materialized,” Blank continued.

The Harbor Commission, according to Blank, is in favor of making this anchorage permanently seasonal.

“Mariners should be able to expect that the West Anchorage will be setup and operational for some period each summer, but that it will not be in place all year long,” Blank said. “While this is my belief, the matter requires a full public hearing and discussion before a formal recommendation can be voted on by the commission.”

The biggest challenge is the course of action needed to establish a permanently seasonal anchorage, Miller said, as the process includes obtaining approvals from multiple regulatory agencies.

Miller is hopeful the West Anchorage will be made a permanent seasonal fixture in the harbor by next summer, despite the long and tedious process.

“I believe the USCG approval, the [Harbor Commission] recommendation and the City Council approval can all be obtained before the summer of 2018, so I anticipate the West Anchorage will become ‘seasonally permanent’ for the 2018 Memorial Day Weekend,” Blank responded in an email to The Log.