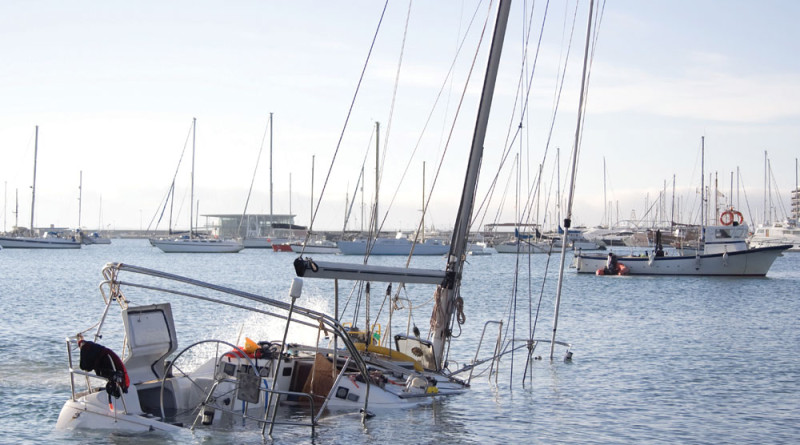 STATEWIDE — There is plenty of chatter of doomsday scenarios regularly presented to boaters running the gamut from El Niño and King Tides to shoaling or an offshore oil spill that will impact your marina.

Since 2014 we have certainly witnessed calamity strike local harbors, such as the Nor’easter winds causing damage in Avalon Harbor, commercial fisherman losing business because of an oil spill off the coast of Santa Barbara in May 2015, shoaling at the entrance of Ventura Harbor in mid-January, and an El Niño storm causing many boats to become submerged or damaged in San Diego Bay just before the calendar flipped to February.

What recourse do boaters have when these disastrous events strike and cause expensive property damage, such as a vessel becoming submerged or two boats striking together?

Recent shoaling in Ventura spawned a need for financial assistance at Ventura Harbor, where Harbormaster John Higgins said he and port district officials have been campaigning to gain as much assistance as possible for waterfront users impacted by the recent shoaling.

“Because we are a small harbor we also realized the possible economic losses that may have resulted from the sudden restrictions,” Higgins said. “We worked aggressively with the Ventura County Sheriff’s Office of Emergency Services to explore relief options. We held a town hall type meeting last week where we gave information and applications for programs like the federal [Small Business Association] Loans.

“To date we have had around 18 applications turned in to be forwarded to the SBA group. This is the beginning of the process that may later help local fishermen and businesses recover from a losses suffered due to this local natural disaster,” Higgins continued.

Boaters, anglers and commercial fisherman were not able to freely access the ocean ever since a sandbar developed at the harbor entrance in mid-January. Higgins said the port district was prepared for the shoaling event and, with the assistance of the U.S. Coast Guard and local maritime community, was able to address the local emergency.

“The Port District was in a very good position to deal with this emergency. Our Harbor Patrol is integrated with all the local Public Safety Agencies and was able to formulate strategies, plans, and mitigation measures to ensure the safety of boaters and the rescuers were immediately put in to action,” Higgins said. “Our small harbor has a very active dredging program.”

He added the port district’s ability to quickly respond to the shoaling event helped minimize the emergency’s negative impacts.

“The dredge has continued to make progress and we are very close to lifting the Safety Zone issued by the USCG Captain of the Port,” Higgins said. “The actual sandbar has been effectively mitigated and now we have the dredge itself being the obstacle.”

Boaters in San Diego were hit hard by heavy winds on Jan. 31, causing many vessels to either collide with other boats or become at least partially submerged while docked or moored. One boater told the local CBS affiliate that he found out his boat was partially submerged after seeing it on a newscast. He reportedly lost most of his belongings aboard the vessel and, according to what he told CBS, was not properly insured.

“I’m devastated. This is basically everything I own. I lived here. It had all my belongings. I’m at a loss of what to do,” Fred Minters told CBS after the winds and storm left San Diego Bay.

The same CBS report stated several boats were either submerged or, thanks to the wind, dragged hundreds of feet along the water before crashing at a pier or where water met land.

Ray Ashley, CEO of the Maritime Museum in San Diego, witnessed some of the damage first hand. Many boaters whose vessels suffered damage are dealing directly with insurance. There were situations where physical damage was caused from two boats slamming into each other. A boater seeking state or federal aid to assist with damages would be similar to two motorists who collided with each other while driving attempting to do the same. Boaters who suffered from the high winds event are trying to settle their respective damages through insurance no different than had the same situation occurred on land with automobiles.

One sticking point, Ashley added, is some vessels involved with wreckage were not insured.

A spokesperson with the Port of San Diego said the local government agency does have a plan in place to minimize as much loss as possible during a natural disaster.

“The Port of San Diego works to plan for and mitigate losses as a result of natural disasters by working with our insurance carriers and local authorities to prevent or lessen damage occurring on port property,” port spokesperson Marguerite Elicone said. “In the event of an impending disaster the port would activate its Emergency Operations Center to take steps to actively control crisis response and prevent damages or injuries to the extent possible. We do not have a program where boaters can seek assistance for damages.”

Aid, if available, might not always come from government agencies. On some, although rare, occasions a private party is held responsible for a disastrous event. Such was the case in Santa Barbara about nine months ago, when an oil spill near Refugio State Beach impacted the a portion of the Central California coast. Plains All American Pipeline, who earlier this year was found of doing no wrongdoing by the Santa Barbara County Grand Jury, claimed responsibility of the oil spill shortly after the underwater pipeline break occurred and initiated a claims process to help make whole those who validly suffered harm from the offshore disaster.

Another avenue for financial recovery resulting from a harbor emergency is insurance. BoatUS offers boating insurance policies covering some damages, depending on the type of policy purchased.

“We can certainly advise what our policies might cover (following investigation and confirmation of the circumstances of a loss). Boat owners should always review their policy language to understand what is covered with their particular policy,” BoatUS Vice President of Public Affairs Scott Croft said.

Croft added weather events, natural disasters and salvage recovery are generally covered by insurance. The extent of coverage, if any, depends upon the policy purchased.

“Physical damage due to weather events or natural disasters (i.e. Hurricanes, Tsunamis, El Niño related storms) is covered under our policies, assuming there is coverage for the boat. Salvage recovery and removal of wreck can, and typically do, play a large part of the coverage an insured wants to make sure they have on their policy in the event they are affected by a natural disaster,” Croft said. “This is why we offer – and strongly recommend –a policy have full salvage coverage (up to the policy limits) that is separate from hull coverage. Some policies limit salvage to a percentage of hull value.  This is not good as you may end up having to pay some salvage costs from your hull damage check.”

Insurance could also cover a vessel’s physical damages from events such as an oil spill, according to Croft. Someone whose boat was physically damaged from the Refugio Oil Spill in May 2015 could file a claim if the event is part of his or her policy. BoatUS would determine whether to pursue a subrogation against the party responsible for the oil spill.

“Physical damage, salvage recovery, removal of wreck and even liability coverage can be triggered due to a grounding as a result of shoaling, however loss of use (or a perception of loss of use by the boat owner) because of shoaling would not be a covered loss,” Croft said. “Other than that it is pretty straightforward.  We do not have any named storm ‘type’ exclusions on the West Coast.”

In a separate action the SBA offered commercial crabbers emergency assistance, it was announced on Feb. 3. Loans up to $2 million for 30 years, with interest rates of 4 percent for small businesses and 2.625 percent for nonprofit organizations, were made available to those impacted by the delayed Dungeness crab season.