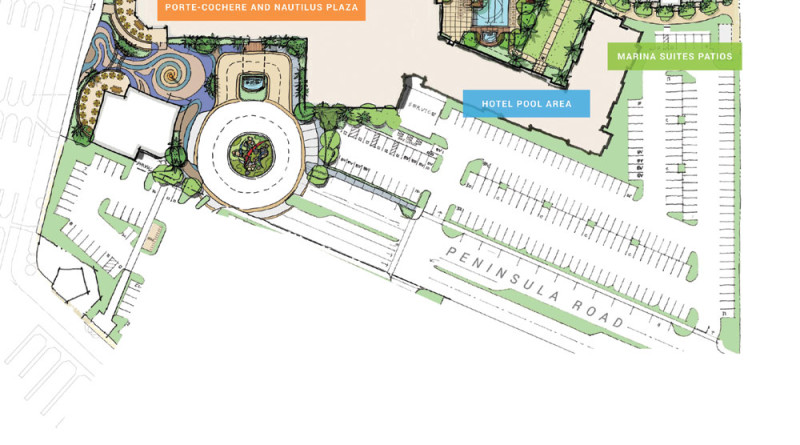 VENTURA — The Ventura County Board of Supervisors unanimously approved the sixth amendment to the Channel Islands Harbor Public Works Plan (PWP) during a March 22 meeting, paving the way for Brighton Management to build a new hotel and restaurant on the harbor’s peninsula.

The long-closed and blighted properties — Casa Sirena Hotel and the Lobster Trap Restaurant — are now one step closer to being razed with a brand new hotel and a 5,000-square-foot restaurant taking their place.

The amendment to the PWP was necessary to increase the number of hotel rooms from 184 to 210 and raise the building height to 55 feet (up from 45 feet). The new moderate cost hotel will include ample meeting and parking space. The previous meeting space was located in the Lobster Trap Restaurant, accounting for 7,000 square feet of the 12,000-square-foot space.

The Nautilus Plaza area of the property would provide a seating area where patrons waiting for seating at a restaurant could enjoy a harbor view as they wait.

“This new development will make the harbor a lot more welcoming to the public and not just for the hotel users,” said Supervisor Linda Parks.

Brighton Management held nine public forums since 2015 to share its vision for the 10-acre parcel. The feedback was positive during those meetings and the project garnered strong support.

The new project will include a 10-foot-wide 1,500-foot-long waterside promenade; bicycle racks and rentals will be available to encourage people to tour the harbor without using a car. Charging stations will be available for electric cars; and, the property will be able to accommodate guests being shuttled in from local airports and train stations.

Three speakers from the March 22 meeting all spoke in favor of the project and vocalized one main concern: they wanted to be sure the traffic study took into account other development in the area including Fisherman’s Wharf on the harbor’s east side as well as new construction at the nearby Ventura County Naval Base.

Supervisor Steve Bennett complimented the speakers for doing their homework and for bringing both their support and concerns: “The most valid concern is the cumulative impacts on traffic from all development going on in the area,” he said.

Supervisor Parks explained the traffic study takes into consideration all projects in the area.

Speaking about the Board’s approval, Harbor Director Lyn Krieger said, “It’s been a long wait to get such great plans in place. The recession decimated the hotel industry. We have had several developers interested, but Brighton’s plans are the best I’ve seen and the new development will provide access for hotel guests, locals and tourists to enjoy our waterfront.”

The amendment to the PWP will go to the California Coastal Commission in April and then again to the state agency in the fall with final plans. Demolition and construction are slated to begin in 2017 with the new hotel and restaurant to open in 2018.

The estimated cost for the complete the project is $35 million