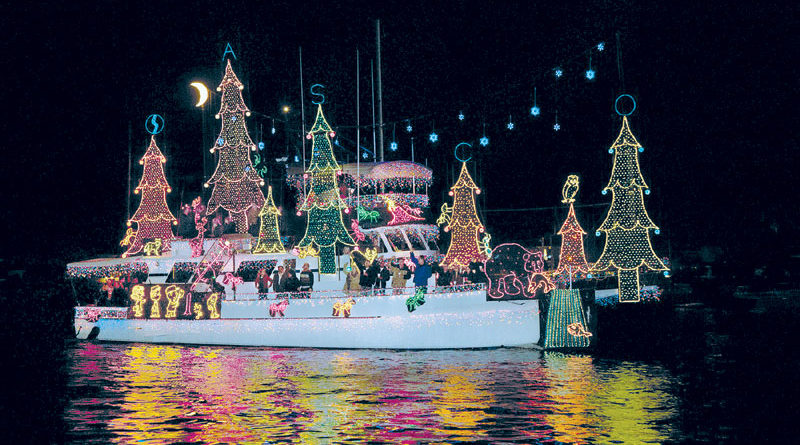 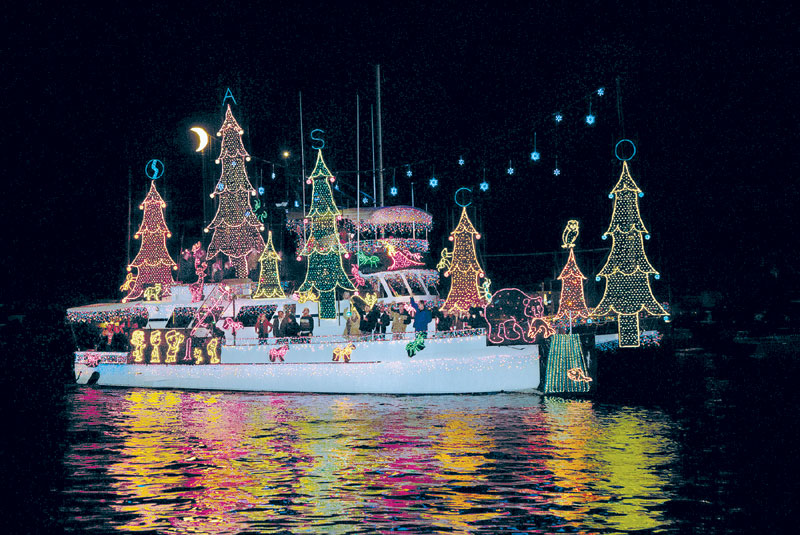 Throughout Southern California, boaters are putting the finishing touches on boat decorations and are piping holiday tunes through their onboard sound systems. It’s that time of year again when harbors coastwide host festive holiday boat parades.

While on land, homeowners are decorating their houses and lawns for the holiday season, boaters are just as busy stringing lights on their bows and sterns. Some boaters spend the entire year planning their boat parade entries, in order to impress the crowds of spectators and the parade judges who are looking for creativity and originality.             While some boaters will be decked out to win decorating contests, others will be at the boat parades mainly to take in the magnificent view of lighted boats and decorated shoreside homes with family and friends.

There is perhaps no better way to start the holiday season, and Southern California boaters have been celebrating this way for decades. In fact, the Newport Beach Christmas Boat Parade — the granddaddy of all the SoCal floating holiday events — is returning for its 103rd year.

San Diego Bay Parade of Lights
When: Dec. 11 and 18, 5:30 p.m.
Details: The Port of San Diego’s 40th annual San Diego Bay Parade of Lights will begin with a fireworks display. Boaters will decorate their vessels to the theme of “Back to the Future.”
Route: A Coast Guard cutter will lead the boats on a cruise from the south end of Shelter Island to the downtown waterfront and the Coronado area. The parade takes between one to one-and-a-half hours to complete.
Viewing: Spectators are reminded to arrive early, since parking at Harbor Island is available on a first-come, first-served basis. Less crowded viewing areas include the north and south ends of the Embarcadero, the bayside pathway along Coronado and the waterfront park behind Seaport Village. The San Diego Maritime Museum will host an auxiliary dinner event aboard the vessel Berkeley, where viewers can enjoy a buffet and view the decorated boats up close. Reservations must be made by Dec. 12. Call (619) 234-9153, ext. 106.
Information: sdparadeoflights.org.

Mission Bay Christmas Boat Parade of Lights
When: Dec. 10, 7 p.m. Details: More than 60,000 spectators at Mission Bay Park are expected to watch the boat parade, which has been cruising through the bay since the 1970s. The parade concludes with a fireworks display at 9 p.m.
Route: The parade begins at the Quivira Basin and follows a 5-mile route along the shore of Mission Bay. Viewing: Riviera Shores, Crown Point, Santa Clara Point, the east side of Vacation Island; west side of Fiesta Island. Information: (858) 488-0501.

Dana Point Parade of Lights
When: Dec. 9, 10, 16, 17, 7:30 p.m.
Details: The 37th annual Parade of Lights will carry the theme “Santa Salutes the ‘70s.” Boaters from throughout Orange County are expected to join the parade and compete for awards in a variety of categories.
Route: The parade route will begin at the harbor entrance. Boats will head north to the Embarcadero and turn around, go right to East Marina, turn around at the bridge, exit and head along the outside of the harbor before heading into West Marina, turn around at the bridge and head back toward the starting point.
Viewing: Anywhere in the harbor, for free. Reservations are required for viewing at local restaurants. Dana Wharf Sportfishing will offer boat rides at $25 per adult and $15 per child. Reservations can be made by calling (949) 496-5794.
Information: (949) 923-2255; danapointharbor.com.

103rd annual Newport Beach Christmas Boat Parade
When: Dec. 14-18, 6:30 p.m.
Details: The harbor’s most anticipated holiday event, the 103rd annual Newport Harbor Christmas Boat Parade, will start nightly off Bay Island. This year’s theme is “Feelin’ Christmas-Sea in Newport Beach.” Fireworks, launched from the Balboa Pier, are scheduled at the end of the parade’s last night — beginning at 9 p.m. Dec. 18.
Route: The parade will start at the Bay Island channel. Parading boats will go around Balboa Island, north to the Upper Bay channel, west near Mariner’s Mile, around Lido Isle, east alongside Balboa Boulevard near the jetties and north near the Little Island channel, before heading back west to the Bay Island channel. A map of the parade route is available online.
Viewing: The best shoreside viewing spots are around the Balboa Fun Zone, where spectators can also catch a glimpse of the harbor’s decorated homes. Reserved seating is offered at a variety of places along the harbor, including the American Legion, the Newport Sea Base and the Balboa Bay Club. Charter boat operators are also taking reservations for parade night cruises. Local traffic is heavy on all parade nights and parking is extremely limited, so it is wise to show up early.
Information: Newport Beach Chamber of Commerce at (949) 729-4400; christmasboatparade.com.

Newport Harbor Nautical Museum/ExplorOcean
When: Dec. 14-18
Details: The museum offers a front-row view of the annual Christmas Boat Parade from the museum’s courtyard. Capt. Mike Whitehead will broadcast live from the courtyard, providing boat parade commentary beginning at 6:30 p.m. Children’s boat-building activities will be offered, along with food, beverages and live music. The museum will also host a Holiday Open House Dec. 15, where light refreshments will be served. The preview center and galleries will remain open until 8 p.m.
Cost: Admission for non-members is $10. If a membership is purchased upon arrival, admission is free.
Information: explorocean.org.

Huntington Harbour Boat Parade
When: Dec. 10-11, 5:15 p.m. Details: The year’s theme for the 49th annual parade is “Island Serenade.” Duffy runabouts and other small electric boats are welcome to participate along with the larger vessels in this year’s event.
Route: The parade route will run down the main channel of the harbor and loop back at the fuel dock. The complete route, skippers’ information, entry forms and additional details are available at hhboatparade.org.
Viewing: Public beaches around the main channel edges of Trinidad, Humboldt and Davenport islands. Information: hhboatparade.org.

Naples Island Holiday Boat Parade, Long Beach
When: Dec. 17, 6 p.m.
Details: This year’s theme for the 65th annual parade is “TV Land Holidays.” Boaters and homeowners will pay tribute to their favorite holiday specials.
Route: Large boats start at 6 p.m., and will assemble along Lido Lane off the seawall in front of Naples Plaza. The parade will begin at Naples Plaza Park and head west, where boats will turn around before the Second Street Bridge, then continue west before ending at Appian Way. Small boats start at 6:30 p.m. and will assemble in Marine Stadium. The parade will begin at the Appian Way Bridge and travel south along Bayshore Drive. The parade will enter Naples Canals through the main entrance in front of the Colonnade and travel clockwise around the main canal. Upon exiting, boats will finish in front of Long Beach Yacht Club.
Viewing: Any public area around Naples.
Information: naplesca.com.

Long Beach Parade of 1,000 Lights
When: Dec. 10, 6:30 p.m.
Details: This year marks the parade’s 29th year. The parade theme is “Light the Night,” and it will celebrate Port of Long Beach’s 100th anniversary. There will be free chili, cornbread and hot dogs for all participants at 8:30 p.m. at the awards banquet following the parade.
Route: Boats will line up starting at 6 p.m. on the east side of Downtown Marina at Island Grissom. The parade will circle through Shoreline Marina.
Information: (562) 435-4093; shorelineyachtclub.com.

Marina del Rey Holiday Boat Parade
When: Dec. 10, 6 p.m.
Details: This is the event’s 49th year, and the fun begins with a fireworks show at 5:55 p.m. off the south jetty, followed by the parade. Spectators may catch a glimpse of Santa Claus, serving as the parade’s grand marshal. This year’s theme is “Christmas Carnivale.”
Route: The parade will cruise through the main channel of the harbor and circle at least three times. The south turn will be parallel to Pacific Avenue in Marina del Rey and the jetty bridge in Playa del Rey. The north turn will be at the end of “F” Basin.
Viewing: Burton Chace Park and Fisherman’s Village.
Information: (310) 670-7130; mdrboatparade.org.

King Harbor Christmas Boat Parade
When: Dec. 10, 5:30 p.m.
Details: This will be the parade’s 20th year. The parade will honor the original founders and organizers, Hal and Ines Davidson and Barbara Cairns, who will also serve as this year’s grand marshals. The parade theme is “A Storybook Christmas.” Proceeds from the parade will be shared with the King Harbor Youth Foundation, Let’s Go Fishing Foundation and Sea Scouts Ship 618.
Route: The main channel of King Harbor. Viewing: Fisherman’s Pier, the seawall and all along the harbor, wherever there is a view to the main channel — from King Harbor Marina to the Redondo Beach Pier.
Information: (310) 376-2459; khyc.org.

Channel Islands Harbor Holiday Parade of Lights
When: Dec. 10, 7 p.m.
Details: In its 46th year, the parade’s theme will be “Tropical Holidays.” A full day of activities begins at 10 a.m. and runs until 8 p.m. Before the parade, a variety of attractions are scheduled starting at 10 a.m. at Harborview Park, with Snow Play and a visit from Santa and Mrs. Claus from 11 a.m.-3 p.m. Arts and crafts and food vendors start at 4 p.m. There will also be business- and dock-decorating contests.
Route: Begins in front of Peninsula Park and heads to the Main Channel, turns at Hobie Beach, loops in front of the launch ramp, and then heads back to Pacific Corinthian Yacht Club, where the route repeats for a second run.
Viewing: Parks, walkways that line the route, most harbor restaurants and harbor charter cruise boats. Information: channelislandsharbor.org.

Ventura Harbor Parade of Lights
When: Dec. 16-17, 7 p.m.
Details: In its 35th year, the boat parade theme is “California Dreamin’.” Harbor festivities include visits by Santa and Mrs. Claus, a fireworks display each night following the parade, live reindeer, Victorian carolers, a toy solider band, holiday characters and a craft station. Route: Around the edge of the harbor near Spinnaker Drive.
Viewing: Anywhere in the harbor around Spinnaker and Navigator drives. The best views are from the promenade, harbor view restaurants or the water. Ventura Harbor Boat Rentals and Island Packet will offer public cruises
Information: (805) 477-0470; venturaharborvillage.com.

Santa Barbara Parade of Lights
When: Dec. 12, 6:30 p.m.
Details: Festivities for the 26th annual parade begin at 3 p.m. at Santa’s Village on Stearns Wharf with a visit from Santa, 10 tons of snow and holiday music. This year’s boat parade theme is “Candy Cane Holidays.” A short fireworks display will follow the boat parade.
Viewing: Stearns Wharf and the breakwater.
Information: (805) 897-1962.