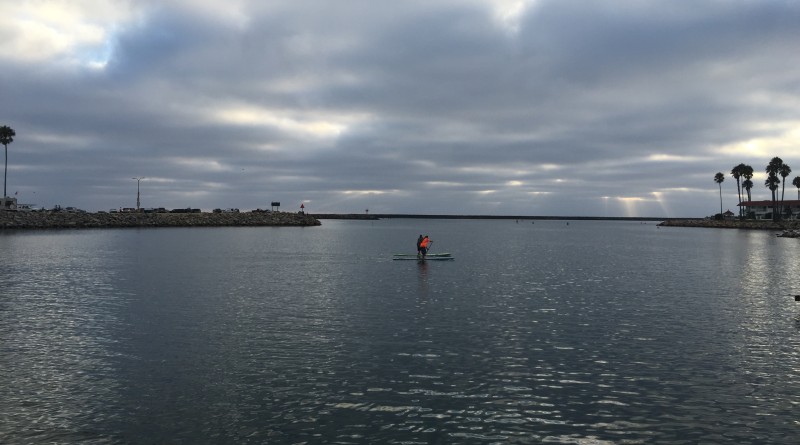 Standup paddleboards and kayaks are now allowed to operate in Oceanside Harbor after the City Council amended the Municipal Code that prohibited the human-powered watercraft from operating in the bay.Parimal M. Rohit photo

OCEANSIDE — Standup paddleboard (SUP) and kayak users earned a significant victory in Oceanside on Aug. 24 as the local City Council unanimously approved changes to the Municipal Code to allow for human powered craft (or personal watercraft) in Oceanside Harbor.

SUPs and kayaks were previously prohibited in Oceanside Harbor, though it was not uncommon to see someone navigating in between slips or across the main channel aboard a kayak or SUP.

Human-powered crafts are now permitted on the harbor so long as they follow protocol on yielding the right-of-way to other vessels, such as sailboats and powerboats.

“The proposed ordinance … will allow SUPs, kayaks, surf skis, outrigger canoes, dinghies, inflatable boats … and pedal-boats to be operated in the harbor,” city staff stated in a report to City Council members. “All human powered vessels authorized in the harbor … shall give right of way, yield right of way, and keep completely clear of all other non-human powered vessels, including both sail and powerboats.”

Float tubes, air mattresses and floating chairs are still prohibited from being used in the harbor and not included in the Municipal Code amendment.

Human powered craft use in Oceanside Harbor became an issue after a recent proliferation of kayak and SUP use in navigational channels despite the city’s prohibition against such craft.

While human powered craft use increased in recent years city officials were lax in enforcing the city’s prohibition against kayaks and SUPs in the harbor.

Members of the city’s Harbor and Beaches Advisory Committee recommended lifting the prohibition in April by a 4-2 vote.

Oceanside Harbor Manager Paul Lawrence said the intent of the new policy was to promote safety and clarity.

“The amendment to Oceanside City Code Chapter 29a will clarify right-of-way within the harbor and the channel to the ocean: human-powered craft must keep clear of sail and power vessels. Safety is first goal of this change as is reducing the incidence of near misses between operating vessels and human-powered craft,” said Lawrence.

He added the increased use of SUPs and other human powered crafts in Oceanside Harbor created a situation where city law had to be amended and updated.

“Boaters have experienced many human-powered craft-related impediments to safely operating within the harbor, especially maneuvering near the boaters’ slips,” said Lawrence. “Departing a slip and leaving the slip’s fairway, then entering the wider harbor area is a critical time for boat operators because of the limited room to maneuver as well as dealing with prevailing winds and tidal currents that can move the boat away from its intended path if it is unable to maintain maneuvering speed.”

Harbor Patrol might provide safety education to boaters, kayakers, SUP users and other on the water.

“We have had preliminary discussions with the Oceanside Police Department/Harbor Patrol about educational stops out on the water and we will discuss further steps,” said Lawrence.

Separately the City Council accepted an $8,100 grant from the Division of Boating and Waterways to fund the Oceanside Small Craft Harbor District’s efforts to remove and dispose of abandoned, dismantled, submerged or wrecked vessels from the harbor.

“At least in part due to the post-2008 economic downturn, a few vessel owners have been unable to continue maintaining their boats and pay their slip fees,” city staff stated in a report to council members. “As such, several owners have already abandoned their vessels and others may do so.”

Oceanside’s Harbor Division applied for a Surrendered and Abandoned Vessel Exchange (SAVE) grant in July 2015 and received $7,900 two months later. The grant runs through Sept. 30, 2017 and currently has $4,457.41 remaining. The Harbor Division still has five vessels to dispose of as part of the grant.

City staff stated the estimated cost of disposing vessels is between $1,000 and $3,000 each.

Boats currently designated for disposal are stored at the harbor impound dock.