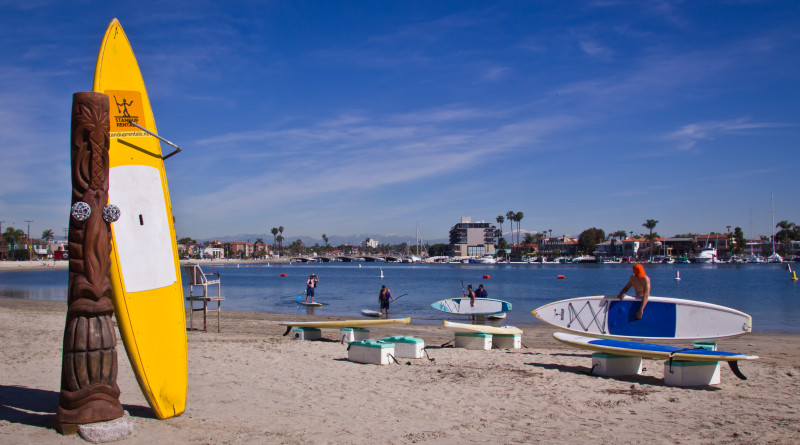 SOUTHERN CALIFORNIA ― Recreational watercraft uses – boats, kayaks, standup paddleboards (SUP) – are common activities at any given public harbor or recreational marina. However uses of human powered vessels, especially SUPs, in Southern California waterways continue to come under scrutiny by policymakers. Concerned constituents are often urging their local city or harbor representatives to enforce rules of the road in an effort to curb near-collisions involving boaters and kayakers or SUP users.

Proposed safety measures were most recently discussed at a Newport Beach Harbor Commission meeting, where commissioners and SUP operators within the city continue to search for a middle ground for boaters and other recreational vessel users to peacefully co-exist. Members of the commission stated they could be looking to SUP operations at Long Beach’s Alamitos Bay for guidance before potentially crafting safety measures for Newport Harbor.

Meanwhile officials down in Oceanside believe they are making progress in managing different uses in San Diego County’s northern-most harbor after the city recently lifted its ban on SUP use. Whereas Marina del Rey has the challenge of how to manage conflicting regulations and allowances when it comes to SUPs.

“A lot of boat owners would like us to enforce this no manually propelled watercraft rule without permission,” Dep. Richard Godfrey of Harbor Operations for Marina del Rey stated. “It’s really hard for us to regulate it, because there are just so many of them. It’s kind of like the CHP battling the speeders on the freeway.”

Despite a county ordinance prohibiting SUPs, DBH grants licenses to SUP businesses giving rental operators permission to rent out paddleboards, so “who are we to go out now and write citations to those using them in the marina,” Godfrey pointed out.

The boaters want to get rid of the SUPs, because they don’t want to have to deal with navigating around all the paddleboarders, according to Godfrey.

Godfrey added the marina wasn’t built for small craft recreational use, but instead for sailboats and powerboats to have access to the ocean.

“The marina has been around since the mid 60s, so a lot of the ordinances were written around that time. SUPs weren’t an issue back then,” Godfrey stated.

SUPs are more of an issue than other human powered watercrafts, because there are so many of them. As Godfrey pointed out, SUPs take a lot less storage space than kayaks as they are thinner and easier to stack, so a lot more can be stored and rented out by rental operators.

“We are not really in the business to be overly officious with this by issuing citations when people are trying to recreate,” Godfrey said. “It’s really innocuous to be out on an SUP, but it’s also dangerous. If you get out in front of a boat, the boat may not be able to stop or may not actually see them.

“That was the case with a sailboat that ran over a girl. I guess she was expecting the boat to avoid her and the skipper couldn’t see her,” Godfrey continued.

When asked what safety improvements could be made at Marina del Rey, Godfrey suggested limiting the number of SUP rental companies allowed to rent at one time. With fewer people out on the water and less congestion there would be less danger for SUP users to paddle around in the marina and more room for boaters to navigate out to the ocean.

Boaters concerned about increased SUP use in Marina del Rey could contact their local representatives or Los Angeles County Board of Supervisors, Godfrey suggested. The Small Craft Harbor Commission, which meets the second Wednesday of each month, provides an opportunity for public to voice their respective opinions and concerns.

Oceanside had a long-standing ban on SUP use for decades. The ban was initially intended for those paddling long boards across the harbor to go surf on the other side, according to Oceanside Harbor Police Office Jonathan Hoover. It was a hazard as boaters would have a hard time seeing those lying on their board paddling across the bay.

“With standup paddleboards coming onto the scene, our Harbor Manager Paul Lawrence wanted to do a revision to our code,” Hoover told The Log.

The ban was recently lifted by the City Council. Hoover admitted the city’s reversal of the SUP ban might have been overdue.

The challenge, however, is educating everyone from those who personally own an SUP to one-time renters of SUPs. Even boaters do not have mandatory boater education at this time, Hoover pointed out.

Educational pamphlets often end up as trash and waste, Hoover said. Accordingly the city is looking into using informational boards in primary locations where people launch their SUPs.

“From the police side of things, we are very proactive in educating the public out here,” Hoover said. “For the most part, we try to take an educational stance prior to an enforcement stance.”

Safety among SUP users and boaters has long been a topic of concern in Newport Beach. Members of the Newport Beach Harbor Commission discussed the potential of enacting safety measures during its Feb. 8 meeting.

“Navigable waterways… are under federal jurisdiction,” Newport Beach Harbor Commissioner Bill Kenney pointed out. “The Federal Boat Safety Act of 1971 defines a vessel as a watercraft that can be used as transportation on the water. Those operating SUPs, kayaks and other human powered vessels should know the basic rules.”

The Newport Beach Harbor Commission created a subcommittee to look into what is currently going on in the Newport Harbor with regards to SUPs.

A survey was conducted in 2013, and a safety pamphlet was created based on the findings. However the harbor commission decided it was time to readdress the issue of SUP safety.

“When something is brought to your attention on a number of occasions as perceived by boaters, we have the responsibility to do something about it,” Kenney stated. “The rental company operators are not doing an adequate job of instructing prospective renters on basic operation and safety of SUPs and other human powered vessels.”

The subcommittee identified and surveyed 20 SUP rental companies operating in Newport Harbor to determine how SUP safety is addressed. The survey focused on whether or not these operators provided instructions and training to renters as well as verbal or written safety information.

“The ACA is probably the best representative of this industry,” Kenney said. “This pamphlet contains the type of basic information that vessel operators need to know before venturing out into the water. Only one of the rental company operators we interviewed [in Newport Harbor] had this pamphlet available. However it was not required reading.”

With the results of the most recent survey, this Newport Beach subcommittee made numerous suggestions on improving SUP safety in the harbor.

A constituent spoke up saying he is not convinced there is a problem with SUPs and asked if there is a record of incidents, accidents, injuries or deaths. He also compared it to renting a bicycle where there are certain risks but does not require a license or to watch a video.

The Newport Beach Harbor Commission conducted another round of public and rental operator outreach at the March 3 marine committee meeting at Marina Park.

Long Beach’s Alamitos Bay was cited as a location where SUP users are effectively educated, however commissioners pointed out only one company operates there.

Ken Williams has been operating a kayak rental business in Belmont Shore since 1992. He is also the owner of Standup Rentals and runs the SUP rental business out of two locations in Alamitos Bay.

Williams admits Alamitos Bay “does have a unique ability to control the safety factor in that it is a smaller marina.”

His SUP business has 100 boards, but Williams said they limit themselves on how many actually get rented.

“We only have about 10 to 30 SUPs out on the water at a time except for when a large group shows up. When we have large groups, it is guided and controlled…we have multiple instructors,” Williams said.

The SUP instructors go through a 27-page training manual and those renting SUPs are not “cut loose until they know how to paddle. They [the boaters] appreciate our people know how to paddle. Our paddlers don’t fall in the water, and they paddle efficiently,” Williams said.

According to Williams, first time paddlers renting an SUP in Alamitos Bay watch a three-minute safety video and demonstrate their ability to paddle before they go out on the water. Those returning to rent SUPs can enroll in a “speed pass system” by completing a written safety quiz. The incentives to do this are cheaper rental fees and not having to wait in line for future use.

“Now granted, their situation is a little different, because they are the only SUP rental operation facility in Alamitos Bay,” a Newport Beach Harbor Commission member stated. “The certification process actually helps the SUP business in Alamitos Bay.”

Joe Picarelli, a boater in Alamitos Bay, feels SUPs are still an issue especially when it comes to not following the rules of the road.

“SUP rental companies should have laminated instructions stating ‘stay to the right’ on the paddleboard itself,” Picarelli proclaimed.

Williams also said he periodically meets with the local homeowners association in the bay to address any concerns. At one meeting it was requested those entering the canals in Naples Island paddle in a counter clockwise direction. The direction is mentioned in the instructional video.

Williams said his business has instructors and a rescue chase boat monitoring the waterways. He claims there are no issues and there has never been an accident with his SUP rental business.

“Alamitos Bay is the perfect marina for [SUPs]. Although there is six miles of waterway, you are not far from safety. There is very little boat traffic in this corner [of the bay], because the boats cannot go under the Second Street bridge,” Williams said. “The SUP numbers really haven’t been a concern; the kayak numbers are generally more of a concern.”

The writer of this article admits to a near miss with a big boat while on a personally owned kayak in Alamitos Bay. Although this writer regularly paddled around the bay and through the canals, there was one instance where she lied back to rest on the kayak as it floated on the water between Naples and the peninsula. Her kayak eventually drifted in front of a cruising yacht. The captain blared the horn as the kayak bobbed in the path of the moving vessel, causing her to quickly sit up and paddle away.

“Many recreational waterway users aren’t aware of the dangers of deep draft vessels (such as their size, speed, turning radius, and thruster configurations), and many more do not know or follow the navigational rules of the road,” an entry on the American Canoe Association (ACA) website stated.

The sport of SUPs and kayaking does not appear to be going away.

“Some sports come and go – like rollerblading and windsurfing are gone. Kayaking is not going away, and I am super confident that SUPs are going to continue to grow,” Williams deduced.