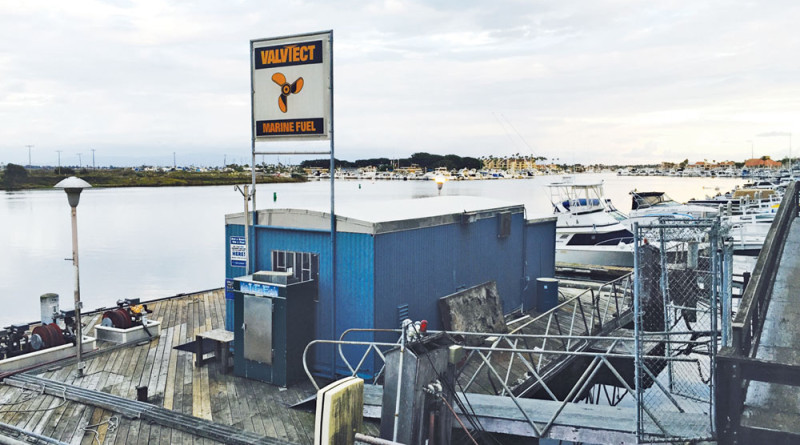 Thousands of boaters at Orange County’s northernmost marina will have to travel to other harbors to fill up their vessels after Huntington Beach officials attempted to keep the fuel dock open. The dock’s owners — Center City Properties and Nahas Enterprises — carried through on a plan to close the fueling station by Oct. 1; city officials stated pending solutions were in play but a feasible plan was not executed in time.

City officials recently became a player in the Huntington Harbour fuel dock saga after word came out the owners of Mariner’s Point fuel dock would shut down the station. The Huntington Beach City Council assumed an active role in preserving the harbor’s only fuel dock on Sept. 21. All seven elected officials supported a recommendation of Huntington Beach and Orange County partnering together to assume ownership of the fuel dock.

City Hall issued a statement Sept. 23 informing boaters all options to ensure Huntington Harbour does not lose its fuel dock were on the table.

Boaters were notified one week later of the fuel dock’s closure.

“As of Oct. 1, the Mariner’s Point Fuel Dock in Huntington Harbour closed,” a city-issued statement read. “This is not the outcome the city hoped for as our elected officials and staff worked diligently over the last several months to come up with an acceptable plan to keep the docks open. Needless to say, we are very disappointed with this unfortunate outcome as pending solutions were in action.”

Huntington Beach retained an environmental law firm to negotiate keeping the fuel dock open beyond Oct. 1; city officials also issued a Request for Qualifications on Sept. 29 to find a new operator. Council members held a closed session meeting Oct. 5 to discuss property negotiations. An environmental attorney was also retained to guide the city’s future action and prevent the dock’s previous ownership group “from abandoning and/or closing the fuel dock facilities in a manner that is not in compliance with very stringent environmental law, thereby creating a potential hazardous situation for the community and harbour,” according to a published statement.

“It is the city’s desire to have the fuel docks remain open while these additional efforts can be pursued,” Huntington Beach’s formal statement read. “While operating a fuel dock has never been a city function, it is clear the city will have to take stronger action in order to continue providing for the use of a fuel dock by the community and public safety users. The city is aggressively pursuing other options that are proving to be very promising for the long-term outlook of the fuel docks.”

Huntington Harbour’s boaters found out in July the fuel dock’s ownership group planned to shut down Mariner’s Point by Oct. 1. Local boaters and residents expressed concern of losing the marina’s only fueling station. Boaters would have to navigate several miles out of the way to fill up at Alamitos Bay Marina, Newport Harbor or San Pedro/Wilmington. Residents argued the loss of area’s only fuel dock would result in diminished home values.

City Hall announced in August it would help find a solution despite the fuel dock’s position as a private entity. Council members directed City Manager Fred Wilson to look into partnering with county officials to purchase and operate the dock.

A check of county records indicated no permits were filed to decommission the dock or fill the fuel tanks.

The Sheriff’s Department uses the fuel dock daily to fill up the three boats in its Harbor Patrol fleet, according to Wilson. Navy vessels also use the fuel dock.