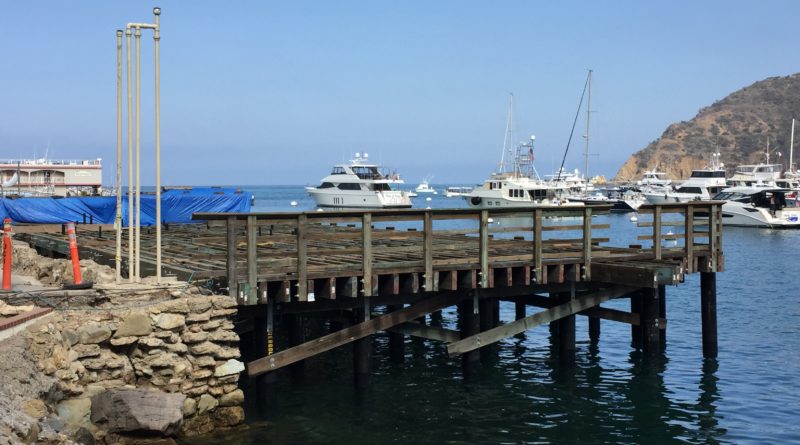 City of Avalon is contemplating a food truck on the fuel dock.

AVALON — After receiving only one proposition by the April 14 Request for Proposals (RFP) deadline, the City Council of Avalon is considering short-term and long-term strategies for a fuel dock establishment. One possibility brought up at the May 2 City Council meeting: installing a food truck or stand at the fuel dock until a long-term solution can be found.

The RFP received by the city was from Russ and Jenny Armstrong, the current owners of Portofino and previous owners of the fuel dock restaurant, Casino Dock Café.

“We only received one response that was not responsive to the conditions of the RFP, so that was the Armstrongs’ reply in the RFP,” City Manager David Jinkens reported to the City Council. “In that, they replied and expressed an interest in pursuing operation of a facility but not on the terms outlined in the RFP.

“A lack of response indicates that businesses, at least locally or at least those that we’ve spoken with… [are] not in the position to build a facility…so we are bringing this back to you and we’re suggesting that there might be some options that you want us to pursue,” Jinkens continued.

Some of the short-term and long-term suggestions made to the City Council included consideration of a larger facility to generate more revenue as well as a portable food facility.

City Council member Joe Sampson recommended the City Council pursue the Armstrongs, since they were the only ones “interested enough to submit an RFP.”

Mayor Ann Marshall pointed out this would require the city to construct the building.

“If the building had been built by the city, based on what we’ve been told, we would have gotten more responses to the RFP,” Scott Campbell, Avalon’s City Attorney, interjected.

The city should construct the building, Sampson proclaimed.

“I know we don’t have the money to do it, but we have to find it. We are going to get our money back within five or six years maybe,” Sampson asserted at the meeting.

Jinkens also shared the feedback he has received from various parties about wanting a rooftop facility.

City Council member Richard Hernandez indicated how changing the design of the building will require going back to the Coastal Commission, which ultimately will delay the process for another year.

Soon after this meeting, the Armstrongs received a correspondence from the city manager as directed by the City Council.

The City Council is giving the Armstrongs the first opportunity to “install one or two temporary portable food serving facilities.”

The city also specified the desire to have further discussions with the Armstrongs as well as other parties to find out exactly what kind of building would be needed “in order to make a restaurant successful for the City and profitable for the business.”

Changing the design of the building, the city pointed out, would require further approvals and delay the process for another possible two years.

After having been a “good” tenant for 18 years, having put all the effort into the RFP and having been the only one to submit an RFP, the Armstrongs are feeling frustrated.

“Truthfully, it’s very unusual the way this whole thing has transpired,” Russ Armstrong told The Log. “We just find it extremely peculiar that they bring up other parties that are interested and that they’ve been talking to other parties. These other parties didn’t respond to the RFP.”

Russ Armstrong did indicate there was one councilmember, but only one, who suggested the city sit down and work something out with the Armstrongs as they were the only party to submit an RFP.

“That’s the way it should be,” Russ Armstrong stated. “Essentially, we want to work with the city, but we are not interested in looking at something for one season or for two seasons. I don’t want to spin my wheels, if they want us to do something for them for two years, [while] they’re going to be talking to other folks in the background. We are extremely frustrated.”

The Armstrongs have until May 20 to respond to the city. They have every intention of responding, but are still contemplating on what to do at this point.

The City Council has yet to agree on financing the construction of the building.