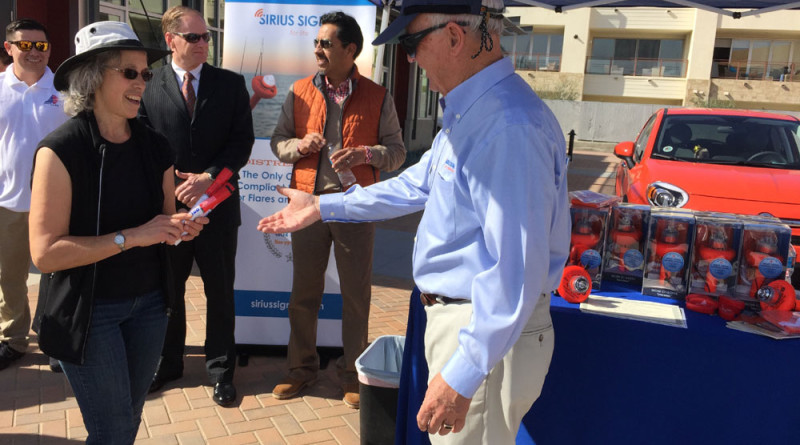 Marina tenants exchanged their old or expired marine flares for a free Sirius Signal Electronic Flare SOS Distress Light during a launch event on Jan. 21 and throughout the Sunroad Boat Show that ran Jan. 21-24.

The Coast Guard-compliant distress light does not have an expiration date, has a lifespan of 10,000 hours, can bee seen within a 10-mile radius and remains lit for more than six consecutive hours with a fresh set of C batteries.

“We are proud to be the first flare-free marina in the United States. The new Sirius Signal electronic flare is aligned with our mission to enhance boater safety and protect our environment,” Kit Sparks, chief operating officer at Intrepid Landing Marina, said in a statement.

The marina took the No-Flare Pledge last year and worked with its tenants to dispose of old or expired pyrotechnic marine flares.

Nancy Ratner, who keeps her sailboat at Intrepid Landing Marina, was one of the tenants to exchange her old pyrotechnic flares for the SOS Distress Light. She said the electronic flare could prove useful for man-overboard situations and is a good alternative in general.

“It’d be great for more people to use this,” said Ratner. “What are you going to do with those flares once they expire?”

Marina manager Max Maher said the partnership between Intrepid Landing and Sirius Signal took several months to develop. Boaters at Intrepid Landing Marina are slowly but surely coming around to switch out their old pyrotechnic flares for the SOS Distress Light.

“I’m hoping everyone jumps on the bandwagon. What convinced me is it’s great for the environment,” Maher said. “It’s a no-brainer. I’m a fisherman. The less the water is polluted, the better it is for everybody.”

A BoatUS blog stated expired or old pyrotechnic flares could be damaging to the environment.

“There really is a reason for those expiration dates. These devices use a variety of chemicals, all of which can deteriorate over time, either limiting burn time or altitude, or causing the device to fail altogether,” the blog post read. “We found expired hand-held flares that were very hard to ignite or didn’t seem to burn as brightly as they should, and meteor flares that didn’t fly as high or burn as long as advertised claims. A few failed to fire at all. Expired pyrotechnic devices are good for backup. Just don’t depend on them.”

The blog can be viewed at boatus.com/boattech/articles/pyrotechnics.asp.

More information about the electronic flare is available at siriussignal.com.