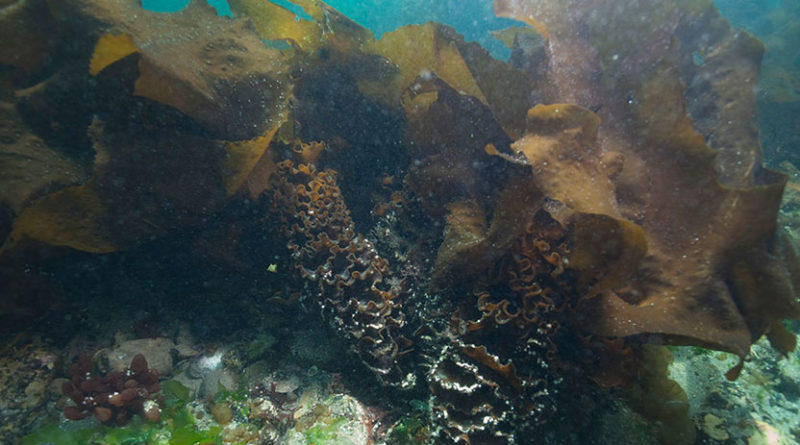 Undaria pinnatifida, an alga also known as wakame and found in miso soup, is native to Asia and was initially discovered in June 2016.

“Since its initial discovery in June 2016, the invasive seaweed has spread along the entire north coast of the islet, prompting the need for public awareness and support to reduce its spread,” a National Park Service spokesperson stated.

“Unlike Sargassum horneri, another recently introduced invasive alga, which spreads rapidly due to air bladders that allow it to float in currents, Undaria spreads slowly, unless assisted by transport on boat hulls or by other means,” the National Park Service spokesperson stated. “Now that Undaria has been established, biologists are seriously concerned about its rate of spread increasing. The cold waters at the islands are optimal for its growth.

“Due to its pattern of quick growth and its large size, Undaria may compete with native seaweeds for space and light and, as a result, may impact the marine ecosystem,” the spokesperson continued.

National Park Service staff stated boaters are essential to defending against the spread of Undaria/wakame.

“Boaters are the first and best line of defense in limiting Undaria’s rate of spread since eradication efforts are not considered a viable option,” National Park Service’s spokesperson stated. “They can do so by regularly checking their vessel hulls, fishing gear and nets, moorings, lines, docks, and other structures, especially before leaving the harbor to visit the Channel Islands.”

National Park Service also stated boaters can remove wakame by grasping it near the holdfast or pulling it off like a root and then tossing it into the trash.

“It should not be discarded in the marine environment, as it could release spores that can remain dormant in a microscopic stage for up to two years,” the National Park Service spokesperson said.

“Mature individuals have a frilly reproductive structure called a sporophyll at the bottom of the stipe,” a National Park Service spokesperson stated. “Undaria reproduces in the winter and spring. To monitor its presence, boaters can keep a special eye out for it attaching to the stern of their vessels or other areas of the hull that are less exposed to high water movement.”