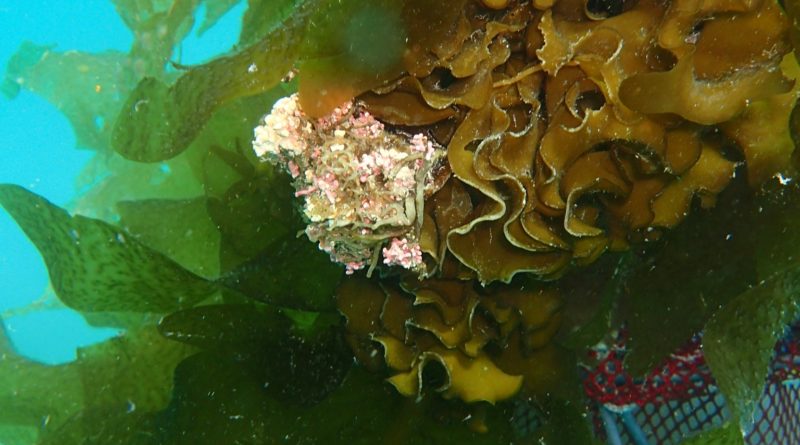 SANTA BARBARA—Algae and invasive species have certainly been a major theme in the lives of boaters all over Southern California this past year. Boaters in Santa Barbara have received their fair share as well. The Santa Barbara Harbor Commission entertained a presentation by National Oceanic and Atmospheric Administration (NOAA) concerning the findings of Japanese kelp called Undaria pinnatifida.

Undaria pinnatifida, most commonly called wakame, is an ingredient found in Japanese cuisine like miso soup and seaweed salad. Wakame has been found in Santa Barbara’s marina since the early 2000s. Dr. Lindsay Marks, a representative for NOAA via Channel Islands National Marine Sanctuary, stated, at the Feb. 21 Santa Barbara Harbor Commission meeting, she believed the kelp had spread to Santa Barbara Harbor by boat.

Wakame in the harbor spreads to areas randomly and unlike some other species of seaweed and kelp, has a tendency to sink so it is not always easy to spot or clear away. This lead the NOAA team to believe wakame may have attached itself to the hull of a vessel that travels more frequently such as one of the fishing boats. The spores from the wakame, which allows it to reproduce, are also microscopic in size; this makes the eradication process very difficult since there has not been a successful method to clean the spores from the waters – however, that’s in the works.

“There are certain hotspots in the harbor. It’s really not distributed evenly,” said Marks.

Marina 1 and the mouth of the marina, near Marina 4, appear to be the hot spot locations.

According to Marks, the kelp has also been found near the Channel Islands including Catalina.

A problem or not?

Marks called the Harbor Commission to offer any insight into studying the kelp including helping raise awareness of the way wakame is transported to the marina.

Marks mentioned some species could become naturalized, meaning they will adjust and become a part of the ecosystem they invade with limited problems. There are a few cases where invasive species can become more problematic, taking away food or other resources needed for local species to thrive.

Commissioner Betsy Cramer asked whether or not the issue of the wakame was severe and Marks cited Brazil and New Zealand as places where Undaria caused problems.

On the official website for New Zealand’s Department of Conservation, it stated: “The pest seaweed Undaria is a threat to Fiordland’s marine environment with its ability to quickly establish and outcompete native marina species.”

The Department of Conservation also stated it is “a threat to Fiordland’s unique marine environment and the fishing and tourism economies it supports.”

While wakame has been studied several years in Southern California, there is still not a definitive answer as to whether it will or will not cause harm to these waters’ unique marine life.

Some surveys had been completed over the years, but the technology for learning more about this species has come a long way.

“We were operating in the blind. The science was not nearly as sophisticated as it is now,” said Harbor Resources Manager Mick Kronman.

“Our role at this time is we’re here to help NOAA with any kind of investigation they need to do with this invasive plant,” continued Kronman.

Commissioner Jim Sloan also said it may be worth educating divers about Undaria in preparation for the harbor’s clean sweep event or investigating the effects of anti-fouling paints on the species.

As with many other problems boaters have faced from invasive species, such as zebra and quagga mussels, NOAA hopes to bring awareness to the problem in case it may worsen or have a negative impact in the future.

“The most bang for your buck is to prevent reintroduction and spread,” said Marks.

Marks further shared NOAA is taking measures to continue studying wakame, including monitoring it through surveys, research, outreach with boaters and trying to control it. Heat treatment and UV light are currently in development as ways to possible combat wakame.