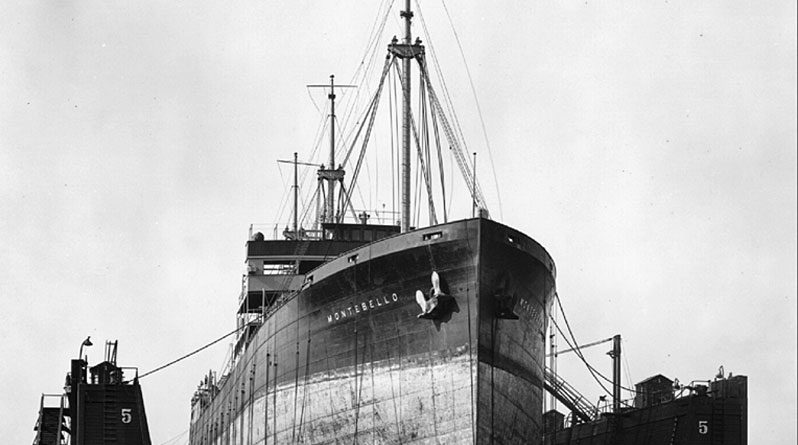 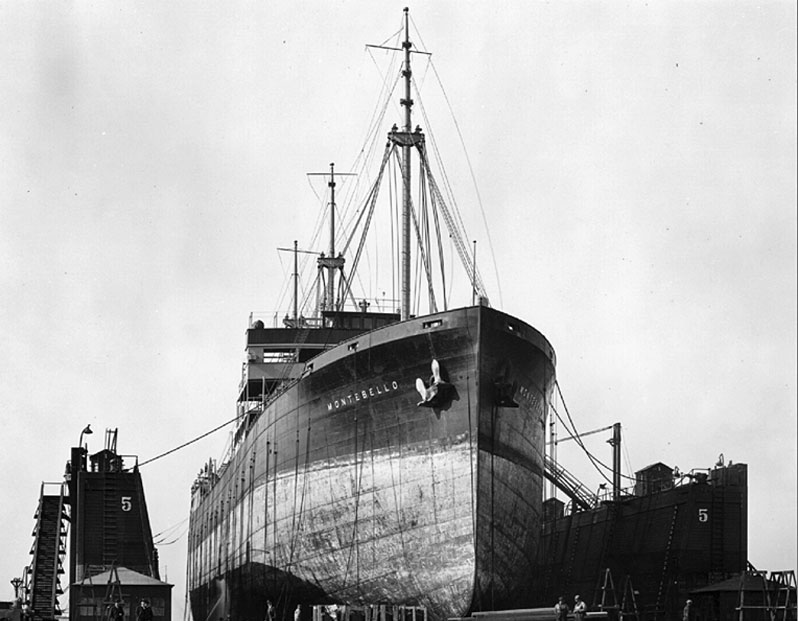 A 440-foot tanker torpedoed by a World War II Japanese submarine off the California coast with millions of gallons of oil aboard — long thought to be an environmental disaster waiting to happen — may, in fact, be empty, according to a new study. But however reassuring that new scientific assessment may be, many boaters still have their doubts.

Montebello currently lies in 900 feet of water, 6 miles off the coast of Cambria — about halfway between Los Angeles and Santa Cruz. For decades, authorities believed the slowly corroding tanker still held its original cargo of more than 3 million gallons of crude oil and 100,000 gallons of fuel oil. If, or when, rust finally breaches the ship’s holding tanks, a major oil spill could occur that could foul beaches and boat hulls for decades to come.

Over the years, images sent back by remote operating vehicles (ROVs) have shown the vessel still intact on the ocean floor and not visibly leaking or seeping oil, leading authorities to conclude that the oil remains inside the tanker. For years, the California Department of Fish and Game (DFG) Office of Spill Prevention and Response (OSPR) has listed Montebello as the state’s most serious shipwreck oil threat — but that may change when results of a recent inspection are made public later this year.

Sinking Shrouded in Controversy, Mystery
On the afternoon of Dec. 22, 1941, just two weeks after the Japanese attack on Pearl Harbor, workers at the Union Oil Co. facility in Port San Luis began loading Montebello with 3,089,982 gallons of Santa Maria crude oil, 104,034 gallons of bunker fuel and an unknown quantity of lubricating oil, bound for a refinery in Canada.

Just before the vessel was to leave port, shortly after midnight Dec. 23, Capt. Mogens Andreasen heard radio reports of Japanese submarine sightings in the vicinity. Fearing for the safety of his vessel and crew, Andreasen refused to sail. He was forced to resign his post and left the ship.

Montebello’s First Mate Olof Ekstrom took command and set sail at approximately 1:30 a.m. At about 3:30 a.m., reports came in that the tanker Larry Doheny had been fired upon, due north of Montebello’s position.

Despite the fact that Montebello’s heading would place the tanker in the same area as the Larry Doheny attack, Ekstrom stayed the course. He ordered all hands to don life jackets and report to their stations.

Hours later, as dawn broke, Montebello lookouts Richard Quincy and William Srez spotted a submarine trailing the tanker. The Japanese submarine I-21 repositioned itself on Montebello’s starboard quarter — and at 6:05 a.m., it fired a single torpedo that struck the tanker near the bow.

Ekstrom gave orders to abandon ship, and all 38 crewmen climbed into four lifeboats and rowed away from the stricken tanker. The submarine opened fire with its deck gun briefly before submerging, to avoid approaching reconnaissance aircraft.

Despite its volatile cargo, the badly damaged Montebello did not explode. But less than an hour later, the tanker’s stern rose 150 feet into the air and the vessel slid beneath the waves. The crew rowed toward the mainland and made landfall six hours later in Cambria, where local residents helped them ashore. No significant injuries were reported.

Reports of the sinking quickly hit the United Press newswire. But federal authorities, fearing citizen hysteria that Japanese forces had gotten so close to the highly populated California coast, immediately quashed the story and seized newspapers in San Francisco, as well as in Michigan and Texas.

Official information regarding the Montebello sinking was kept from the public until the 1960s.

Oil Entombed
The Montebello sinking was largely forgotten until 1996, when members of the Central Coast Maritime Museum Association considered memorializing the event by nominating the shipwreck for inclusion on the National Register of Historic Places. A scientific survey was launched in 1996 and with help from local commercial fishermen who had lost nets on the site, a probable target was found.

A small submarine launched off the research vessel Cavalier located the target and confirmed it was Montebello. Although a section of bow had broken off, the ship was resting perfectly upright and its tanks seemed completely intact.

Environmental experts pondered two likely scenarios. The oil had either escaped, or it was still entombed within the ship. At the time, principal investigator Jack Hunter concluded that most of Montebello’s cargo of Santa Maria crude oil was still entombed in the tanker.

In 2003, the Monterey Bay National Marine Sanctuary collaborated with archaeologists from California State Parks and the California Department of Transportation (Caltrans) to survey the wreck. “No reported oil discharge was observed during eight dives,” noted an observer, “but there were very large rust spots in the middle of each tank. She was finally starting to show her age.”

Given the wreck’s proximity to shore, it is unlikely that much oil could have escaped unnoticed, an OSPR-led task force concluded. By way of comparison, they pointed to the 1953 wreck of the tanker S.S. Jacob Luckenbach approximately 17 miles off San Francisco in 180 feet of water. The wreck, resulting from a collision with another ship, didn’t begin polluting until 1990, when some of the 475,000 gallons of oil on board began leaking.

Oil forensically traced to Jacob Luckenbach fouled the coast for decades. It polluted 4,000 square miles of ocean, killed 51,000 seabirds and eight sea otters, and impacted recreation, including boating and fishing for more than 10 years. In 2003, the Coast Guard spent more than $20 million to remove oil from the ship and seal it from future leaks.

Too Deep, Too Cold
Authorities at the time rightly feared that a spill from Montebello would dwarf that of Jacob Luckenbach. Oil might contaminate the Monterey Bay National Marine Sanctuary and could potentially threaten the cooling system of Pacific Gas & Electric Co.’s Diablo Canyon Nuclear Power Plant.

“On Oct. 21, 2008, a swarm of jellyfish covered the racks used to keep ocean creatures out of the water used to cool the reactors, forcing a partial shutdown,” a Montebello task force report stated. “There is no evidence that PG&E has a monitoring system to detect oil leaks near the plant.”

But some experts believed cold water at 900 feet was helping stave off disaster.

Coast Guard spokesman Adam Eggers told the Associated Press that the old and cold oil probably had the consistency of peanut butter.

“No one knows what 70-year-old oil does,” Eggers said. “It’s 40 degrees down there. Is it going to rise to the surface, warm up and liquefy, or is it going to be a rock?”

The Oil Vanished?
On Oct. 11, 2011, OSPR and the Coast Guard began another ROV assessment. For eight days, a tethered robot probed Montebello’s cargo and tank areas, collected sediment from the ocean floor nearby and retrieved tank samples. The information retrieved was analyzed, and a surprising conclusion was reached:

The oil had vanished!

“Our number one objective for this mission was to determine what threat, if any, the Montebello poses to the waters and shorelines of California,” said Coast Guard Capt. Roger Laferriere. “After careful evaluation of the data, we have concluded with a high level of confidence that there is no oil threat from the S.S. Montebello.”

NOAA scientists guessed that the oil had already entered the environment without being noticed. Using computer trajectory models based on a number of hypothetical release scenarios, they surmised that the oil may have already washed ashore in the form of tar balls or was somehow otherwise dispersed.

“Given the data discovered and records available, a long-term release model seems most reasonable,” said NOAA scientific support coordinator Jordan Stout. “Such a model indicates that most of the oil remained offshore and headed south, some would have evaporated within the first few days and the remainder may have washed ashore but may have been so widely scattered it went unnoticed. There are a number of unknowns associated with this release; therefore, we will probably never know exactly what happened to the oil.”

The recreational boating community may never know whether significant portions of 3,089,982 gallons of Santa Maria crude oil, 104,034 gallons of bunker fuel and an unknown quantity of lubricating oil carried aboard Montebello when it was torpedoed remain in the ship’s holds, or whether all of that simply “vanished.”

But if the Coast Guard and OSPR have it wrong and, in fact, all or part of Montebello’s millions of gallons of cargo remain entombed, the Golden State may well have a ticking environmental time bomb on its hands.

The Coast Guard intends to publish its final report sometime this spring. OSPR has not yet indicated whether it will delist Montebello as the state’s most serious shipwreck oil threat.