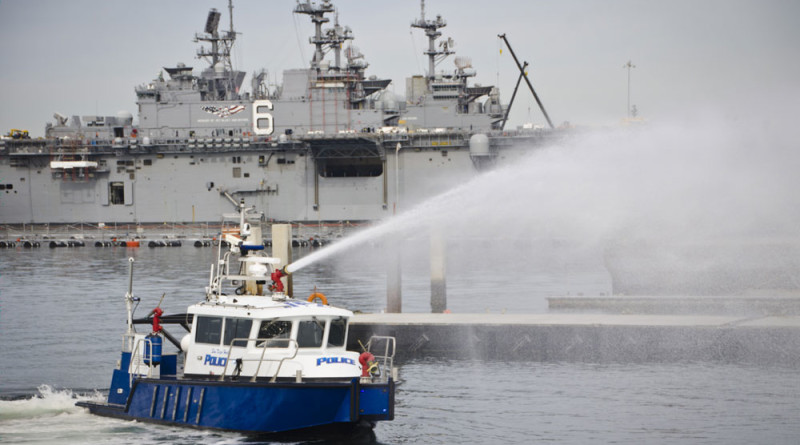 Recreational boaters are advised to keep an eye out for vessels operated by San Diego Harbor Police, the U.S. Coast Guard and the Navy as all entities share the bay.
Port of San Diego photo

SAN DIEGO — The southwestern-most city in the United States has a rich history when it comes to recreational boating. There are roughly as many marinas in San Diego as there are in the rest of Southern California combined. The Navy also has a major presence in San Diego as large naval carriers and cruisers dominate the waterfront.

It is not uncommon for recreational boaters and naval officials to cross paths in the bay as RIBs can be seen or heard piercing across the water at any given time; aircraft carriers come and go, and training exercises involving the Navy, U.S. Coast Guard and Harbor Police are quite common. How do recreational boaters co-exist with naval operations in San Diego Bay?

The presence of the Navy is quite conspicuous to anyone who navigates through San Diego Bay.

“Fortunately, the interference with naval operations, which requires Coast Guard or Harbor Police response, is not a routine event,” Cole said. “There is minimal direct interference between recreational boating traffic and U.S. Navy operations.”

Cole added all regatta or recreational boating events are vetted to ensure they do not interfere with planned naval operations.

“Any type of recreational race or regatta is required to submit an application to Coast Guard Sector San Diego for analysis and potential permitting,” Cole said. “Regardless of whether we permit the event or not, we vet their request to determine if there is potential for it to have an impact on planned naval events or movements. The San Diego Harbor Safety Committee is also a forum where the recreational community, the Coast Guard, and Navy Port Operations can discuss and mitigate any potential issues.

“I would argue the overall relationship is cordial and cooperative,” Cole continued.

“In nearly every instance of a planned training event that could have an impact on civilian/boater traffic, there is a discussion between all entities to ensure the commercial and recreational community is made aware and we make a determination on how to conduct that outreach effectively as well as a determination on how to maintain safety and command and control of the event area,” Cole said.

Cole added the Coast Guard and Harbor Police are mostly in charge of enforcing jurisdictional issues, though the military arm, “maintains a security and force protection posture at all of their facilities within San Diego Bay.”

San Diego Harbor Police Officer James Dreher said his agency monitors the entire bay up to 3 miles out and its jurisdiction overlaps with the U.S. Coast Guard and Navy.

He said all the agencies work together in dealing with the public, especially when someone appears to be interfering with naval operations and the Navy cannot immediately address the issue

“This happens more frequently than one may think,” Dreher said. “We are notified by the Navy if one of their security boats have someone who refuses to move out of a security zone or is interfering with their mission. We assist with educating or removing the problem so they can stay focused on their security perimeters.”

All three agencies also work together on missions and training, Dreher added.

“We work not only with the Navy, but the Coast Guard as well for specific missions, problems in the bay and even training,” he said. “We sometimes have training exercises where we are all involved. Our Harbor Police Dive Team train with Navy personnel and the Coast Guard goes out with us for certain patrol missions.

“Usually things flow very smoothly and we do not have many issues with interference from the public boater. If we do it is usually a navigational rule or state law/ordinance violation where we usually stop the individual and either educate them, leave them pamphlets of information or cite them if violation is serious enough.”

“Any specific operation conducted by the Navy or Coast Guard is usually broadcasted on VHF radio for all public to be aware and avoid the area depending on what the operation is,” Dreher said. “We are also always notified so our patrol boats can either assist them or help keep the area clear of boaters for their operation.”

The Harbor Police is generally responsible for enforcing state law, port or navigational codes, and Fish and Game regulations, according to Dreher. However educating the public on how boaters can co-exist with the various agencies navigating San Diego Bay is the top priority.

“We (Harbor Police) are generally the only ones who enforce state law, Fish and Game, Unified Port Codes, Harbor and Navigation codes and many others within San Diego Bay,” Dreher said. “Typically we are not out just wanting to issue citations. We more look into educating the public so we can make our waters safer. We can issue verbal warnings, written warnings, issue citations and arrest if needed. Most of the time we leave pamphlets or paperwork with information on boating so they can reference for learning more about safe boating.”

“It is my belief that the naval operations in San Diego bay and adjoining water is always within the international and inland Rules of the Road and beyond reproach. The problem is private boating,” Benscoter told The Log in an email. “It is the only mode of transportation that I know of where training and licensing for size and weight is not a requirement. Boating on San Diego Bay is akin to having 75 percent of the drivers on the road with no training and licensing. The difficulty with the Navy is not the Navy, it is the untrained boater that does not know or cares to know the Rules of the Road when it comes to operating a vessel.”

Of course not all interactions between recreational boaters and the Navy are negative or eventful.

Randy Sysol, a liveaboard at Pier 32 in National City, said he occasionally crosses paths with the Navy and its operations but otherwise exchanges are quiet to nonexistent.

“I have not had any experience with the Navy outside of the patrol boats they station around the shipyard and the carriers on Coronado,” Sysol said. “They sometimes make us hug the outside of the channel when passing by but nothing I would consider an issue. We’ve always had good experiences with them and the Coast Guard.”