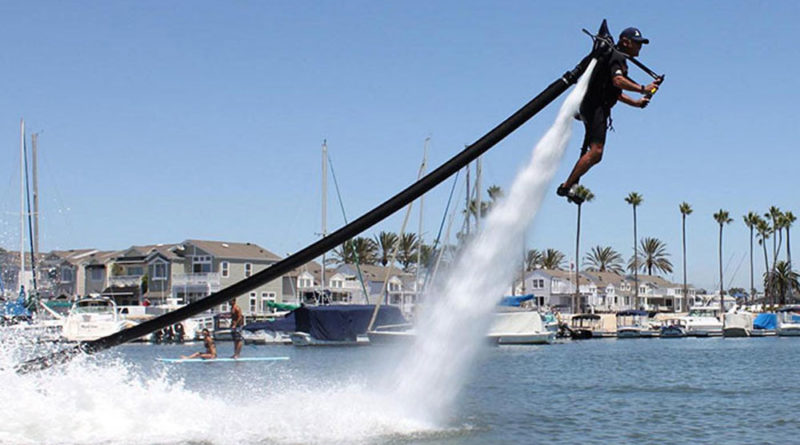 NEWPORT BEACH — Supporters of water-propelled vessels earned a major victory as the Newport Beach City Council finally approved an ordinance allowing jetpack operations in Newport Harbor. The approved permit was adopted June 23 and ended months of delays in the public process and haggling over where, if anywhere, jetpack operations should be allowed in the harbor.

Jetpack America will be permitted to operate its water-propelled vessel venture in Newport Harbor’s Turning Basin despite vocal opposition from a handful of residents.

Mayor Pro Tem Dianne Dixon and Council member Scott Peotter were the only votes against the ordinance, which cleared its second reading late last month.

Dixon, who initially supported the idea of jetpack operations during a council study session earlier this year, said she ultimately could not support water-propelled vessels anywhere in the harbor due to residents in her district complaining of noise and the Harbor Commission unanimously recommending against jetpacks in the bay.

“I respect the opinion and the studies of our Harbor Commission and the numerous residents who are impacted in the immediate vicinity [of jetpack operations],” Dixon said. “We continue to hear the same comments and the same descriptions of the noise and quality of life impacts.”

Indeed, most of the residents who spoke at the June 23 City Council meeting complained the jetpacks sounded like a vacuum and, in some situations, operated too close to homes.

“These jetpacks operate approximately 15 feet from our pier. It’s almost like they are right on our balconies,” said Craig Kennedy, president of Newport Towers Homeowners Association. “It’s something that should be done in the open ocean where there is plenty of room.

Newport Towers is an eight-story condominium adjacent to the Turning Basin and home to about 90 residents.

“According to several real estate brokers and agents, the jetpack operation will decrease nearby property values. Most people prefer a serene harbor view over an extreme sport spectacle,” Cole said. “While the promises of compliance by Jetpack America at the last council meeting may have been in earnest, the reality is they do not seem to be able to operate within the guidelines of the permit.”

Jetpack America, currently the only company permitted to operate water-propelled vessels in the harbor, has maintained its operation at the Turning Basin since May. Dean O’Malley, the company’s president, told council members he and his employees are making every effort to refine its operation and make improvements.

For example, O’Malley said he had a GPS unit installed on a pontoon boat used in all jetpack operations to ensure the user is staying within the permitted area.

“We have tightened up our scheduling process to ensure all flights finish before the 5 p.m. cutoff time,” O’Malley added. “We’ve added noise-dampening foam to the outside of our jet skis. The size of the operating area in the Turning Basin essentially drops the noise to zero for most points across the area.”

At least one person supported jetpack operations in Newport Harbor, but urged the council to allow two operators instead of one in order to foster competition and avoid perceptions of a government-endorsed monopoly.

The approved permit limits only one jetpack to be in the air at any given time; tandem operations, where an adult and child can fly with the same jetpack, are permitted. All jetpack users must observe the harbor’s 5 miles-per-hour speed limit. Under the current Marine Activities Permit (MAP), Jetpack America will be allowed to remain in the Turning Basin until Nov. 22. A new MAP could be awarded to Jetpack America or another company before the current permit expires.

Council member Marshall Duffield, who previously recused himself from each of the council’s deliberation of jetpacks, did not attend the June 23 council meeting.

The allowance of jetpacks in Newport Harbor has been a contentious affair since late last year. Harbor commissioners unanimously supported a recommendation last year to prohibit jetpacks from Newport Harbor. When the recommendation reached the City Council earlier this year, the seven-member elected panel unanimously agreed to look into how to allow jetpacks within the harbor, albeit with restrictions.

The unanimous vote evaporated in May when a split council sought to ban jetpacks in Newport Harbor. The pendulum swung back the other way, with enough council members supporting jetpacks in the harbor. An ordinance permitting jetpack use was adopted on first reading a few weeks ago; however, the ordinance’s second reading was delayed one meeting and finally taken up on June 23.