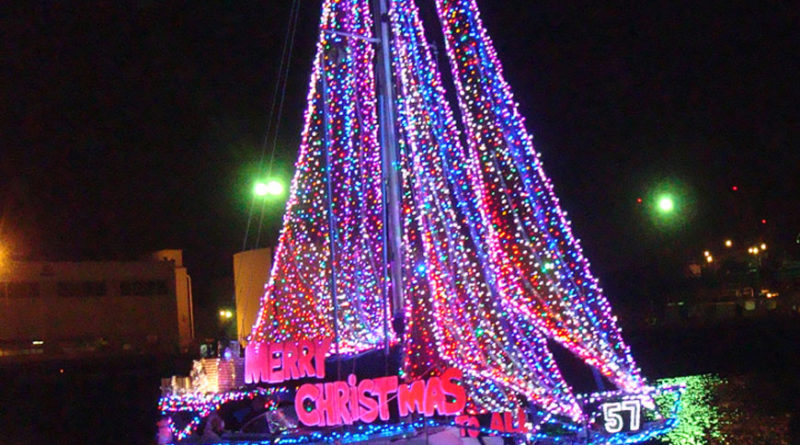 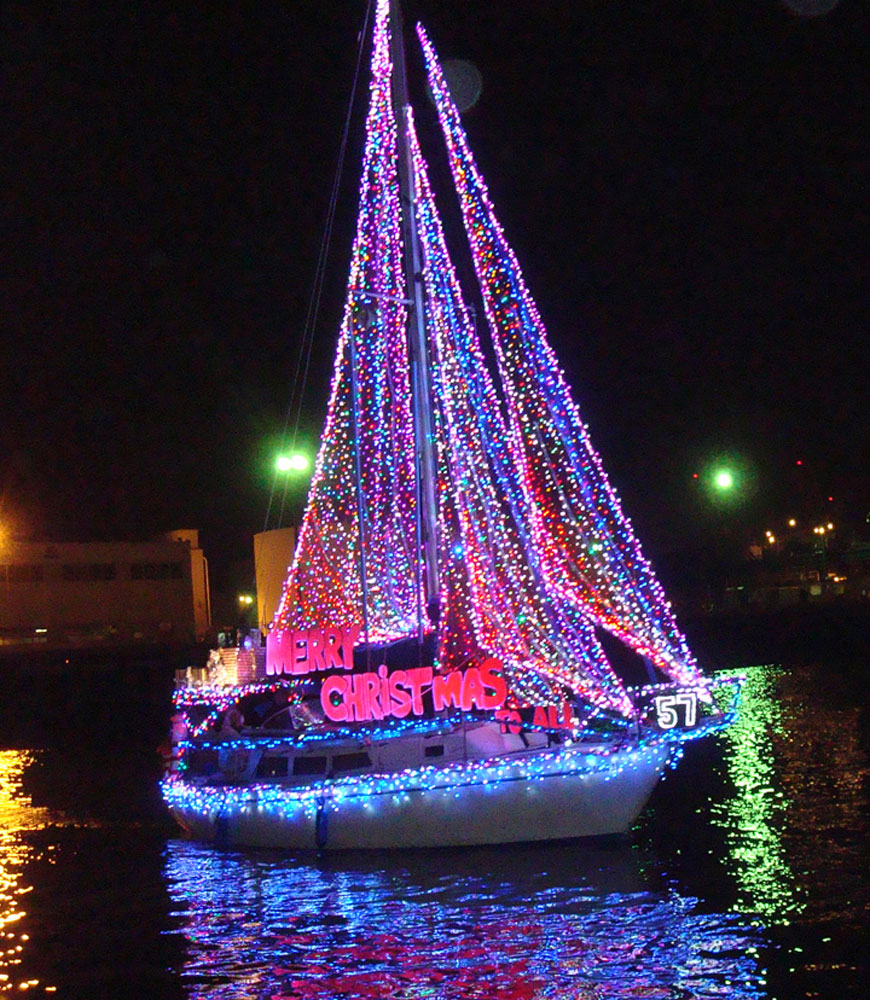 Participating in boat parades is a holiday tradition in Southern California — and some boaters spend all year making preparations for these harbor events. Bringing together the right holiday decorations, lights and onboard spirit to “wow” the crowds of fellow boaters on the water and spectators on shore takes planning and a lot of creativity.

However, even if you haven’t been working on your decorations since July, there’s still time to join in the fun of this month’s annual holiday boat parades. Grab some friends and family, and make your plan now to take part in one of the season’s top boating activities.

Details: continuing a long-standing San Diego tradition, the 43rd annual Parade of Lights will dazzle bayfront crowds as boaters will decorate their vessels to the theme “Children’s Stories on the Big Bay.” More than 10,000 residents and visitors are expected to come out to see the more than 80 lavishly decorated boats.

Route: Starting at 5:30 p.m. at the south end of Shelter Island, boats will cruise west past Harbor Island then south along the Embarcadero and Seaport Village before turning back north pass the Ferry Landing in Coronado. The parade takes about 2 hours to pass any given point.

Viewing: Boaters can get the best views where the parade turns west for Coronado, near the 10th Street Terminal. Shoreside spectators are advised to arrive early, since parking at Harbor Island is available on a first-come, first-served basis. Less crowded shoreside viewing areas include the north and south ends of the Embarcadero, the bayside pathway along Coronado and the waterfront park behind Seaport Village. The Maritime Museum of San Diego will host a holiday dinner event from 5-9 p.m. Dec. 14 and Dec. 21 aboard the vessel Berkeley, where viewers can enjoy a buffet and view the decorated boats up close. Tickets are $50 for adults, $25 for children and can be purchased at sdmaritime.org or by calling (619) 234-9153, ext. 101

Details: Thousands of spectators are expected to watch the boat parade at Mission Bay Park as dozens of decorated vessels will take to the water.

Viewing: Best shoreside viewing spots include Crown Point, the east side of Vacation Island and the west side of Fiesta Island.

Details: Hosted by Oceanside Yacht Club, this is the parade’s 38th year. Fishing boats, sailboats, kayaks and dinghies dresses up in holiday gear will circle Oceanside Harbor to enchant onlookers at the harbor, restaurants and the beach.

Details: The 40th annual Parade of Lights will carry the theme “Fantasea Holiday.” Boaters from throughout Orange County are expected to join the parade and compete for awards in a variety of categories. Additional related activities will include a Holiday in the Harbor Open House from 4:30-7:30 p.m. Dec. 5 at Mariner’s Village/Alley and Dana Wharf, Boat Rides with Santa Dec. 6 and 7 at Dana Wharf Sportfishing docks and Santa Paws from 10 a.m. to 3 p.m. at the El Torito Courtyard.

Route: The parade route will begin at the harbor entrance. Boats will head north to the Embarcadero and turn around, go right to East Marina, turn around at the bridge, exit and head along the outside of the harbor before heading into West Marina, turn around at the bridge and head back toward the starting point. Viewing: Anywhere in the harbor, for free. Reservations are required for viewing at local restaurants. Dana Wharf Sportfishing will offer parade-viewing boat rides. For reservations, call (949) 496-5794.

Details: Called “one of the top 10 holiday happenings in the nation” by the New York Times, the Newport Harbor Christmas Boat Parade will start nightly off Bay Island. This year’s theme is “Deck the Hulls with Bows of Jolly.” Fireworks, launched from the Balboa Pier, are scheduled at the end of the parade’s first and last night — beginning at 9 p.m. Dec. 17 and Dec. 21.

Viewing: The best shoreside viewing spots are around the Balboa Fun Zone, where spectators can also catch a glimpse of the harbor’s decorated homes. Reserved seating is offered at a variety of places along the harbor, including American Legion Yacht Club and the Newport Sea Base. Charter boat operators are also taking reservations for parade night cruises. Local traffic is heavy on all parade nights and parking is extremely limited, so it is wise to show up early.

Details: The theme for the 52nd annual parade is “Music in Paradise.” Boats of all sizes and types will participate. Boats will line up at 4:30 p.m. Route: The parade route will run down the main channel of the harbor and loop back at the fuel dock. The complete route, skippers’ information and additional details are available at hhboatparade.org. Viewing: Public beaches around the main channel edges of Trinidad, Humboldt and Davenport islands.

Details: The Huntington Harbour Philharmonic Committee will present the Cruise of Lights, its annual narrated holiday boat tour through Huntington Harbour, showcasing the area’s many decorated waterfront homes. The event raises funds for music education in Orange County. Tickets are $17 per adult and $10 per child age 2-12.

Details: The theme of the 68th annual boat parade is “Light up the Night” Streets will close at 5 p.m. on parade night. A skippers meeting for participants is scheduled for 7 p.m. Dec. 10 at Long Beach Yacht Club. Boats must have official parade numbers to participate.

Details: The 32nd annual boat parade is hosted by Shoreline Yacht Club, but club membership is not required to participate. Boat parade registration, however, is required.

Details: The theme of the 23rd annual King Harbor Holiday Boat Parade is “King Harbor Lights.” The Grand Marshal will be Fritz Coleman, comedian and NBC-4 weathercaster. All boats, stand-up paddleboards and outrigger canoes are welcome to participate, and decorated entries will compete for awards in a variety of categories. Proceeds from the parade will benefit the King Harbor Youth Foundation, Sea Scouts Ship 618 and a charity of the grand marshals’ choice.

Information: (310) 376-2459; khyc.org or khbf.org.   Marina del Rey Holiday Boat Parade When: Dec. 13, 6-8 p.m. Details: This year’s event marks the parade’s 52nd year complete with a fireworks show at 5:55 p.m., with the boat parade following immediately afterward. This year’s parade theme is “Happy Birthday, Marina del Rey.” Route: The parade will cruise through the main channel of the harbor and circle at least three times. The south turn will be parallel to Pacific Avenue in Marina del Rey and the jetty bridge in Playa del Rey. The north turn will be at the end of “F” Basin.

Details: More than 60 vessels will participate in the 52nd annual parade, which is set to the theme of “Holiday Treasures.” Gabriela Medina, field deputy for Councilman Joe Buscaino is the Grand Marshal. Boats of all sizes and types will participate, including tall ships, harbor workboats, recreational powerboats and sailboats. Pre-parade events are scheduled at 4 p.m. at the Banning’s Landing Community Center. A post-parade holiday program is planned at 8 p.m. at the Gateway Plaza Fanfare Fountain.

Route: The parade will begin at 6 p.m. in the Los Angeles Main Channel. The parade route will start at the East Basin near Banning’s Landing Community Center in Wilmington and will take approximately 90 minutes to proceed through the main channel. Viewing: Spectators can view the parade from Banning’s Landing Community Center, USS Iowa, the Los Angeles Maritime Museum, Ports O’Call Village,  SS Lane Victory and Cabrillo Marina, Holiday harbor Marina and Warehouse #1 and 22nd Street Landing.

Details: The theme of the 49th annual boat parade is “A Buccaneer’s Holiday.” Prior to the parade, a full day of activities is planned — starting with Snow Play at noon at Harborview Park, and a visit from Santa and Mrs. Claus along with crafts and food vendors and live entertainment. Santa is scheduled to fly across the sky, marking the start of the boat parade. Route: The parade begins in front of Peninsula Park and heads to the Main Channel, turns at Hobie Beach, loops in front of the launch ramp, and then heads back to Pacific Corinthian Yacht Club, where the route repeats for a second run.

Details: This year’s boat parade will celebrate the 38th anniversary of Ventura Harbor. The theme is “Holidays Around the World.” Prior to the parade, a Winter Wonderland and Holiday Marketplace is scheduled to take over Ventura Harbor Village from noon-5 p.m. It will include faux snowfall every 15 minutes, visits from Santa and Mrs. Claus, two live reindeer and carolers. A fireworks display is scheduled each night following the parade.

Route: Around the edge of the harbor near Spinnaker Drive. Viewing: Anywhere in the harbor around Spinnaker and Navigator drives. The best views are from the promenade, harbor view restaurants or the water. Ventura Boat Rentals and Island Packers will offer public cruises.

Details: While the boats hit the parade route — starting between Santa Barbara Yacht Club and East Beach — at 5:30 p.m., the festivities for the 29th annual event kick off at 3 p.m. at Santa’s Village on the City Pier in the harbor. Between 20 to 30 boats will be decorated for this year’s event. A short fireworks display is scheduled to follow the boat parade. The Santa Barbara Maritime Museum invites the public aboard the Channel Cat to enjoy a night of hors d’oeuvres and wine while viewing the parade from the water. More information can be found at sbmm.org.