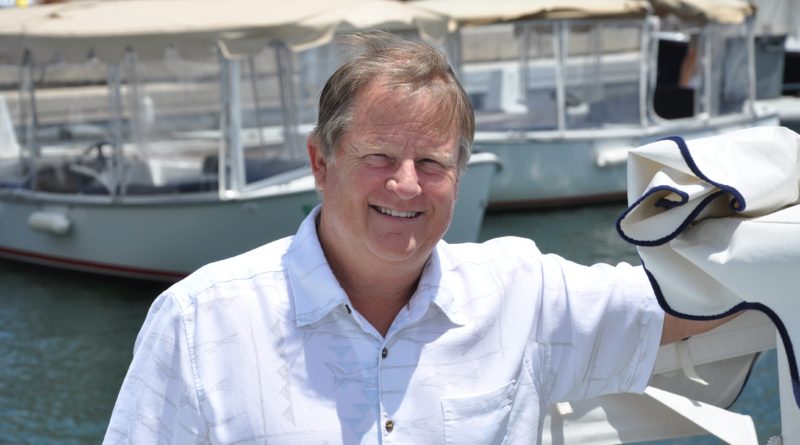 Inventor of the electric Duffy boat addresses his plans to improve the Newport Beach Harbor as city’s new mayor.

NEWPORT BEACH — In the efforts to track down Marshall “Duffy” Duffield, the new mayor of Newport Beach, it seemed quite ominous his reply to an email correspondence about scheduling an interview stated, “I’m around,” with his phone number attached.

The Duffy name is certainly “around” in many corners of Newport Beach Harbor, as it’s literally everywhere you turn – in the form of a “Duffy” electric boat.

As a long-time Newport Beach resident (more than 50 years) and the inventor of the electric boat bearing his name, many of us would consider Duffield the quintessential image of the dreamy Southern California yachting life.

A car insurance agent once told me we pay such catastrophic prices because “it’s a privilege to live” in Southern California. In a lot of ways, Duffield has taken such privilege and created an empire from it – him, and most other residents of California’s coast, live in a Technicolor world of scenic beauty that others across the country may never see in their lifetimes.

And Duffield remembers the earlier years of his life in Newport Beach fondly.

“Summers as a kid in the late 50s and early 60s was special,” Duffield told The Log in an email. “Growing up on the bayfront with my 14-foot dory with a 5.5 Evinrude outboard and racing my sabot was the best. I had a lot of great times waterskiing in the Back Bay too – wish that place was still open!”

Duffy is synonymous with Newport Beach. While we might think of the man who met John Wayne as a child and has been a mainstay in the boating world for decades, he’s also the man who is busy visiting his factory out in San Bernardino County the week leading up to Christmas and who has a hefty agenda to carry out that he’s already been planning and working toward.

“As a conservative I struggle with big government,” Duffield told The Log. “I’m all about doing it for less money, [with] fewer people and doing it quickly. Not everyone agrees with me on this but here’s an example. A week ago we opened a new dinghy dock next to Lido Village. It was sorely needed and is very nice, but it cost way too much money and took much too long to implement – crazy. I want to put expert experienced boaters in charge of running the harbor so we can do things at a reasonable cost and do it in a logical way.”

A mover and shaker, Duffield is a believer things shouldn’t be stalled. He feels one of the hardest parts of being a government official is working at the slower pace to get things done.

“I’m afraid I’ll run out of time to accomplish my goals because everything works so slowly in government,” Duffield said. “I’m not sure anything prepares you for this job, but my angle is simple: I’m going to just be Duffy. I plan on asking staff and the council for their advice. The council and city staff is full of high-quality, qualified people each with their own area of expertise and I want to use this resource to get through my year.”

However, Duffield still has a few initiatives mapped out.

“The Harbor Commission and the council will re-work Title 17 that spells out how the bay is run and managed. At the same time I’ll be leaning on our finance committee to find the funds for phase two of our new Harbor Operations,” Duffield said. “My goals for the harbor are to improve water quality by increasing circulation. Keeping the harbor dredged beyond the standard design depths and allowing the ocean to flow in from more than one place would be fantastic.

“We can accomplish this with smart and proven technologies. As I mentioned before we will operate and manage the harbor more efficiently,” Duffield continued.

In the past, the idea of replacing moorings in the harbor with “Duffy Docks” was tossed around and it seems like it could still be a possibility in the future.

“Multiple boat moorings are in use today with Harbor 20’s,” Duffy said. “It’s hard to justify one little 20-foot boat using a mooring where you could have stored several, so we came up with a way to make it happen. It has worked very well for more than a decade. I can’t see why we wouldn’t expand on this concept.”

One of the early wins for Duffield may be addressing the aging sea walls at Balboa.

“I am so happy that we are finally addressing this issue with a practical and affordable fix,” Duffield said. “Again, government works in mysterious ways but in this case, we are going to provide a solid answer to a very important problem. We’ve identified the parts that are severely in need of attention and are addressing them.

“We are increasing the height of the seawall that faces the storm surge and heavy winds with a cement cap averaging about 9 inches tall beginning soon,” Duffield continued.

Duffield also mentioned the possibility of opening up a second public anchorage.

“We brought [a second public anchorage] to the attention of the public at a Harbor Commission meeting many years ago,” Duffield stated. “The upper turning basin had boats on moorings in the 40s and 50s, so this is nothing new. A large amount of commercial operations are inches away from this basin. Public access is now available for local and visiting yachtsman on shore. The turning basin east of Lido Island is extremely congested on weekends and during the summer. Having two mooring fields will help create more open space on the bay.”

He also believes liveaboards can make positive contributions to the boating community.

“Liveaboards are great for the mooring fields,” Duffield said. “They keep theft down and are good ambassadors of the bay. It’s a hard life out there when you do it legally. That’s what needs to change. We must enforce the liveaboard rules.”

Of all the things he accomplished, what he’s still most proud of is keeping Duffy boats a household name in the boating industry for nearly 50 years.

“I’d have to say after thinking about it for a while that I’m proud to have kept a boat company in business for almost 50 years.” Duffield told The Log. “It doesn’t take a genius, but it does take perseverance and passion. We went through three major recessions, which takes its toll on boat builders. Selling something that nobody really needs and has limited use for is challenging to say the least. Our customers love the Duffy boating lifestyle and I’m proud to be a part of their good times on the water.”

A purveyor of the boating communities of Newport Beach’s Harbor, Duffield has much planned to improve one of the city’s greatest assets.

Duffield can be reached by email at dduffield@newportbeachca.gov.