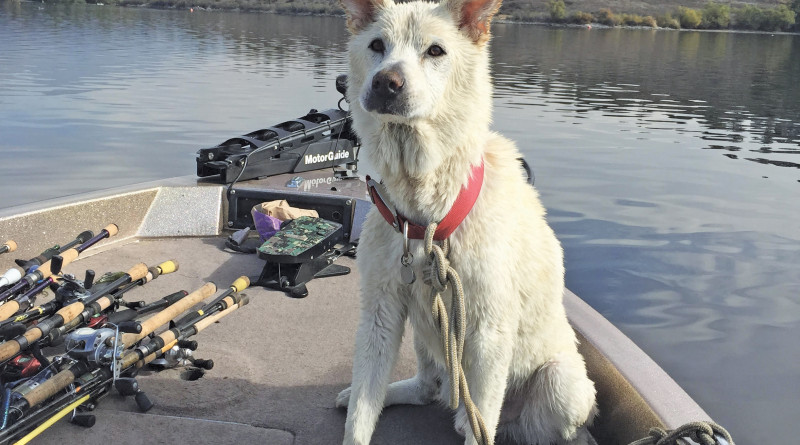 Kirby: A dog dedicated to fishing, boating and family

WHITTIER ― A dog named Kirby became a part of Louis and Eileen Lau’s family and not only fell in love with this family, he also fell in love with fishing and boating. Sadly, Kirby’s life came to an end due to cancer at the end of 2016, but he left quite an impression on the family and many great memories some of which are shared with The Log.

Louis Lau started bass fishing as a young boy at 10 years old. His hope was to one day have a truck, a Ranger bass boat and a fishing dog. “Thanks to Kirby my dream came true!” Louis exclaimed.

This dog’s dream came true as well. Eileen Lau discovered Kirby on a trip to a bank. He was abandoned and tied up in front of the bank. Kirby went from being homeless to having a home and family as well as enjoying many boating and fishing adventures.

So much so, whenever Louis Lau took the boat and truck out just to fill up the gas tanks at the gas station, Kirby would whine and bark assuming the boat was being taken to the lake without him. On one occasion, Kirby got out the gate and followed the truck hauling the boat for one-quarter of a mile. When Louis Lau arrived at the gas station and stepped out of his truck, Kirby was there waiting for him.

Kirby, a possible Korean Jindo mix, became quite the fishing dog. Every time Louis Lau had a fish on the line Kirby would get more excited than him. Kirby was so enthusiastic during fishing trips, it became a bit of a challenge to keep him on the boat.

While Louis Lau was fishing with Kirby at Castaic Lake one particular day, there was another bass boat close by throwing trout swim bait. Kirby loves trout swim bait and jumped off the boat to go after it. Kirby swam next to the other boat, and the anglers helped Kirby get on their boat.

“My dog is in another bass fisherman’s boat,” Louis Lau said amused, “and they are having a good time with Kirby.” The other fishermen were laughing saying they have never caught a dog while fishing until now.

Having been a part of the Lau’s family for 14 years, Kirby was very protective. He protected not just the family members, but also the house, the truck, the boat and even all of the fishing tackle in the garage.

The photo of Kirby attached with this article was taken at Puddingstone Lake. It was his last trip to the lake due to his cancer diagnosis.

On his final day surrounded by his beloved family, he looked at each family member as if to say good-bye.

“We love Kirby, and it’s time to remember all of the great times we had together,” Louis Lau said in his e-mail to The Log.