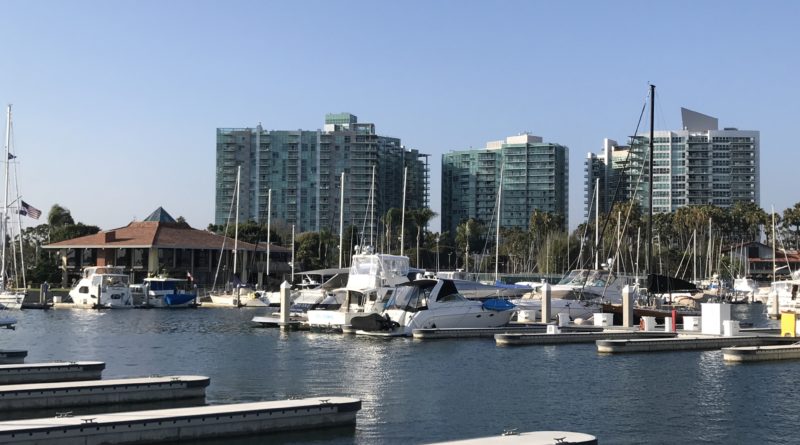 MARINA DEL REY — Los Angeles County could be looking into creating a bicycle lane of sorts in a stretch of Marina del Rey as the Small Craft Harbor Commission briefly broached the idea of a dedicated space for standup paddleboard, or SUP, users on the water.

The idea was brought up during a larger discussion on Parcel 43 construction at the commission’s July 12 meeting in Marina del Rey. New slips are being built at Parcel 32, which is located at Bali Way.

There have been concerns, in general, of the project’s encroachment into the main channel. Plans calling for an extended dock into common traffic areas could have an effect on charter operations and student sailing programs, some argued.

Commissioners did not come to any conclusions or recommendations about a possible standup paddleboard lane. Whether the topic is considered with greater interest at a future meeting remains to be seen.

“The paddleboarder population [is increasing] and, as I go down D Basin, it is very, very dangerous for them. I keep wanting to advise them, please move to the right,” Beale said. “It’ll be very easy to put half-a-dozen orange buoys down the side of D Basin and have them instructed to keep to the right of that.”

Beale said standup paddleboard users are a welcome addition to Marina del Rey, as they keep people on the water at Los Angeles County’s largest harbor. Adding a dedicated lane for them would bolster the county’s on-the-water safety efforts, Beale said.

At least one commissioner acknowledged the idea of a lane designation for standup paddleboard users should be discussed at some point – although such plans or discussions could be brought up at a later date, not necessarily in the context of Parcel 43’s redevelopment.

County staff stated any discussions of a lane designation for standup paddleboard users would have to include U.S. Coast Guard and Harbor Patrol officials.

The Parcel 43 project has been underway for some time now. However commissioners discussed the dock redevelopment at their June and July meetings due to its proximity within Marina del Rey Harbor’s main channel.

“There were some concerns about the fact that this project is going out into the channel. Some people were worried sailboats wouldn’t be able to turn around,” Michael Tripp of Department of Beaches and Harbors’ planning department told commissioners in June, adding redeveloped docks were designed to minimize the number of slips lost.

“By allowing [the docks] to go out the extra distance we were able to get some additional slips,” Tripp said, adding boats would still have about 600 feet in the channel to maneuver once Parcel 43 is complete.

Construction work began in November 2016 and would take about five years to complete, Tripp told commissioners in June. There are 301 slips currently under construction.