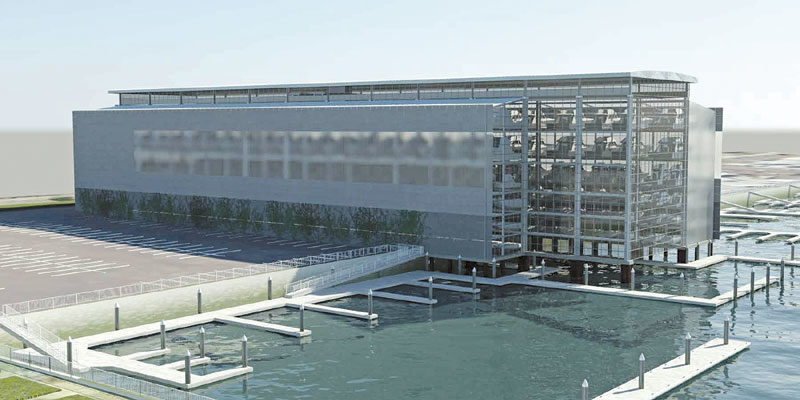 Boat Central development was set to move forward in 2016 before falling off the radar.

MARINA DEL REY—Plans to build a VIP boat valet service in Marina del Rey appeared to be in the works a few years ago – and then silence. It’s like being in touch with your crush and he or she commits to taking thing to the next level with you, and then he or she ghosts you entirely.

Boat Central, as the project was called, earned the most significant of its approvals in 2015. Little has happened since then: no groundbreaking, building or planning.

Benjamin Reznick, the attorney representing MDR Boat Central, said his client is not seeking to force the issue on the project, per se. Los Angeles County owns the land where the Boat Central project would be built (Parcel 52 at Fiji Way). The issue is how much money MDR Boat Central spent to pursue the dry dock boat storage project before county officials seemingly backed off.

County officials issued a Request for Proposals for the dry dock boat storage project and eventually awarded a contract to Reznick’s client, MDR Boat Central. Reznick, in a phone conversation with The Log, said MDR Boat Central was out $4 million – money spent on entitlements. The money had to be spent for MDR Boat Central to ultimately gain a 60-year lease from the county, according to Reznick.

Details of the lawsuit aren’t fully available yet, but the developer is seeking to recoup the money it lost in pursuing permits, entitlements and other approvals.

The Boat Central development team had been pursuing the dry dock boat storage project since 1991, with plans expanding in 2003. It would take 12 more years before MDR Boat Central earned the breakthrough it was seeking: approval by the California Coastal Commission.

County officials became involved with the project in 2016 – and that’s where the light at the end of the tunnel actually seemed to fade and dim, not appear closer or brighter.

Supervisors were set to vote on the project in 2016, but that year’s election changed the content of who sat on the dais, and it appeared as if MDR Boat Central did not have the votes to move forward.

A May 2018 report in The Log stated the county’s Small Craft Harbor Commission fielded complaints about the proposed dry dock boat storage project.

“The Small Craft Harbor Commission, after reviewing complaints and noting the cost for a storage space would be higher than a slip (hence conflicting with the intent of the project), struggled to get behind the project; only two commissioners of the five present voted to approve the lease,” Devon Warren-Kachelein, The Log’s staff writer in May 2018, wrote in her feature story about the status of Boat Central.

“Industry professionals viewed Boating Central’s size as being problematic and questioned its functionality; still others worried it would block safe access to the nearest boat launch ramp,” she continued in her story.

Warren-Kachelein quoted the county’s public information officer in her story, confirming no progress was being made on the project.

“At this point, there is no new project,” Nicole Mooradian, the PIO with L.A. County’s Department of Beaches and Harbors, told The Log in May 2018.

A lease for the Boat Central project never came through – and hopes for a high-tech venue for boat storage in Marina del Rey remains off the radar. The lawsuit filed by MDR Boat Central certainly won’t speed things up.

The Log is in the process of obtaining the complaint and will report on the allegations, as well as the county’s response, in the next issue of The Log (Jan. 24).

Cutting edge boat storage facilities are not common, but a few technologically savvy venues exist – including one in Fort Lauderdale and another one in Miami.