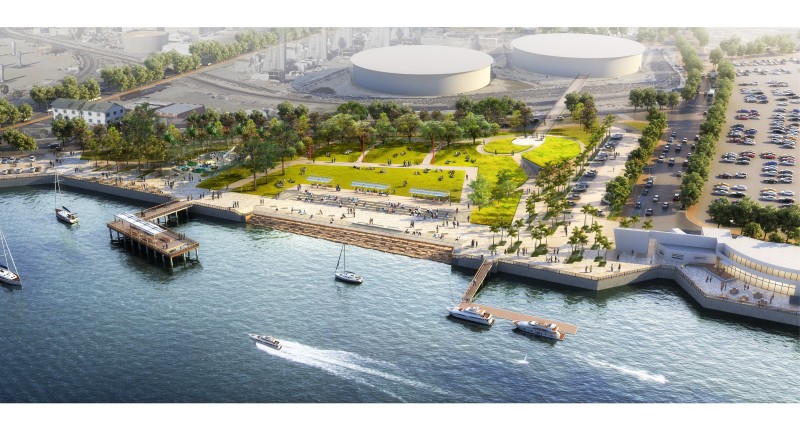 Port of L.A. presented design plans, which includes modifying a public dock, at a community workshop.

WILMINGTON — Nearly 50 people attended a workshop at the Banning’s Landing Community Center on March 30 to hear the latest updates on the Wilmington Waterfront Development Project. The conceptual plan proposes to reconstruct a dock for boaters and provide a community park with unobstructed views of and access to the water.

The design team said they are ready to start executing their plans on creating an “oasis,” but there is still an issue of ownership to overcome in order to move forward with redesigning the waterfront in Wilmington.

“We are in the moment of really finalizing design and moving towards implementation, and so ideally all that we’ve heard up until now has been channeled into the direction that I am about to share,” Gina Ford stated at the March 30 meeting.

Ford is the principal and architect for Sasaki, the landscape architecture firm tasked with designing the waterfront park in Wilmington.

“Some of the highlights [include] a 5,000-square-foot picnic pier that’s got an odd shape to enable different views, a 300-foot long what we call water steps (this is a terraced, sort of sculpture that gets all the way down to the water’s edge enabling lots of different kinds of sitting at the water’s edge), [as well as] relocation and reconstruction of a public access dock. These are a few examples of the ways we are thinking of getting people to the water’s edge,” Ford said.

However when The Log reached out to the Port of Los Angeles, port staff said the plans have yet to be finalized specifically in regards to the public dock.

“Our engineering team tells me that we are still evaluating the final use of the public dock,” Rachel Campbell, Media Relations Manager for the Port of Los Angeles, stated. “As it stands now, the plan calls for rebuilding the existing public landing, which is currently designed for passenger drop off and pick up (no slips). We are looking at expanding that use, but those options won’t be included in the final engineering drawings until later this year.”

Keith Ball, a Wilmington resident who has been attending the Wilmington Waterfront meetings for about 13 years, questioned whether the port district has possession of the land it seeks to redevelop.

“Does the port own all of the land that you are planning on developing on today?” Ball asked at the March 30 public meeting.

Los Angeles Department of Water and Power (LADWP) owns a portion of the waterfront property with the port owning the promenade, according to Director of Waterfront and Commercial Real Estate Mike Galvin.

“The port has been in discussions with [LADWP] for several years – more intensely in the last two years, but it’s critical that those discussions come to an end soon, and there is a resolution to how these properties are going to get worked out,” Galvin elaborated. “The conversations haven’t moved as quickly as we would like, and so we are engaging other levels of the Department of Water and Power as well as the mayor’s office and the council’s office to make sure that the parties make a decision and expedite the process as much as possible. We really need a resolution in the next six months to stay on schedule with this project.”

The Log reached out to the port and the response received correlated with Galvin’s.

Officials ultimately hoped to present the meeting’s attendees with a long-range plan for future waterfront development in Wilmington.

Donna Ethington, a liveaboard in Wilmington for 35 years, has been involved in this project having served on the Wilmington Waterfront Redevelopment subcommittee. She said the public dock at Banning’s Landing is 75 feet long but only offers users a 30-minute window for loading or unloading, limiting any ability to dock a boat.

She does have appreciation for the Wilmington Waterfront Development Plan.

“I love the design. I think it’s absolutely gorgeous,” Ethington told The Log, “However the thing that I’m looking at is it’s basically another park. There’s got to be something else to bring people down to this waterfront other than a park.”

Ethington did indicate the Wilmington Youth Sailing Center will draw people to the waterfront and will give purpose to the harbor.

The sailing center “will add some vitality and daily use to that waterfront,” Ethington said. “They already got the funds to build. I think it’s in 2020 when they will construct [the sailing center] after they finish the promenade.

However Ethington and other people from the community expressed how parking is going to be an issue at this location.

There cannot be “a regional draw in that small of an area with limited parking,” Ethington stated.

The design team did in fact discuss their vision of various events and festivals being held at this redeveloped waterfront park allowing up to 5,400 people with plans to add more parking.

There are currently less than a hundred parking spots, so the design team is looking at roughly doubling the capacity, according to Ford.

“We are spreading those [parking areas] out having two major lots on either side and then on-street parking, so that gets us up to almost 190 spaces which is growing the capacity and serving the park well,” Ford mentioned.

Ball also spoke up about the public’s interest in a more historic and nautical platform as well as a tower in the park and tall ship presence in the harbor.

The key issue remains; however, which is LADWP does in fact own part of the land where the development plans are being made.

“As it turns out the waterfront project can’t move forward without a deal with the DWP,” Ball said in an email to The Log.

Additional community outreach workshops are planned for this spring, summer and fall in regards to the Avalon Promenade and Gateway Design, which was previously called the Pedestrian Bridge Project.

The design ideas presented at the March 30 public workshop are available online at bit.ly/2ojYSL6.