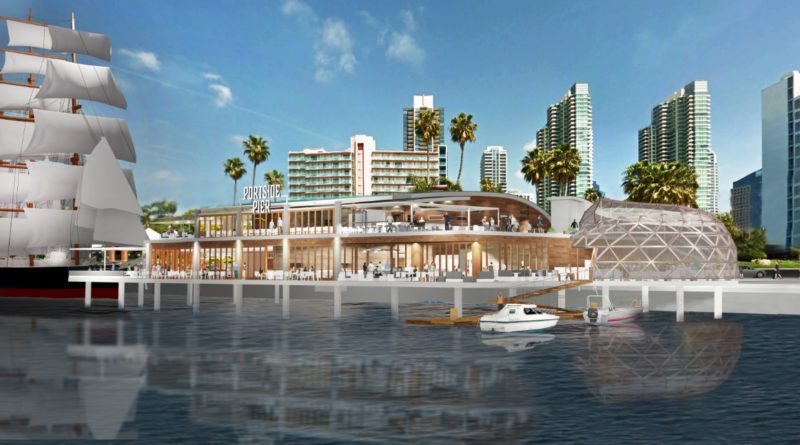 SAN DIEGO—Delays in construction are about as surprising as water being wet. Plans to bring a package of new restaurants to the former Anthony’s Fish Grotto location on the Downtown San Diego waterfront have endured delays. The Port of San Diego, accordingly, decided to amend the rent structure for the restaurant group bringing those (now delayed) plans to fruition.

The Brigantine’s plans to bring Portside Pier online caught a slight reprieve, Dec. 10, as the Port of San Diego’s Board of Port Commissioners agreed to retroactively modify its minimum annual rent agreement with the restauranteur.

The original lease agreement required The Brigantine to complete construction by Dec. 31; construction, however, won’t be completed until mid-2020.

“While Brigantine has been making a good faith effort to complete construction on schedule, there have been circumstances outside of their control that have delayed the expected completion until mid-2020,” port district staff stated in a report to commissioners.

Both parties entered into a 40-year lease on April 27, 2018. The Brigantine would build a group of restaurants where the old Anthony’s Fish Grotto used to stand (1360 North Harbor Drive in San Diego’s North Embarcadero district). Lease terms called for The Brigantine to complete construction of a $13 million restaurant redevelopment project.

“The Brigantine expects construction of Portside Pier to cost $20 million to create an enhanced dining establishment, including enhanced public improvements,” port district staff stated in a report to commissioners. “The redevelopment will include a two-story restaurant structure, new pilings and platform, an expanded dock-and-dine facility and promenade improvements.”

“All three public features will be maintained solely by Brigantine at no cost to the [port] district,” port district staff stated in their report to commissioners.

Antony’s Fish Grotto was one of San Diego’s longest standing seafood restaurants before it was recently demolished to make way for Portside Pier. The former restaurant operated on the Downtown San Diego waterfront since 1964, but its lease with the port district expired in January 2017. The port district and Anthony’s did not sign on to a new lease, opening the door for The Brigantine to come in and propose Portside Pier.