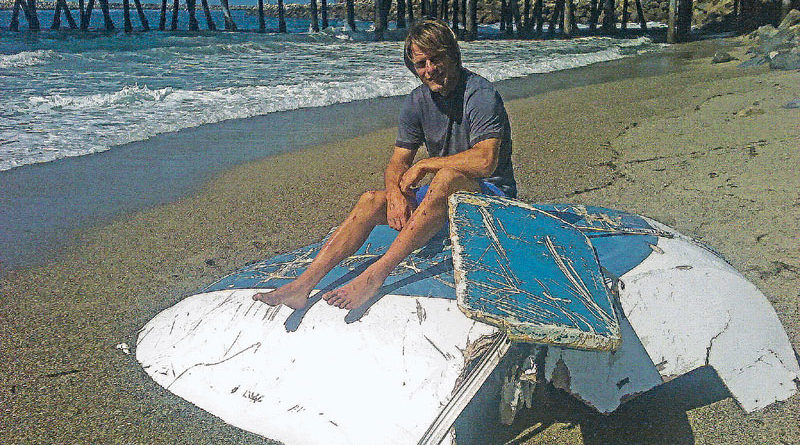 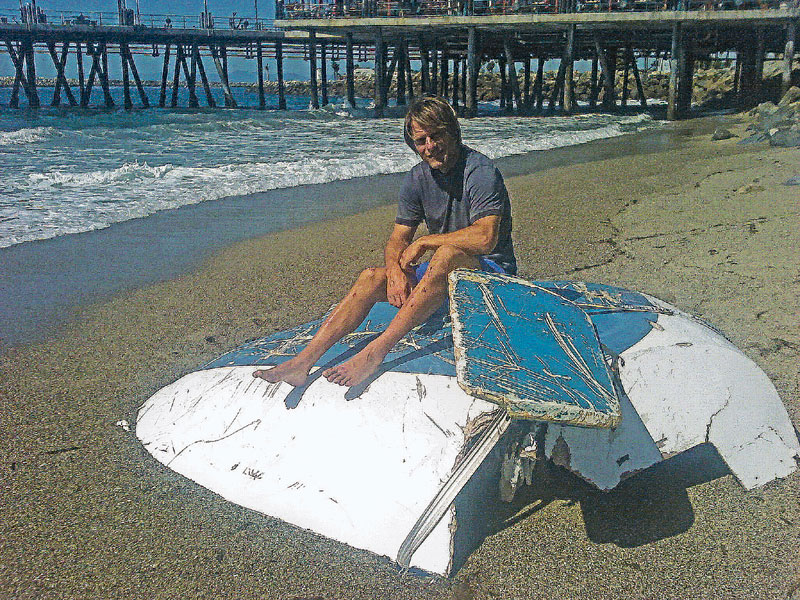 When Glenn started to enter the harbor, Chris Keenan, a retired El Toro Marine Corps Air Station firefighter who was watching from shore, noticed something was wrong.

“It was 6:30 in the evening on a Sunday, and he was the only boat out on the water,” said Keenan, a Redondo Beach resident. On his walk along the esplanade, Keenan kept an eye on the boat — and he turned around when he felt the boat was headed for trouble.

“I noticed his sails were just flapping in the wind, and he was stuck in that position. It looked like he was going to hit the south side of the pier — and there must have been 10- to 15-foot swells coming in,” Keenan said.

Glenn had been sailing alone since 9 a.m. He had been fighting the intense weather and trying to get around the Palos Verdes peninsula for hours.

“I was getting about a quarter-mile with each tack from Long Beach to Palos Verdes while motorsailing,” Glenn said. After getting past what he called a “minefield” of buoyed lobster hoop-nets around Palos Verdes, Glenn said the swells picked up to about 10 feet, and winds were at 22 to 26 knots.

Glenn changed course and headed for the King Harbor entrance, to get relief from the storm. Glenn said he had entered the harbor dozens of times before.

This time, as he neared the entrance, the boat came off the crest of a wave and the force caused the engine to stall, leaving Glenn with only the sails to maneuver the boat into the harbor.

“I tried to get the engine running again, but I couldn’t,” Glenn said. “I was about 30 yards from the harbor entrance; I was at a critical point when the engine cut out, and with the winds so strong, I couldn’t tack back out.”

At this point, the swells began pushing the boat up against the pier and in toward the rocky shoreline. Glenn knew he was in trouble, and he called the Marina del Rey Sheriff’s Marine Patrol from his cellphone.

“The mast of the boat must have missed the pier by 5 feet — and after that, I knew I was going into the jetty,” Glenn said.

On the shoreline, Keenan had watched the situation go from bad to worse, and he called the Redondo Beach Fire Department to report the situation. As he got around the pier, Keenan watched as the boat was 30 feet away from the rocks, then 10 feet, then 5 feet and then … impact.

A wave sent the boat against the rocks, but Glenn hoped the impact would give him the ability to turn the boat around and avoid further damage. Before he could get back on the lines, though, a second wave pounded the boat again. That was followed by a third wave that sent the boat horizontal and ejected Glenn from the cockpit, landing him up onto the rocks.

“I landed like a pancake on one of the jetty rocks, and watched the waves pull the boat back, and then toward me again,” Glenn said. “I knew that the boat was coming back — and if I stayed on that rock, I was going to get cut in half.”

With Keenan watching, Glenn let go of the rock just before the boat came back, crashing against the shoreline and breaking into multiple pieces.

“When he went into the water headfirst … it sounded like a garbage disposal when that boat hit the rocks, and I thought he was dead. But he happened to fall through an opening between the boat bottom and the rocks,” Keenan said.

Before the Marine Patrol or fire department personnel arrived, Keenan, 51, was down on the rocks with Glenn, talking him out of the water. The rescue-trained ex-firefighter knew better than to get in the water, with the rough conditions and lack of knowledge of how many survivors were on board when the vessel went under.

“I knew that if I went in the water, I could easily become a part of the scene, as well,” Keenan said.

Keenan continued to encourage Glenn through a few more crashing waves, and once Glenn was close enough, Keenan grabbed his hand and the back of his jacket, and pulled the exhausted sailor to safety.

With some cuts on his legs and an ankle injury, Glenn was taken to the hospital by the Redondo Beach Fire Department, where he was treated for those injuries and hypothermia.

“The first words he said to me after we got out of trouble were, ‘Thank you,’ and ‘Can I buy you a beer?’” Keenan said.

“I was a little in awe of the whole thing,” said Glenn, who lost his phone, wallet, ID card and money from the boat delivery in the incident. “The firefighters gave me a one-way taxi ride to Marina del Rey, and told me to get back to a bar and have a cold one, because I was lucky to be alive.”

Glenn, who has been sailing in Southern California for seven years, said there are lessons to come out of his experience that other boaters should also keep in mind.

First, Glenn said, with the weather as bad as it was, he should have stayed out in the open ocean and waited for a calmer weather window before attempting to enter the harbor.

“You never expect your engine to fail — but I should have stayed out at sea until the winds calmed down,” Glenn said.

Glenn said having another individual on board when sailing in rough conditions is also important. And if he’d had another crewmember aboard, that might have kept him from becoming stranded on the rocks.

“If I would have had someone else on board, they could have sailed the boat while I worked to try and fix the engine — but I couldn’t do that alone,” Glenn said.

Once he realized the boat was going to crash into the rocks, Glenn said he made the mistake of jumping toward the rocks instead of into the water, where he could then swim to shore. While he only endured an injured ankle and some bloodied shins, “that was a mistake, because the boat could have crushed me against the rocks,” he said.

Glenn was wearing a float coat, which he said came in very handy. The jacket with built-in flotation allowed him to dive underwater and out of harm’s way, but still pushed him to the surface.

“The life preservers that go around your neck don’t allow you to swim below the surface, so I was glad I had the float jacket on,” Glenn said. He also noted that the jacket doubled as an added layer of protection for his ribs and stomach, as the padding kept his vital organs and ribs from injury when he was being tossed against the rocks.